From California to The Chocolate Factory and beyond, Kathryn Davey is experimenting with native plants to create unique, natural dyes.

The first thing to hit you in Kathryn Davey‘s studio is the sweet fragrance of cedar incense, burning on a saucer. Originally from Knocklyon, Kathryn moved to California in her twenties. “I got back to Ireland a little over two years ago, and I’ve had this studio for about a year and a half.” Based in The Chocolate Factory on Kings Inn Street in Dublin, Kathryn runs natural dyeing and indigo Shibori workshops. The quirk to the entire operation is that Kathryn’s approach involves using Irish plants as ingredients.

The studio is a long, white-walled space with a high slanted ceiling. Bright folds of fabrics are arranged in wooden cabinets, fettered with Kathryn’s signature labelling. A rusted tractor seat, found by Kathryn abandoned in a lane by her house, makes for a stool, and a gradient of aprons ranging from earthy greys to indigos hang on a rail. All over the room are baskets carrying the fruits of her gatherings for creating dye. 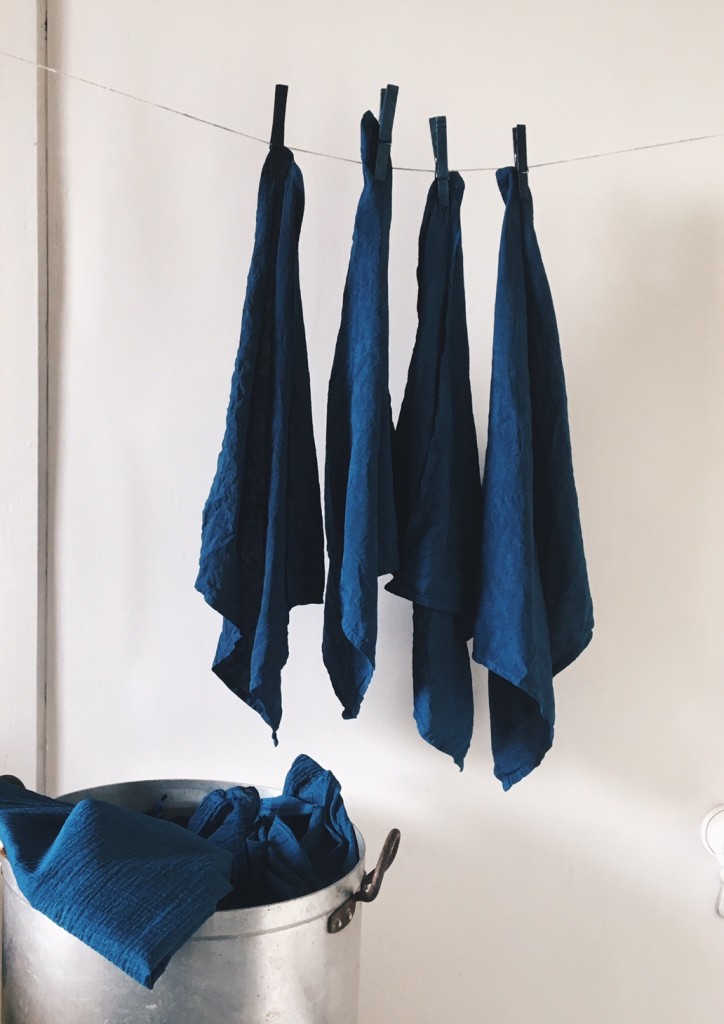 Kathryn first got involved in the natural-dyeing scene while living in the Bay Area of California. “There was a really strong creative community there and I was just exposed to a lot of this stuff.” The warm climate there made sourcing ingredients for the dye and the dyeing process a lot smoother. “It’s so easy there for plants to grow. You put something in the ground and because the sun shines, it grows.”

In moving to Ireland, Kathryn felt the need to “re-learn a lot of things, depending on what I could or couldn’t get here.” However, while there may not be a wealth of Californian tropical plants growing in Irish soil, Kathryn is exploring Ireland’s offering. “There seems to be more tree-based plant dyes here that I’m more aware of now. I’m trying to learn the dyes that I can get that are native to and available in Ireland.”

Leaning against the white workbench in the centre of her studio, Kathryn stresses the importance of research before beginning the dyeing process. “I’ll read up on the colours you can get from the plant. Depending on the time of the year you either use the twig, the bark, the leaves, the fruit or the flower. Sometimes I’ll wait until a certain time of the year if I’m going for a certain colour.” 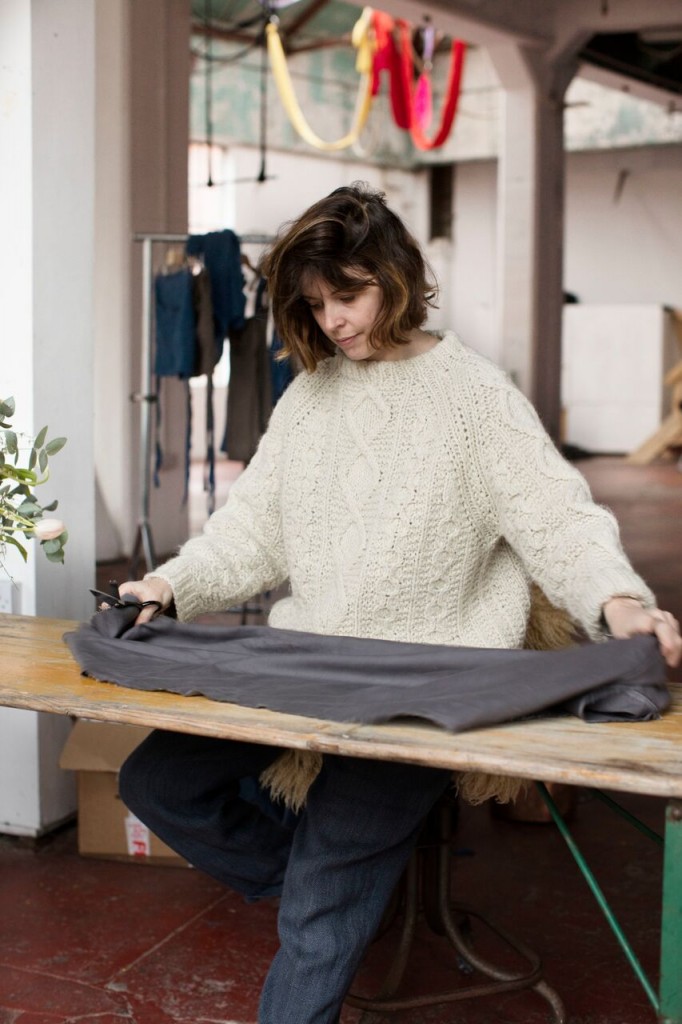 Davey cutting a length of her naturally-dyed fabric.

Something that Kathryn is perpetually surprised by with dyeing is the range of hues that can be made from some of the most unexpected ingredients. Bl’s cafe in The Chocolate Factory donate redundant avocado pits to Kathryn, which she then uses for dyeing. “They make a gorgeous pink. You really wouldn’t expect it. That’s the thing with natural dyes; you can get colour from almost anything.” Another way to make pink tones, according to Kathryn, is by using Hibiscus flowers. “They give off lovely pinks, reds and purples.”

The native Irish plant that was the biggest revelation for Kathryn was the alder tree, indigenous to watersides nationwide. “It grows on the banks of rivers quite often and it has these lovely little alder cones.” Every time we speak about dyeing using a particular plant or ingredient, Kathryn reaches into a different corner of the room and pulls out a box, or a notebook, with slips of dyed linen to show me the end result. “The alder was the one that blew me away – the olive green it makes, I wasn’t expecting it.”

The average Irish gardener might be surprised by the hidden dye ingredients to be found in their garden. Those with a vegetable patch ought to look at their yellow-skin onions in a new light, as Kathryn feels they are a good ingredient for novices to begin natural-dyeing with. “You gather them for a few weeks beforehand, and then when you have a load of them you put them in the pot, boil it up for about two hours, strain it, and then let your fabric sit there for as long as you want.” 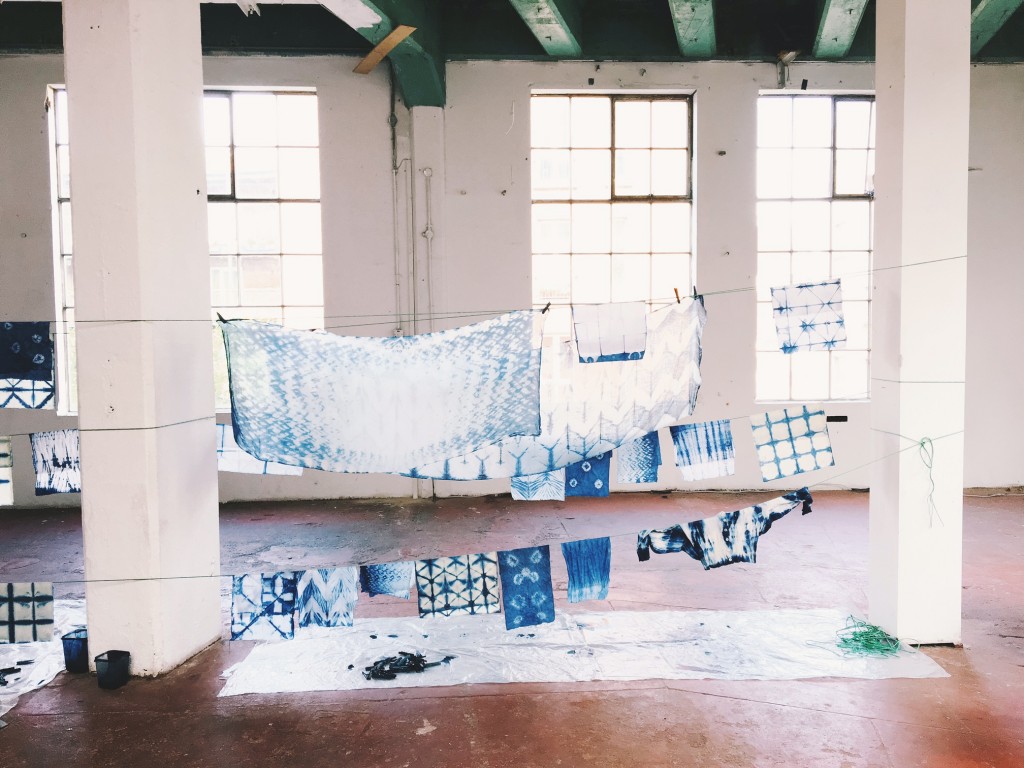 A series of samples of student’s work hanging to dry following one of Davey’s shibori-dye workshops.

Flipping through one notebook, she shows me the linen samples of sunny primrose tones made by the onion skins. “They’re a really warm, yellow colour.” The biting sting of a garden nettle translates to a contrastingly meek tone when used in dyeing, as Kathryn shows by holding up off-white rectangles of fabric. “Look at this lovely beige!”

Kathryn pauses a moment before dipping into the very end of the studio to pull out a beautiful wicker basket bearing a bundle of wrinkled brown balls, some dusted and aged, while others appearing new and glossy. “I gathered these things called oak galls, from the oak tree. They’re made when the wasp comes in and lays its eggs inside, around September, October time. You get nice dark greys and blacks from them.”

There are several more Irish plants that Kathryn is flirting with the idea of using. “Bracken, which is really readily available for us here in Ireland – I’m going to incorporate that into my next natural dye workshop.” Willow is also on the agenda, as well as the elderflower, a plant that creates beautiful mustard tones.

Part of the charm of the natural-dyeing process is in the element of surprise. Holding out a swatch of nutty brown linen, Kathryn informs me the colour was a result of a happy mistake. “This is what it looked like before,” she says, pointing to a purple tone. “Then I left it out to dry, and then it rained, and because of the PH balance, it changed and turned to this brown colour. There’s so much science to it, and I’m not a scientist.” However, she concedes, “All of this is really open to experiment, which is the great thing about it.”

We finish on a simple note, as she pauses while speaking about the life cycle of plants. “We can get what we need from nature, I think, a lot of the time.” It is this simple ethos that makes Kathryn Davey’s approach to dyeing and design as fresh as the blooming buds she gathers as ingredients.