Jen Says Justin Is Best Thing To Happen To Her 40s

We are committed Jennifer Aniston fangirls in IMAGE.ie. The woman just seems so damn content. She has the skin of a goddess, her highlights never go yellow, and she’s been managing the intrusive tabloid media this past decade with a grace no other celebrity would be capable of.

She also comes across like a super together and great person in interviews. If ever there was a woman who seemed to have her priorities prioritised it’s Jennifer Aniston. While headlines are still generated over the fact she’s divorced, like a lot of people, and childless, like a lot of people, she goes about her life, making movies and launching skincare ranges. She’s even thinking about writing a healthy cookbook. The 46-year-old is finally starring in films that deserve her talent, like this year’s gruelling Cake. And then there’s the matter of her engagement to the very handsome writer and actor Justin Theroux, who she describes meeting as the best thing to happen to her in her forties.

Can we all pause and say ?Awwwwwwww?? 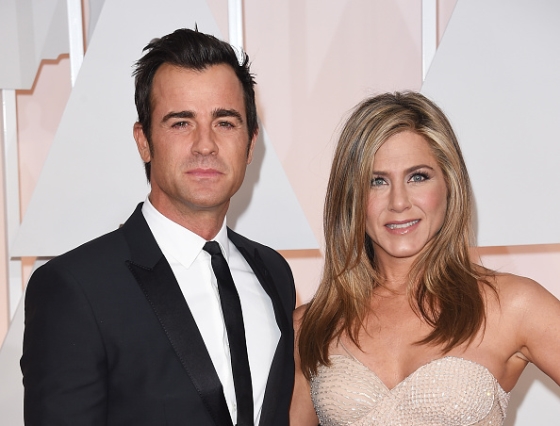 PEOPLE report that when the Friends actress was asked what the best thing to her forties was she said ?Justin. He’s the best thing this decade.” Take that made up news stories about this pair always being on the rocks.

Jennifer also recounted to the magazine about her and Justin’s first meeting. The couple first encountered each other on the Hawaii set of 2008 comedy Tropic Thunder, which Justin wrote. Jen was on set when Justin walked into her vision. “He was wearing black, black, black and I started to sweat just looking at him,” she said. Someone write this sexy meet-cute into an upcoming romantic drama script, please. Another reason to love Jen – hot men make her sweat.

Jen also spoke to PEOPLE about Justin’s good taste when it comes to jewellery. She said The Leftovers star picked out the perfect engagement ring for her, “I just think it’s so beautiful. I love it because he picked it, put it into a setting and it’s simple.” She also said that when the two marry, Justin will wear a ring inscribed with perhaps her name on the inside.

Sorry to be patronising, but aren’t you just so happy for Jen?