Last chance to see – PhotoIreland, the photography festival you can enjoy from the comfort of your couch

The 11th PhotoIreland Festival closes on Sunday, and despite the challenges of pivoting to an almost exclusively online event, the transition feels almost prescient. Organisers Ãngel Luis González and Julia Gelezova explain the pros and cons of organising an exhibition during a lockdown, and some of this year’s themes

“We had booked The Cube in Project Arts Centre to be the festival’s main space this year, however, things quickly developed in March, and like many other spaces, it had to close. We continued adapting to create Plan B, then C, D… it was a fight against a possible cancellation as much as to ensure a substantial programme. We figured out that some of these performances could very well be delivered online, so we worked around that format and searched for ways to complement it.”

The adage of one door closing and another opening is especially piquant for PhotoIreland director Ãngel Luis González, whose annual event usually comprises exhibitions, talks, screenings and live performance across Dublin city’s galleries and arts spaces.

Fortuitously, this year’s programme entitled ON/OFF had already planned to be a crossover of photography and performance, which meant the shift from offline to mostly online wasn’t as fraught as it might have been compared to, say, a more painting or drawing-led event. Furthermore, contemporary photography is largely a digital medium – a burgeoning renaissance for film photography notwithstanding – so much less of a leap. That’s not to say it has been all plain sailing, though.

“The biggest challenge was time,” says general manager Julia Gelezova. “We collaborate with many artists and organisations every year, but always with plenty of time in advance. It got tricky to realign everyone’s schedules in such a short timeframe, especially after the lull of the first hit of the pandemic, when everyone was in a limbo and not as active. Then, we suddenly jumped headfirst into new work.

“This was also a triumph, though. With so much uncertainty and anxiety currently experienced by the arts community worldwide, it is an amazing feeling to be able to keep collaborating over great distances, with organisations, curators and artists you admire and respect.”

How much, if at all, has the lockdown informed the content of featured works?

ÁNGEL: We were already planning on having digital content and a collaboration with Fotomuseum Winterthur and The Photographers Gallery London, but a significant part of this initial collaboration still required a physical audience (although the content would have been partially digital). It was just a matter of adapting this collaboration to make it exclusively for a virtual audience.

We had to cancel some exhibitions which were to happen in other venues that would not have reopened in time for the festival, and some events that required the physical attendance of the artist and an audience. It was also a perfect opportunity to finally dedicate time to launch the new OVER Journal. In it, readers will find some reflections on current issues that indeed were highlighted during the lockdown, such as those relating to racism, injustice and social inequalities.

A sizeable focus this year is on the influence of digital monopolies, ie Google, on artistic practice as well as intellectual copyright. Was that by design or by coincidence, given the festival’s forced migration to online this year?

JULIA: It was very much “by design.” An integral part of how we work is focused on creating projects through collaborations that reflect on contemporary society. These aim to motivate critical conversations on current affairs. To take digital content seriously we have to go beyond producing online slideshows and videos, or facilitating Instagram takeovers – it requires a serious level of curation and therefore a certain expertise and knowledge to engage audiences as much as any theme or subject.

We approached the digital curators of Fotomuseum Winterthur (Marco de Mutiis, Doris Gassert, Mona Schubert) and The Photographers Gallery London (Jon Uriarte), as we’d been following their work for a long time, and admired what they have achieved. They engage playfully, not only with what photography means today, but with anything to do with contemporary visual culture. As digital curators, they question our everyday life on the digital stage where it happens, discussing the concerns and opportunities that these channels present. With the exodus online, it is more important than ever to learn and be informed about the online culture and our role and responsibilities within.

The programme presents two international artists investigating the influence of digital monopolies, focusing on the Google Arts and Culture Project: Mario Santamária and Geraldine Juarez, as part of “The Googlified Image” virtual events. Irish artist Conor McGarrigle, who is part of our “Screen Walk” event, looks at the relationships between algorithms, data and images through the lens of his two internet projects (“BitTorrent Trilogy” and “24hour Social”) that are separated by a decade. Meanwhile, the Albanian Berlin-based artist Anna Ehrenstein offers a starting point to “decolonise lens-based practices”, with her unique digital style.

Also under the microscope are how these digital juggernauts further perpetuate the received “wisdom” of the Western/colonial art world. Which, with Black  Lives Matter, is more prescient than ever. Again, was that theme – the colonial gaze – something the artists had long set out to explore, and how has current discourse evolved, or informed, the project?

ÁNGEL: These themes were being explored by the artists for a long time. We’d been working with Anna Ehrenstein for months, focusing on her use of Instagram as a space for critical reflection – on the fly, hyper-current, and with that visual vocabulary that lives on Instagram.

And then “The Googlified Image” is part of a bigger programme by Fotomuseum Winterthur that extends beyond the festival and that also looks at the politics of seeing and being seen, of being recognised and acknowledged – themes that are always related to power interests that shape our social reality. So yes, these are all themes that the artists, ourselves, and the collaborating organisations, had set out to explore before recent events.

“The Googlified Image” critically looks at the hidden power dynamics behind the Google Arts and Culture Project, as well as the perpetuation and reinforcement of Western capitalist and colonial gazes, which continue to shape knowledge formation. Geraldine Juãrez critically dissects the history of the Google Cultural Institute in relation to colonial and imperial practices of prospecting, documenting and exhibiting, which are crucial to rendering the imaginaries that consolidate the power of the West and its institutions.

In her screen intervention “The Fish Don’t See the Water”, Juãrez contextualises the data-prospecting of art historical collections and their architectures executed by the Google Cultural Institute in the form of philanthropy, thus mirroring the very practices from which they emerged.

It’s so interesting to hear that you’re also  launching OVER Journal. There’s a received wisdom that magazines are irrelevant; meanwhile new, high class, high quality, design and fashion led indie quarterlies are popping up all over the place. What do you say to the “print is dead” argument?

JULIA: In the rush to digital, it seems people have forgotten a great medium that returns again and again to reclaim its importance: print publishing. We definitely don’t pay any heed to the “print is dead” argument.

People like to make grand claims that this, or that, is over, including photography (hence the name of our journal!). Though anybody who works in the arts and publishing knows a different truth. There are great print-related initiatives and new publications coming out almost every week, as we know first hand by running our art bookshop The Library Project, not to mention our own publishing initiatives. We are in the right position to make an informed decision regarding this, we know the space that OVER Journal is going to fill in, and so we pressed ‘Print’ in full confidence!

For now, OVER Journal will appear in print once a year, and online monthly with features of all sizes to keep readers engaged. 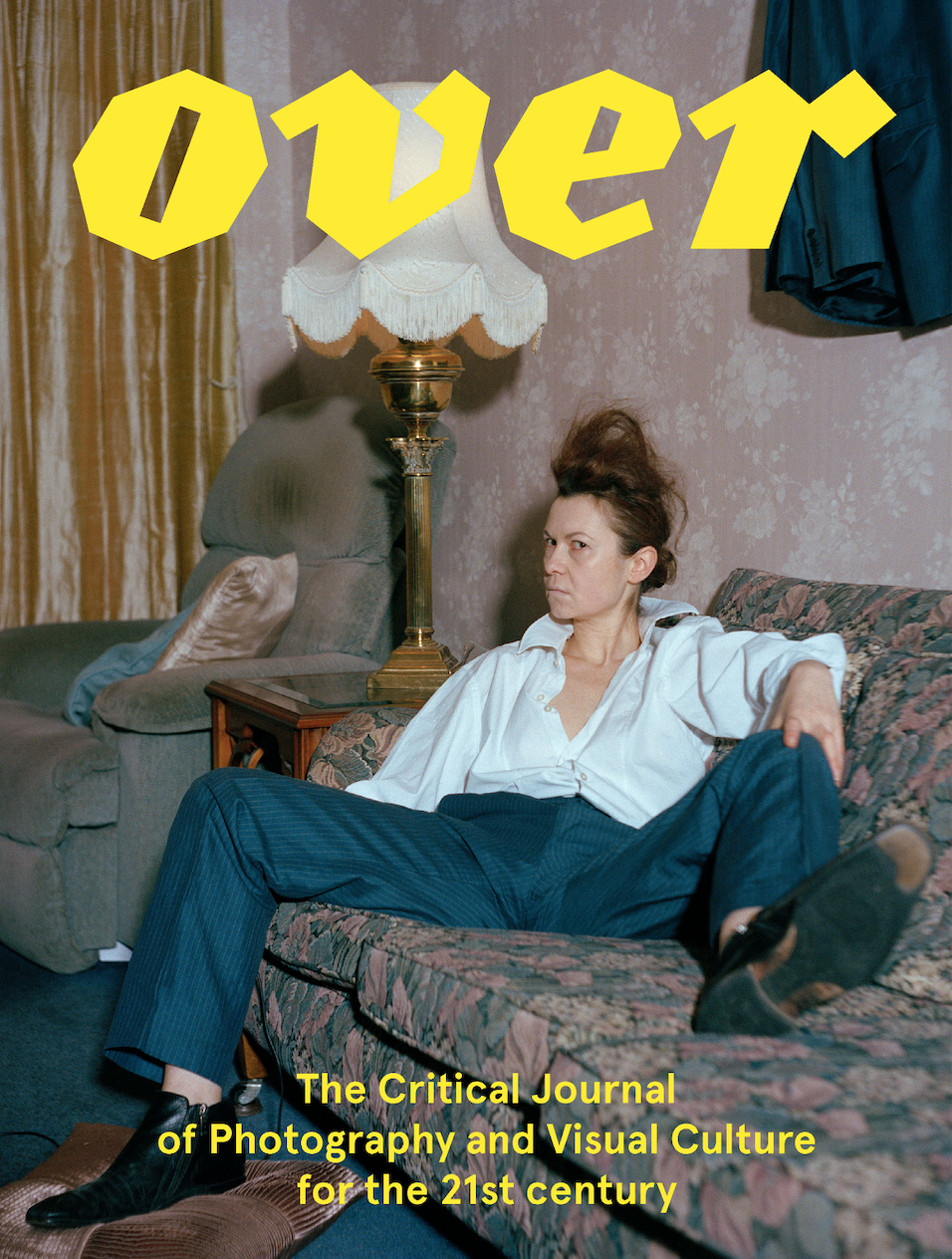 Read more: A new crowdfunded photography project is set to brighten up the shuttered streets of Dublin

Read more: You don’t have to be a Medici to support and champion artists