Irish activist Sinéad Burke on the cover of Business Of Fashion

Activist and academic Sinéad Burke has had a remarkable few years, but appearing on the cover and in the pages of Business Of Fashion might be her most impressive accomplishment yet. The three-and-a-half-foot activist is also a writer, an academic and a broadcaster, and if that wasn’t enough, her popular for her TED talk entitled ‘Why design should include everyone’ is currently sitting at over one million views. Debating the Age Of Influence, this month’s edition of Business of Fashion, comes with two powerful covers; one Sinead Burke, the other Kim Kardashian West. Sinéad was shot by legendary photographer Tim Walker for this special-edition magazine. 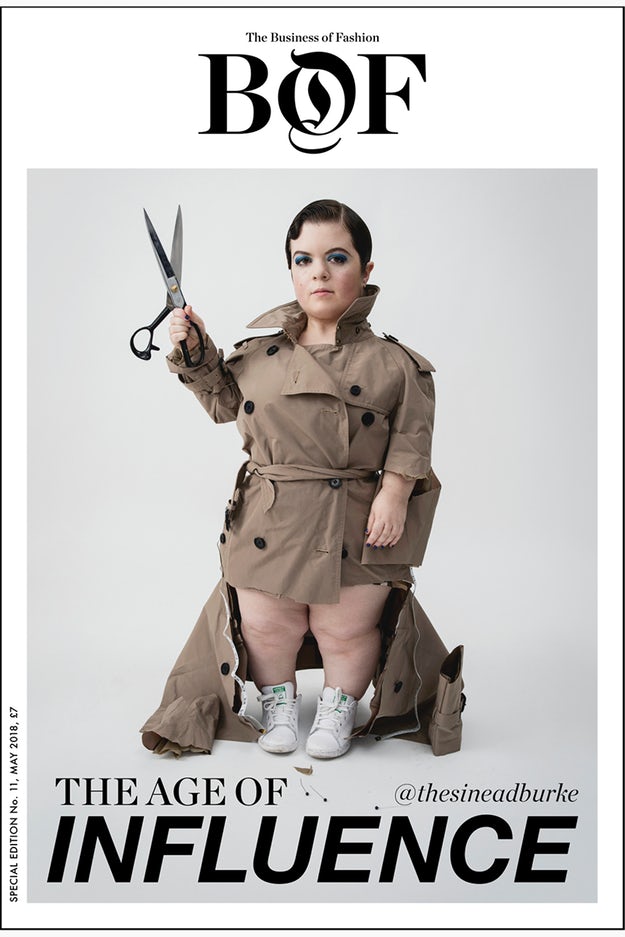 The cover shows Sinead wearing a custom Burberry trench which has been deconstructed to fit the dimensions of her body. She’s also wearing lace-up Addidas Stan Smith’s with slick-back, retro hair. In her hands are a pair of scissors. This image is, in essence, a true vision of what Sinead represents – growth, change, awareness, appreciation, innovation. 2017 was a big year for Sinead having successfully campaigned to have the correct term for little people – Duine Beag – added to the Irish language dictionary. Sinead also attended The White House to be among other thought-leaders in the industry, she was Ireland’s only female delegate to attend Davos, she continually highlights living in a world not built for her, she has used her voice to stop some of the biggest fashion houses in the world in their tracks, and all while working hard to build the coolest black-book of friends.

She’s no stranger to our superhero radar and yet Sinead Burke continues to surprise and amaze with her ambition and vision. The intelligence, wit, and passion she has for her cause have the ability to lighten up a darkened room and she is undoubtedly a powerful and courageous force of nature. We suspect 2018 will be an even busier year for her as she continues to harmonise and reshape the fashion industry. We salute you, Sinead.