Turning down Tom Cruise is all in a day’s work for Juliette Binoche. The French actress hasn’t survived three decades in the business by simply?”going with the flow”. Here, she shares some of the secrets of her incredible success with Stephen Milton.

?I quite like this game,? remarks Juliette Binoche, curling a dark lock round her ear. ?Tell me, what else is there??

Rumours have long swirled over the significant Hollywood roles rejected by the French Oscar-winner. Much has often been made of a choice to turn down Jurassic Park, which she curtly states, ?was a timing problem?. And what of suggestions she turned down Schindler’s List? Binoche snorts and rolls her light brown eyes. ?And say no to Spielberg again,? she cries. ?I would not do such a thing.?

What about Braveheart, I ask, and the role of Isabella of France, ultimately played by Sophie Marceau? ?There was never any conversation on that. But I would have loved it, just to film in the fields and beauty of Ireland. I love it there.? Or Mission Impossible with Tom Cruise? She offers a crooked grin. ?Yes, I met Tom, we discussed that. But it did not work for me. He wanted me to do these tests, physical tests and I ?? Juliette pauses and carefully ponders her words. ?? I didn’t agree to this. That was not my style. It just, it didn’t fit me.?

It’s a fitting example of Binoche’s flagrant disregard for the Hollywood rule book.

Since a startling, tortured breakthrough in Philip Kaufman’s The Unbearable Lightness of Being alongside Daniel Day-Lewis nearly 30 years ago, Tinseltown was transfixed with the Parisian’s enchanting stoicism and ethereal soft features. The daughter of celebrated artistes, actress Monique Stalens and director Jean-Marie Binoche, was inundated with offers after the film’s release. Everyone from Spielberg to Cruise wanted to work with the Gallic sensation. But the mainstream proved little interest for the star.

She parlayed her talents with independent, intellectualised fare: Louis Malle’s Damage and Krzysztof Kieslowski’s Three Colours trilogy. ?It could have been so very different,? she says, sitting upright on a long cream couch in a bright Central London hotel suite where we meet. ?I could have moved to Los Angeles, said yes to work, yes to these offers. But it felt like I was giving something up. My spirit, my freedom. It felt like I would maybe lose that if I pursued more mainstream. ?There were those who thought I was being silly. Maybe crazy, perhaps. But independent cinema, European cinema – they belonged to me more. ?And after I won the Oscar for The English Patient, more and more offers came through, but I wasn’t ready to walk through those doors. I had no desire.?

In the flesh, she’s quietly luminous. With dark hair, short and sculpted round her poised structure, her eyes flash and captivate, though she maintains an air of cool detachment. An introductory handshake is limp and lazy. At 51, the former face of Lanc’me wears a fresh, breathable complexion with minimal make-up. Signs of ageing crinkle and smatter her features, but Binoche appears nonplussed by talk of youth and beauty. ?It’s natural, maybe normal to feel this way, to want to stay young. But luckily, I’ve never felt that compulsion to cling onto something we have no control over. The only way for me to stay young is to let go of youth.?

We meet today to talk about her new film, The 33. Based on the 2010 Chilean mining disaster and subsequent rescue of 33 miners who remained entombed for 69 days, it’s a powerful reimagining of these events, which were watched by billions around the globe. ?I was as gripped as the rest of the world,? Juliette tells me about the real-life events. ?It was something so miraculous, born out of tragedy. It was truly amazing and heartbreaking and astonishing.?

In a role initially intended for Jennifer Lopez, Binoche plays Mar?a Segovia, whose brother, Dario, was among those trapped underground. She became the chief voice of uproar after government officials failed to act fast enough in the initial days of the mine collapse.

?It was women like Mar?a, who were the catalyst for action, who made this story happen,? she says, casually chic in a starchy white shirt and low black heels. ?Nobody wanted to save these men. It was too much of an inconvenience. The mine was privately owned, the government didn’t care, and the mine owners didn’t have the money to help bring in the equipment needed. ?Maria was the voice. A force of nature, but not in an angry way, a positive way. She shouted at the top of her lungs, ?Save my brother, save our men.? These women made sure the journalists came from around the world. And the government wanted to do something when they heard this roar.?

An uplifting, miraculous story, it reminded the star about the power and virtue of survival.

?We must always keep going. Never give up. These people faced extraordinary, dire circumstances, but they never gave up. And it’s why we should never do the same, for others and ourselves.? 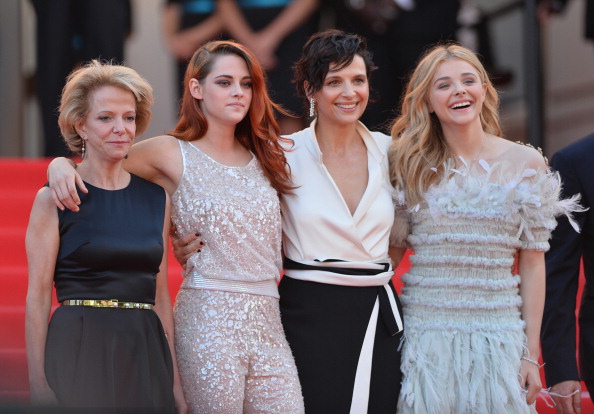 Mum to son Rapha?l, 22, from her relationship with professional scuba diver Andr? Halle, and 16-year-old daughter Hana, with actor Beno?t Magimel, Binoche has balanced motherhood with an exhaustive professional pace. In the past three years, she’s clocked nearly a dozen movies, including romance Words and Pictures with Clive Owen, claustrophobic drama, Clouds of Sils Maria with Kristen Stewart, and a surprising appearance in monstrous blockbuster Godzilla – ?a favour to my son,? she says.

It comes after a time when Juliette took some time out after turning 40 to contemplate her screen career. ?There was a period when I wanted to stop. I didn’t want to work. But that was a choice. I was fed-up, I had no real desire to be in movies. You reach a time in your life when you hit a wall. A crossroads. Something needs a change.? A transition in the availability of roles? An often vocalised problem for actresses in the industry? ?It wasn’t anything to do with getting parts or work. I just needed a break away for a while. I needed some alone time, with my family, with my thoughts, and other creative outlets.

?And it was good for me. Because now, I’m free and satisfied and working on interesting productions. And ultimately, I’m really very happy.?

This article was originally published in the February issue of IMAGE Magazine.