It’s hard to believe it’s been two years since hundreds of thousands of women from around the world came out, united and determined, to protest to the inauguration of Donald Trump.

Coverage was everywhere; every major news channel live-streamed the entire main march in Washington – which became the largest presidential protest march in history – while worldwide, over 700 sister marches took place in solidarity. People took time to don pink hats, make banners and walk, cheer and chant for a better future – together, they made plain their vision for something great, and it was starkly different to Trump’s grim promise for America. Yes, we want change, but not by building walls, imposing threats and scrapping civil, LGBT and women’s rights; our change comes in the form of unity, and acts of love and genuine goodness that means we, as women, have the basic rights we’re entitled to.

Two years on, much has and has not, changed. Trump remains as narcissistic as ever, immersed almost solely in his own bigotry; among his ‘accomplishments’ are shutting down Government until he finds a way to build a wall on the US border with Mexico and literally tearing children away from their families.

Related: ‘You don’t love me anymore’: The children still suffering the trauma of Trump’s family separation

We have grown stronger. #TimesUp and #MeToo are movements that will never be undone. More women are getting elected to office than ever before around the globe and here at home, Ireland made waves as it officially gave women the right to their own bodies and allowed them a choice.

It hasn’t been easy. Women have also been greatly let down.

Related: Emma Mhic Mhathúna and our constant fight as women in Ireland

But, my God, we are trying, despite the turmoil. 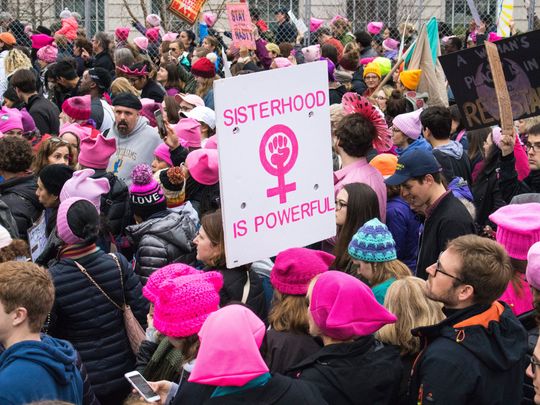 Despite everyone still debating what will become of Brexit.

And today, thousands marched on behalf of women, for women in “pink pussy hats” in the third year of the now annual Women’s March. The premise remains. Women fighting for and demanding equal rights, demanding choice. The refusal to stay silent is as strong as ever. The National Women’s March organisation march has been surrounded by some controversy, including allegations of anti-Semitism and disputes over who gets to own and define the Women’s March, but we have chosen to focus on the positive; the women who are out marching, rallying and vying for our constant fight for change.  And for each other.

Marchers highlighted a multitude of issues around the world. Some protested Trump’s plan for a border wall, others highlighted reproductive rights and more than one group of marchers called for an end to the Trump administration’s ban on travellers from some majority-Muslim countries.

Below are some of our favourite moments from this year’s march, the #WomensWave:

Love all of the poster creativity, especially the one that says, “No old white guys 2020!” ?#WomensWave #WomensMarch2019 pic.twitter.com/6HL3Dom1QK

BEAUTIFUL signs are flooding the streets of DC!