Hundreds of Irish children rally together for climate change protest

Around 800 Irish young people staged a protest outside Leinster House this weekend to show their support for Climate Case Ireland. The Children’s Rally highlighted the fact that the young people of the world – and the generations that will follow them – will face the worst consequences of climate change.

According to the organisers, the youngsters were there to play their part in publicly expressing their concern and disappointment in relation to the Irish government’s lack of significant action regarding climate change; highlighting how young and future generations stand to face the worst consequences of climate change, despite not yet having the right to vote.

Related: UN report reveals that climate change effects are much worse than we thought

The rally took place three days before Friends of the Irish Environment’s landmark hearing in court (due to take place this coming Tuesday), which aims to compel the Government to take the required action to mitigate the climate catastrophe facing future generations – as it stands, the current 2017 National Mitigation Plan does not fulfil Ireland’s human rights obligations.

“It is us, the children of this generation who […] will have to pick up the broken pieces of our world once we become adults.”

The speakers of the rally – some of who were only 11-years-old – gathered first at The Department of Communications, Climate Action and Environment, post a symbolic message of concern to Minister Richard Bruton.

“Children need their voices to be heard”

“I won’t have a vote for another seven years. But another seven years of greenhouse gas emissions will be a disaster,” said 11-year-old Nicole Murray from Kilkenny, who spoke at the protest. “Children need their voices to be heard! We always think of Ireland as a green country, but if we continue as we are, it will be nothing but a dump. To me wildlife is very important. But we are being very selfish, and we’re not taking care of animals and fish as we fill the oceans and beaches up with plastic.” 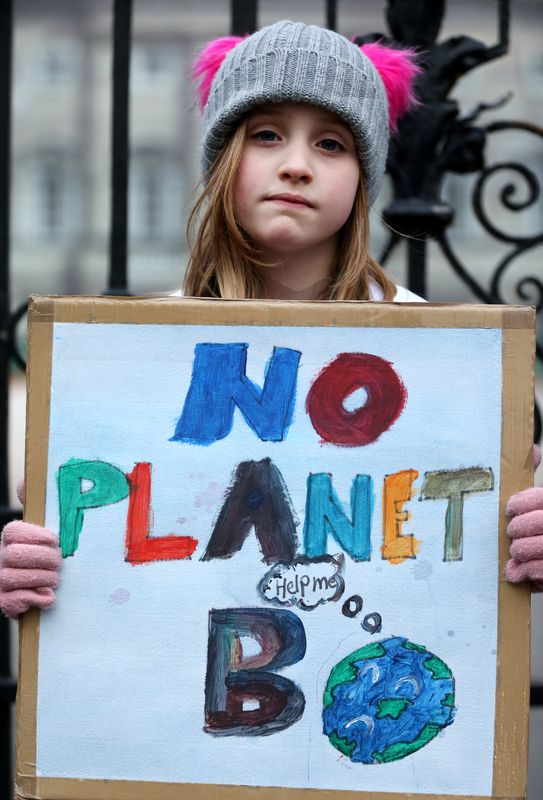 Another young speaker, Flossie Connelly said she believes in “less anger about the planet dying and more positivity in saving the planet – be positive and do something about it…simple as that!” The 11-year-old is a mini marine environmentalist who has has been cleaning beaches weekly for nearly two years now. She says she is passionate about the sea and the damage the plastic is doing to the marine life.

Related: 15-year-old activist tells UN climate negotiators that they are ‘not mature enough’

Sophie Gibbons, a 16-year-old Transition Year student in South Dublin added that she is deeply concerned about climate change and the destruction of the natural world.

“It is us, the children of this generation who […] will have to pick up the broken pieces of our world once we become adults. Our children may never know what an elephant or a tiger is because they were all killed off before they were even born. Even the birds are disappearing. I admire what the school strikers are doing and I would love to see it happen in Ireland – and in my own school.”