It is cheap, perceived as harmless and results in a giggling euphoria. What festival-goers don’t understand, however, is that laughing gas can kill. Amanda Cassidy reports

On just one Saturday night in a trendy part of London, over a thousand tiny empty silver canisters were confiscated from club-goers by police.

At Pride festival this year in Brighton, revellers discarded thousands of laughing gas canisters and balloons on Brighton beach after the festivities, leading to criticism by environmentalists.

Nitrous gas is commonly called ‘laughing gas’, ‘nox’ or ‘hippy crack’ and is the same drug given to women during childbirth or those having certain dental procedures. 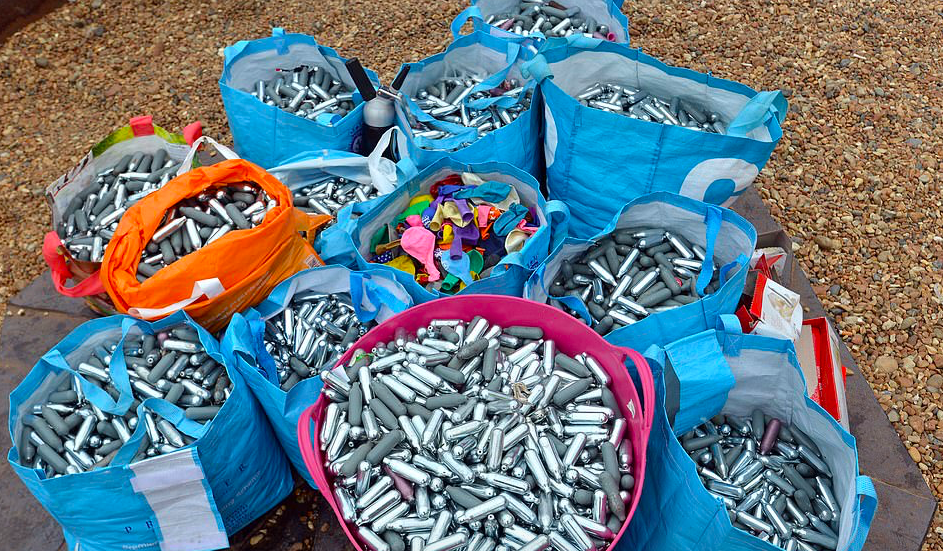 And despite its reputation as a ‘soft drug’, nitrous oxide for recreational use is on the rise, and there are now calls for clearer information campaigns to educate young people about its long-term effects.

According to Irish legislation, it is illegal to sell this substance for human consumption. It’s also illegal to consume it under the Criminal Justice (Psychoactive Substances) Act 2010. However, because of its use in the catering industry, the gas can be purchased in large quantities online with relative ease.

The HSE says it is monitoring the current trend which has become increasingly popular among festival-goers.

In a statement issued to IMAGE.ie, the HSE says that the risks associated with laughing gas have prompted action here. “During summer 2019, we launched an online survey in partnership with Trinity College Dublin to gather data on drug trends and harm reduction among Irish festival attendees. Unpublished preliminary data from over 1,000 respondents would indicate that use is an emerging issue among Irish festival-goers.

“As with many other substances, the quality and purity of nitrous oxide depends on the source. There are a number of risks associated with use, and it is known that death from suffocation or lack of oxygen can occur.

“Because of these risks, the HSE will include information regarding the associated risks and how to reduce the harms as part of our festival campaign work in 2020.

“There will also be new content added to the Drugs.ie website in quarter one of this year, which will include evidence-based information about nitrous oxide and both the short-term and long-term risks.”

Laughing gas is released from a canister known as a ‘whippet’ or users can inhale it directly from balloons. The effects can cause giddiness, dizziness and temporary euphoria.

But there are fears that many of those who inhale the laughing gas are simply unaware of the dangers of taking this drug regularly.

Breathing in high concentrations of laughing gas can cause health problems which include burns from the canister, a dangerously increased heart rate, choking, brain swelling, nerve damage, anemia and death. The gas can also cause serious psychological problems including paranoia.

There have been several deaths in the UK in recent years as a result of its use. There, nitrous oxide has now become the second most prevalent drug among young drug users, only falling behind cannabis use in 16-24-year-olds.

The head of mental health at the Royal College of Nursing in the UK, Catherine Gamble, has been very vocal on the issue. She believes that there is a significant “lack of understanding” of the impact that nitrous oxide has on the health and wellbeing of those using it.

“Despite the increasing use of nitrous oxide, particularly among younger people, far too few people know about the risks. It might give a short-term high but the long-term damage is no laughing matter,” she told a conference earlier this year.

Ethan runs a hostel in Dublin city centre. He says he has seen a rise in the number of nitrous oxide canisters left behind after people check out. “There seems to be more and more of it, people are sitting in and getting high off this gas before heading out. They seem to be having a great time and it is a lot less messy than those who are drinking but the problems arise when they seem to mix drinking with taking it. We’ve definitely seen a lot more people who seem to be taking it on nights out.”

UK figures show that, on average, five people a year die after inhaling the gas, and it caused 25 fatalities between 2010 and 2016. That’s according to figures from the Office of National Statistics.

But some point out that that marks fewer deaths than those killed each year by helium. David Nutt is a professor of Neuropsychopharmacology in London. He believes we don’t need to get so hysterical about its use. “I mean you can kill yourself obviously. If you breathe nothing but nitrous for 10 minutes you will die, but I don’t think there’s any evidence that nitrous kills people if you use it recreationally,” he told the BBC.

However, Dr. Anna Maria Rollin from the Royal College of Anaesthetists says that it is important for parents to understand that some of the dangers when it comes to laughing gas are not so funny. “At the end of the day, the risk of brain damage just isn’t worth it as far as I can tell.”

‘My brother died after taking a synthetic drug at a house party. Now I’m determined to turn my grief into something positive’