When my husband surprised me with the tickets to New York City, it was April 2017 and I was a little bit pregnant. The tickets were a gift for my birthday, we had been dying to go to New York as a couple for years. It was a thoughtful present that unfortunately had to go the way of all the presents he’s ever gifted me. Just like the weird celtic jewellery, the hairdryer, the other terrible jewellery, they had to be returned. You see I was the kind of little bit pregnant where you are round-the-clock nauseous and the only food you can bear the thought of allowing near your face is dry toast or Monster Munch (this may just be me, insert your own choice of beige snack here).

I couldn’t countenance going to New York without my eating game in the full of its health. We postponed the trip for two years. Two years. That is how committed I was to eating the hell out of New York and this past September, that is exactly what we did. Here follows our eating itinerary for all your New York eating needs.

But first a word on preparation: It is key. Do not make the rookie error of easing back on portions pre-NYC in a misguided attempt to “make space” for the demands of the trip. This a mistake and will only serve to make the New York eatathon more of a shock to the system. Better to exercise greed in the week preceding the trip. This will prepare you physically and mentally, after all no one runs a marathon out of nowhere, one must train and put in the sweat before undertaking physical exertion of any kind.

Our first stop on the eatathon was this fast foodery which has grown from a single family noodle shop into a quality fast food empire. In an inspiring embodiment of the American Dream, Xi’an Famous Foods started in a 200 square foot basement stall in Flushing, Queens in 2005, when Anthony Bourdain “discovered” it and a culinary star was born. The family, who immigrated from Xi’an in Northwestern China, were the first to bring this little-known style of Chinese cuisine to America. The dishes are hot, tangy and punchy with lots of cumin, Sichuan peppercorns and chillis. The noodles are wide, hand-pulled noodles called biang biang, you can see chefs teasing them out into great lengths in the open kitchen. We ordered the ‘spicy and tingly’ beef with noodles and pork in broth with hand-ripped noodles. The dining is super casual and prepare to eat standing at a counter if all the seats are occupied – it’s still totally worth it. The dishes, despite appearing to be mainly a riff on the combo of noodles and meat all boast distinctive flavours and are deeply satisfying. There are 13 locations to choose from. Visit Xianfoods.com 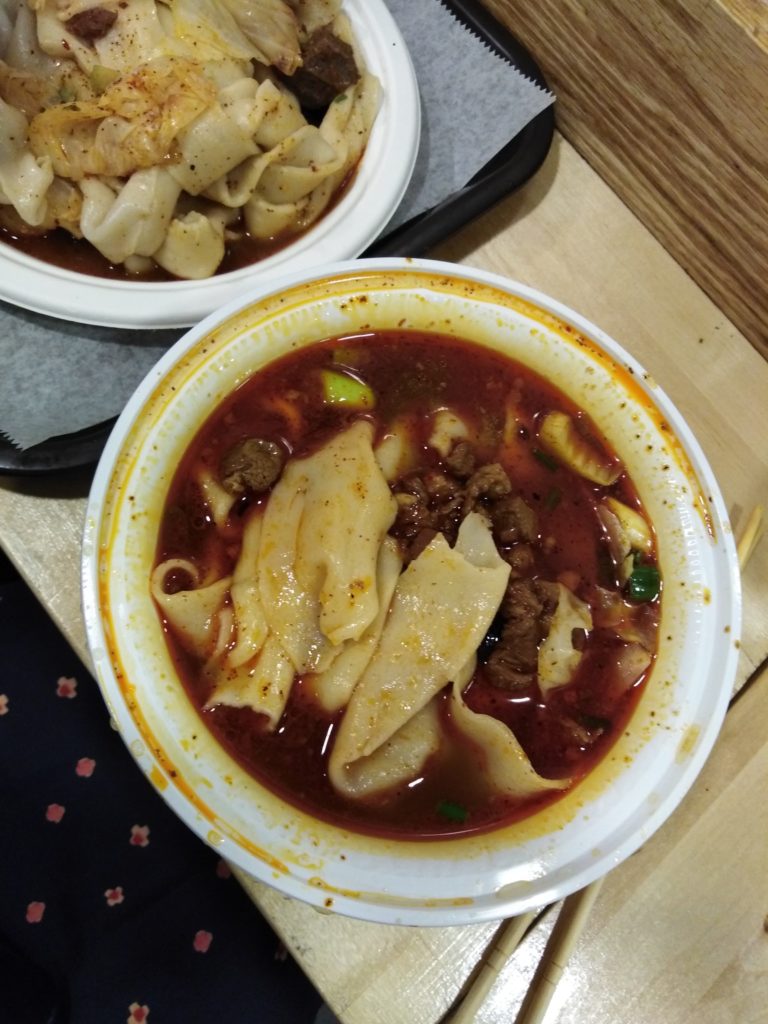 Brunch: Viand, Madison Ave (with another location on the West Side)

Here was a slice of classic Americana. This train carriage-like diner is straight out of any New York movie you care to remember, think When Harry Met Sally. It’s somewhere Nora Ephron might’ve doled out dating advice to her girlfriends. It’s always very satisfying when a place delivers on the kind of imaginary nostalgia that growing up on Meg Ryan movies has given us and Viand does just that. The place is tiny, the menu and portions enormous and the food is spot on. You’ve got your turkey on rye, your bagels, your oatmeal – everything anyone’s ever ordered in the movies. We had a stack of pancakes, eggs and bagels. It was immense. Visit Viandnyc.com 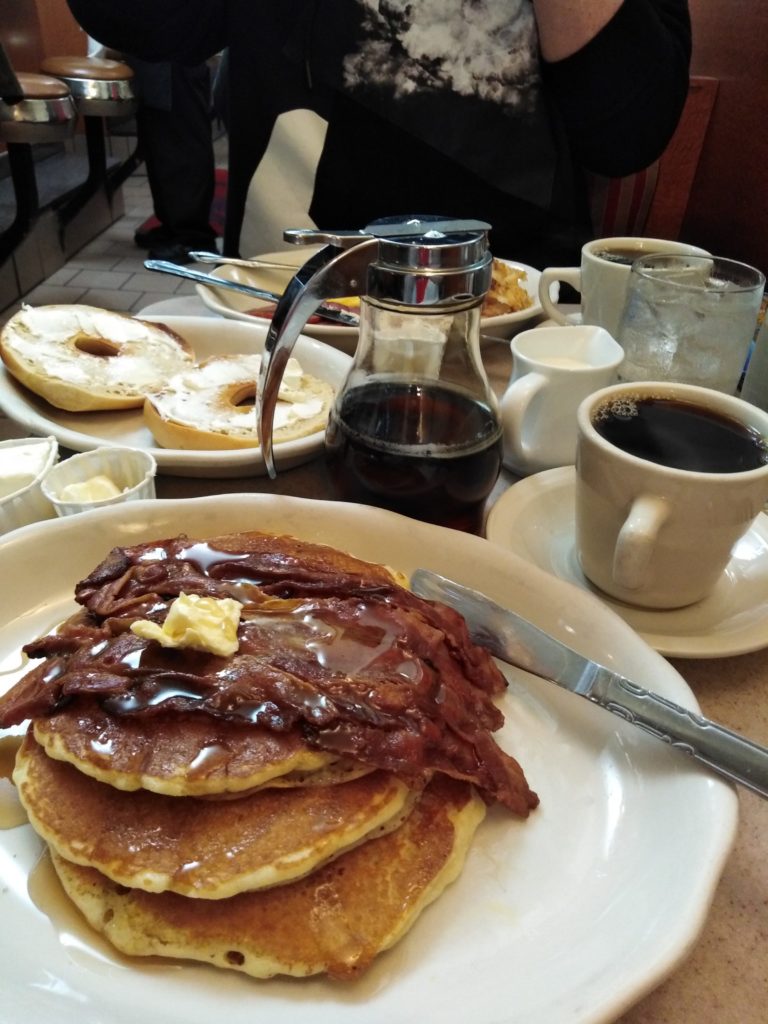 Dinner: PARM, Upper West side (and several other locations)

So if you have spent years obsessing over the food in The Sopranos as I have, this is the place for you. It’s a fairly casual Italian-American eatery that had me at “Parm”. At last, I would taste the mythical “chicken pawwwwm” as Carmella used to call it, it was divine. It came on a plate the size of the table and featured spicy pasta, crumbed chicken under a wedge of melted mozzarella and rich gravy (what we’d call tomato sauce).

We also ordered the classic spaghetti and meatballs – hearty sauce, fresh basil and tender meatballs definitely elevated this classic comfort food. Incredibly I still managed to shove in dessert and thank god I did, to miss the Parm Classic Ice Cream Cake would be to deprive oneself of one of the most adorable things I’ve ever eaten. Layers of vanilla, chocolate and strawberry ice cream are spread with frosting (that’s buttercream icing to the rest of us) and topped with a single maraschino cherry, surrounded by biscuit crumble and sprinkle. It was death by cuteness. Visit ParmNYC.com 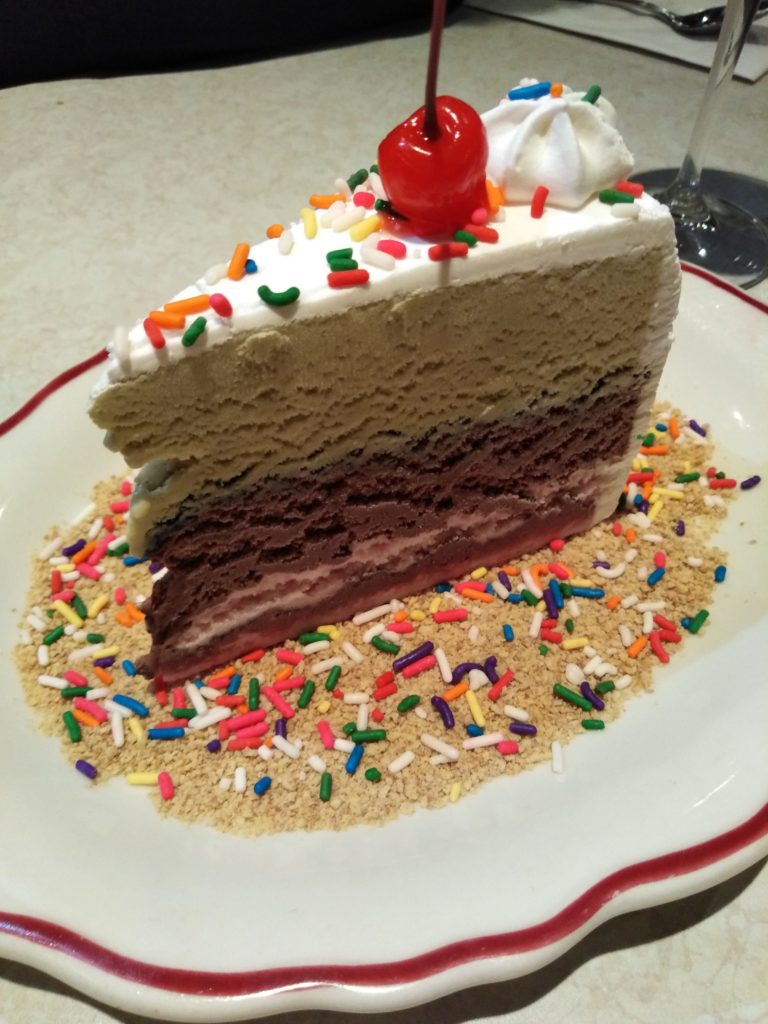 The chef-owner of Prune, an unassuming-looking cafe in the Lower East Side wrote a scalding and beautiful memoir a few years back called Blood, Bones and Butter which I devoured in one-sitting. After feasting on Gabrielle Hamilton’s words, I had always wanted to feast on her food. On the weekends, Prune deservedly draws long lines for the smart dishes that go above and beyond the usual breakfast fare. Naturally we were seduced by the Monte Christo – a triple decker sandwich of turkey, ham and swiss cheese, battered in savoury custard and deep-fried. I know, I know why did we hold back? We also ordered the Dutch pancake which is a single giant pancake cooked in a skillet and finished in the oven. Breakfast cake basically. Also on offer is all the classics, plus some left of centre additions such as sausages and oysters, the most intense smoked fish platter I’ve ever encountered and a spread called Youth Hostel breakfast that included liver wurst for the more adventurous out there. Visit Prunerestaurant.com 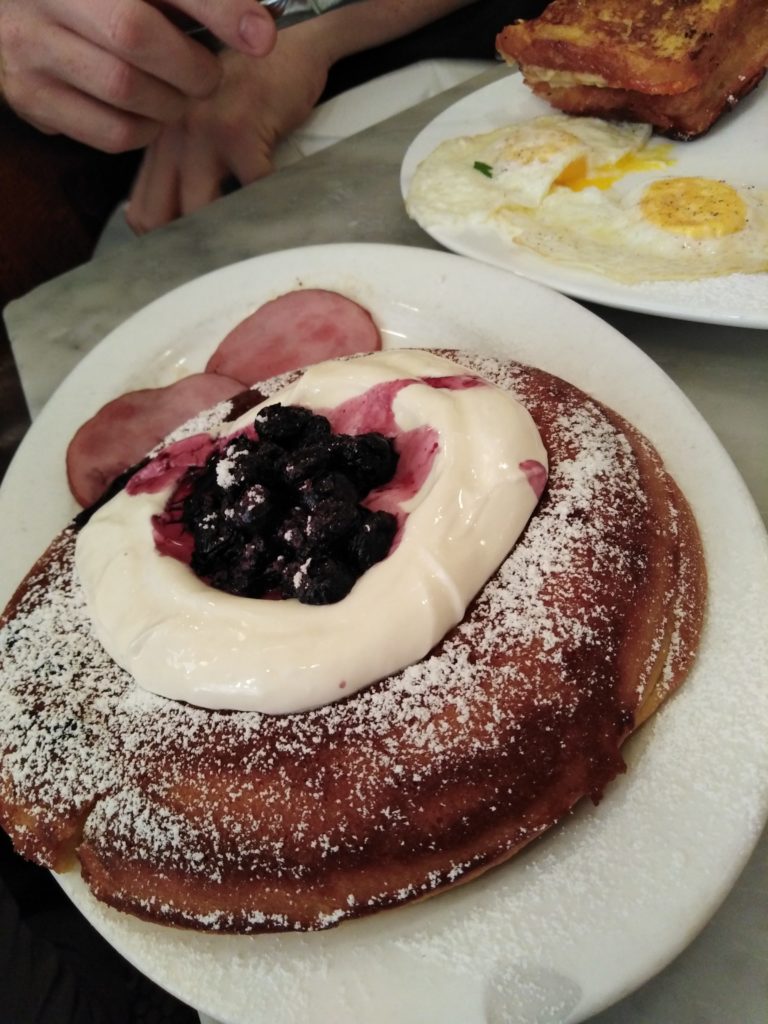 A neighbourhood Neapolitan pizza joint complete with foosball tables, a bar that opens onto the street and blaring tunes. Ovest was a wildcard when we stumbled off the Highline, hungry and looking for time to kill before going down the rabbit hole of Sleep No More, the immersive theatre performance that’s been running across the road in the McKittrick hotel for years now. We got lucky with this solid pizza purveyor and for once we didn’t over-order, a major breakthrough for me. Two chewy, perfectly blistered pizzas one leaden with cheese and Parma ham with rocket the other a gorgeous pairing of black olive and sausage were the perfect feed. Visit OvestNYC.com

For afters, we hit up an ice cream sandwich vendor and an obsession was born – with the Cocoa Daddy specifically – a pair of chewy chocolate chip cookies stuffed with salt caramel ice cream. Though the Bramblebee was very good too – honeycomb cookies provided the vehicle for blackberry and violet ice cream. Visit Melticecreams.com

Sunday at Smorgasburg was the perfect way to experience all the food trends of the last few years without committing to a full meal. There were ramen burgers, cronuts, poutine. We did double-duck and had a bao bun, the steamed Chinese bun, filled with confit duck, scallions and cucumber, followed by Montreal Poutine (chips fried in duck fat topped with cheese curds and gravy). We then lay sprawled for some time until the chest pains passed before proceeding on to the dessert course. I’d like to say we shared a mini cake by the Ring Ding Bar but that would be a lie. I ate that gorgeous rainbow cake all by myself then I preyed on my husband’s Baonanas pudding (cakey layers of wafer, creamy pudding and fresh bananas) when his pace lagged. Visit Smorgasburg.com 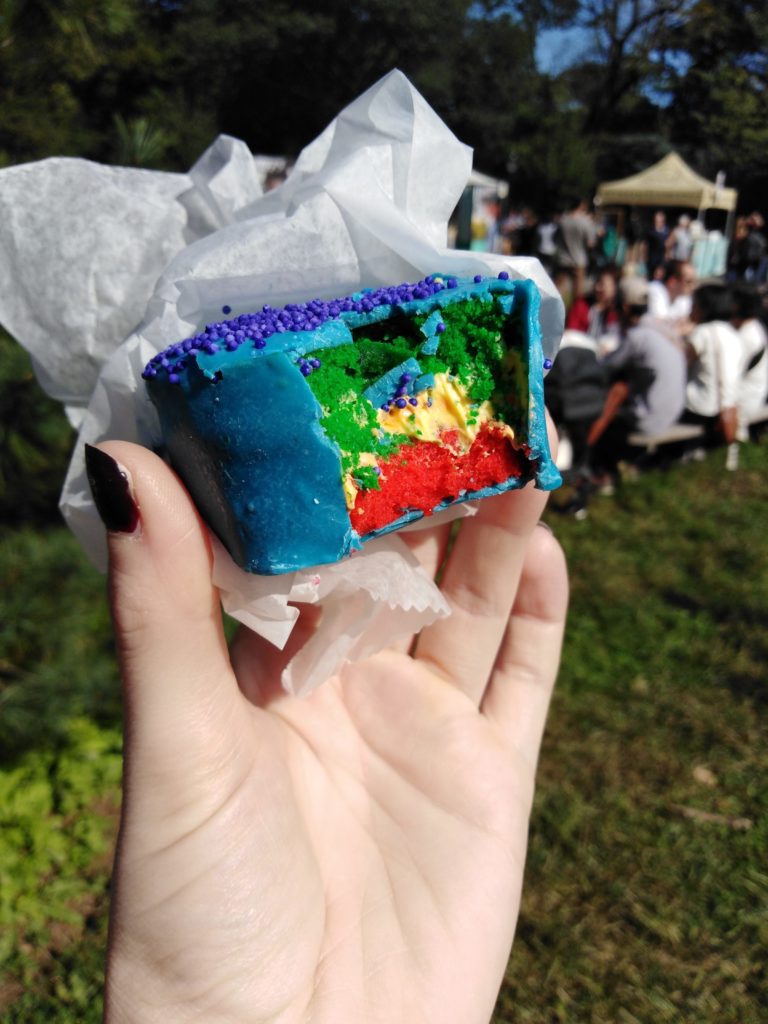 By the time, dinner came around on the third day of our trip, we were both slowing. We kept the ordering in this lively Mexican conservative, opting for one serving of cerviche (the freshest, zingyest I’ve ever had), one picadita with pork and one beef tostada. Okay, I know on paper that looks like a lot but believe me that’s small by our standards. Of course I did have an ice cream sandwich agenda in my back pocket – see below.

I’d caught the scent of a Cocoa Daddy on the wind and remembered vaguely that there was another vendor on Mulberry Street. Pretending I wanted a post-dinner stroll, I dragged my husband around for ten minutes in hot pursuit of the Cocoa Daddy and then when I spotted the Melt store, I tried to claim it was a happy coincidence. It was too late, he’d seen the crazed look in my eye and the salivating was pretty hard to ignore.

It had to be done. As our final act of consumption in NYC, we had to return to Xi’an Famous Food such is its tastiness. Also a women on Instagram had told me I had to try the cumin lamb noodles and it is not in my nature to leave a dinner uneaten. So we trooped back and ordered the cumin lamb noodles and beef soup. And while some might say it was a waste of a meal experiecne to double up like that, I stand by my decision. Those lamb noodles were epic.

A word on re-entry: After any large-scale eating expedition, it’s important to taper off the greed gradually so that any sudden abstemiousness doesn’t cause your body to go into shock. You’ve likely been operating on about 8000 calories a day for nearly a week, you do not simply cold turkey that sh*t. Happy eating folks.