Halloween or the ‘Purge’? Why Halloween night left me disappointed and ashamed

Our neighbourhood is a mess and our dogs are distressed. And for what? Here’s why I’m disappointed in my community’s behaviour on Halloween night

Last night was mayhem. I knew it would be.

Every year, on October 31, our neighbourhood becomes a scene from The Purge. What would normally be civilized behaviour, is now reckless and dangerous.

This year, the madness started earlier than usual. For the week leading up to Halloween, children in the area played with lighters and matches, setting fire to anything that would burn.

They pulled down trees in our local green space. They stole wheelie bins of rubbish. Everything that could be set fire to, was. Their parents, who could see the behaviour from their living room windows, did nothing.

After all, it’s ‘the week of Halloween’. They’re ‘only having fun’.

Surely I’m not the only one who feels embarrassed by this?

There is no excuse. Their behaviour over the last week will leave a stain on our neighbourhood for months. What was once our lovely green – about an acre of grassland surrounded by trees – is scorched. Blackened. Burned. 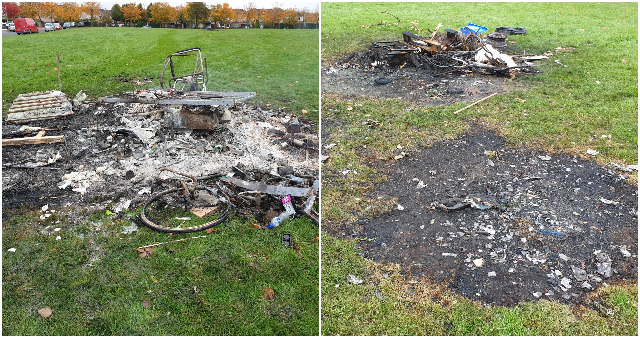 The green is also strewn with unburned rubbish, as the nearby public bin was set alight too. Where else would the sweet wrappers and beer cans go?

What’s more, the air feels dirty and poisonous. The bonfires (plural, because I’ve counted four of them in our neighbourhood alone), contained plastics, varnished woods and rubber. Aside from the fact it’s bad for the environment, it’s hazardous for our health too.

For the foreseeable, we will have to walk our dogs elsewhere. Young children will have to play on the road instead. And for what?

Aside from the bonfires, fireworks seemed far more intense in our area this Halloween. While I personally don’t mind the incessant banging, my dog became frantic. My family’s dogs were frightened. My friends’ pets were terrified.

As someone who follows a lot of dog shelters and rescue centres on social media, I could see an increase in the number of dogs going missing. One loud explosion of a firework is all it takes to make a dog scarper.

I can’t understand why people with fireworks don’t care. Again, it’s like all sense of good neighbourly behaviour disappears this time of year.

To add insult to injury, the remnants of the fireworks are littering the grass. Dozens of illegal sticks, abandoned by their owners for someone else to tidy up.

Van in driveway being extinguished tonight in West Dublin. Fires like these can easily spread to houses & nearby property #Dublin #fire #DFBLive #Halloween #halloween2019 pic.twitter.com/wsqAD9YeCp

As disappointed as I am in my immediate community, I’m bursting with pride for our emergency services.

Dublin Fire Brigade received almost 700 callouts over the 24 hours of Halloween, and they responded to 230 fire-related calls between 4 pm on Thursday and 6 am on Friday.

During that time, they had to deal with antisocial behaviour, including locals throwing rocks and fireworks at them.

At 6:30 pm, Dublin Fire Brigade tweeted, “Firefighters from Tara St at a bin store on fire in the city centre. Our crews encountered anti-social behaviour with rocks & fireworks.”

Speaking on RTÉ’s Morning Ireland, the Assistant Chief Fire Officer with Dublin Fire Brigade Greg O’Dwyer said, “there were areas where vehicles were driven onto bonfires.

“There were also barriers erected from bonfire material at the end of roads to stop our fire trucks from entering into the area, and those barriers were set alight, as well as cars at the entrance to those estates.”

The only saving grace is that all firefighters made it home uninjured. In a tweet, Dublin Fire Brigade said, “A Watch have finished their night duty after a busy Halloween. All our firefighter/paramedics got to go home safe to their families, no injuries reported.

“Next stop, Christmas,” they said.

If you are concerned about the burned remnants of Halloween bonfires, contact your local county council.

Read more: How the Irish celebrated Samhain long before Halloween

Read more: The story of a community’s spirit and a GAA club called St Senans