As I’m sure you’ve heard, tech billionaire Elon Musk and musician Grimes have revealed the name of their first-born: X Æ A-12. After the Internet positively imploded, Grimes took the time to graciously explain: 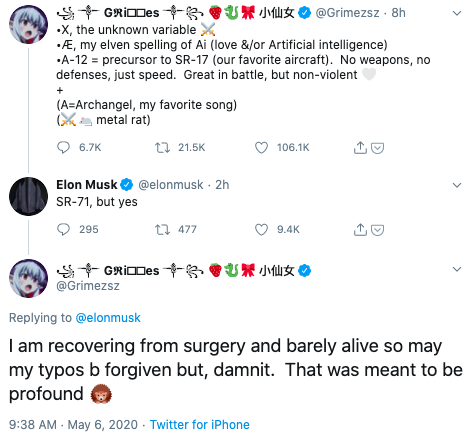 No, me either. Thanks for clearing that up for us, Grimes. What an absolutely wildly deranged interaction between the new parents.

How do you pronounce X Æ A-12? Well, Twitter has kindly explained:

me: how do u pronounce that?

“What will the child be called in school?” everyone cries. Look, this baby boy isn’t going to school. Little X Æ A-12 is going to be implanted with a transhumanist microchip like an episode of Black Mirror. He will be fed an intravenously administered liquid diet of vitamins, sleep in an isolation tank, play on a hoverboard and take holidays with his parents in Mars. Once his parents have figured out the ethics, he will be implanted with artificial intelligence devices and merged with technology to have superhuman strength, stamina, speed and sight and no longer need to sleep, eat, sweat or die, unchained to our pathetic human frailties.

Do you remember when Grimes shared her wellness routine? She said: “I first maintain a healthy cellular routine where I maximise the function of my mitochondria with supplements such as NAD+, acetyl L-carnitine, magnesium etc. From that point I spend two to four hours in my deprivation tank, this allows me to ‘astro-glide’ to other dimensions – past, present, and future.” After sword fighting, Grimes heads to the studio where she says her “mind and body are functioning at peak level, with a neuroplastic goal between 57.5 and 71.5 AphCs”.

I think a bit of school bullying is the least of this kid’s problems.

Are we being trolled here? Somehow, I don’t think so. The parents are named Elon and Grimes, so we’re already coming from a pretty atypical starting point. In 2017, 141 babies were named Tesla. We already have Blue Ivy, North West, Apple, Moses, Shiloh, Pax— X Æ A-12 is just Elon and Grimes’ esoteric entrance into the ethereal universe of unhinged celebrity baby names. Plus, what did you expect them to call their son? Dave? ‘Metal Rat’ is way less surprising.

Read more: Love Island is cancelled this year. I’ll be glad of the break from watching perfect bodies six nights a week