A few years ago, mysterious colorful sticky notes started to appear all around the city. Each one of them had a doodle of a serene face accompanied by phrases such as ‘Transcend,’ I am’, ‘Je suis,‘ ‘Om’ and ‘No One’. You may recognize these little postings if you’ve walked around the Village Quarter neighborhoods (Portobello, Ranelagh, Camden?Wexford?Harcourt street). Although this note sharing phenomenon between strangers has happened in other urban cities around the globe, it was new for us.

Curious Dubliner’s tweeted about the doodles asking who was responsible, and there was even a news article written about it, but the mystery remained unsolved… until now.
A couple of weeks ago, this journalist serendipitously happened upon the sticky note bandit whilst in the act. And to our surprise, the responsible party was not a college-aged hipster art-student as some Reddit users had speculated, but rather, a soft-spoken pensioner in her 70s who wishes for her identity to remain anonymous — an Irish Bansky if you will.

Upon approach, she was willing to answer many questions about what led her to start pasting the city with her curious messages. A former junior clerk for the department of public works, she flitted from topic to topic, including her concern over the “awful” state of the roads on some Dublin city streets. She was full of stories. I tried to piece together a portrait of a woman who at the age of 25, moved to Paris and spent six months working as an au pair whilst trying to learn French; a woman who said she discovered she was a poet after the birth of her first son; a woman who could go from talking about world politics and conspiracy theories in one breath, to the importance of helping others in another.

Where it all began

It all started three years ago. She was having a meal in Govindas on Abbey Street one afternoon. As the sun poured into the window, she looked up and saw faces emerging from it — many different types of faces. It was right there that she took out some paper and started to doodle what she saw. Shortly after that incident, she began to leave her sticky notes around the city; in Ballsbridge, Stillorgan, Dun Laoghaire, Malahide, Glasnevin, and many other “spontaneous areas”. 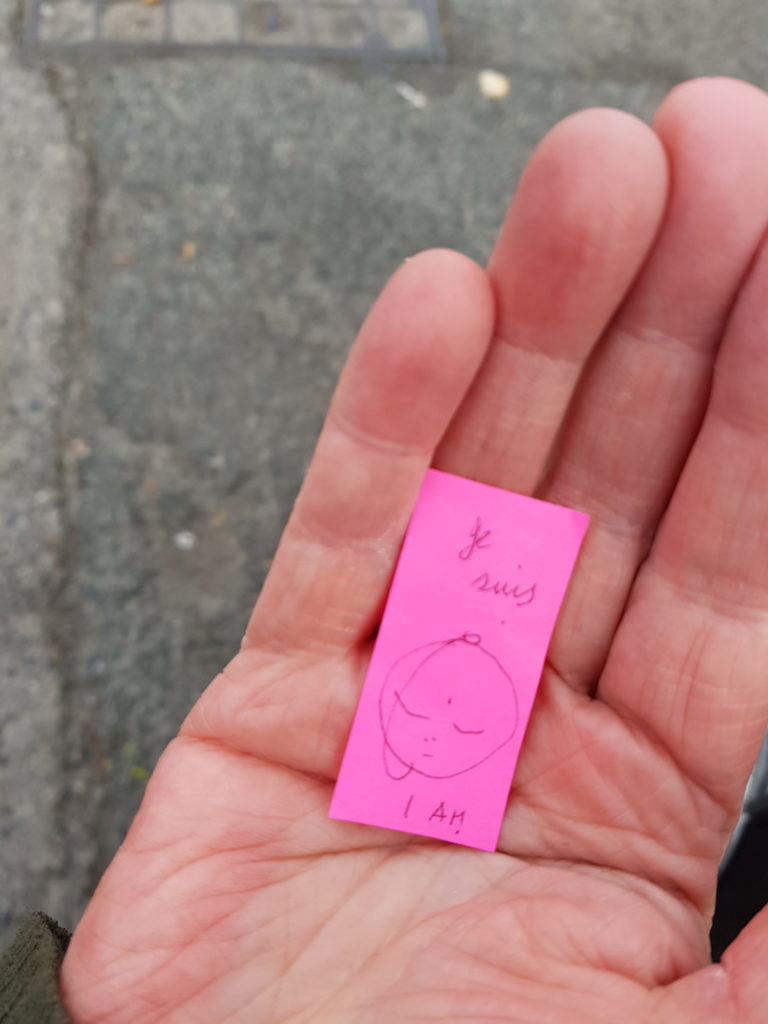 So what does it all mean?

“I want to draw attention to the spiritual eye,” she says. She explained that the phrases ‘Je suis,’ and ‘I am,’ refer to the biblical phrase ‘Be still and know that I am God’ (Psalm 46:10).; and the phrase ‘Om’ was inspired by her uncle’s involvement in the Maynooth Missions to China. She talks about the first poem she wrote, titled Daffodillys, reciting parts of it she discusses how writing keeps her mind active.

“A lot of people in my age group are unwell if they don’t make an effort to help humanity and draw attention to the divinity.”

The more she speaks, the more it becomes apparent that the real mystery lies within each of us and how we choose to express ourselves in the world. Her poetry and city notes are a means for her to bring understanding to her own life.

“Writing can bring clarity to the writer but not necessarily clarity for others.”

The importance is not so much why we express ourselves, but that we have the courage to share what lies within, and it is this innate need to communicate that binds us together.