Forget Multitasking, Be A Micromaster: Is Doing One Thing Well The Key To Happiness?

Multitasking is now accepted as pretty much the least effective way to achieve, yet some of us just can’t quit it. A new book argues in favour of Micromastery – a radical new approach to learning and success.

Author Robert Twigger argues in his new book, Micromastery?that the practice of learning skills in isolation – he uses making the perfect omelette?rather than attempting to ‘learn to cook’ as an example – is closer to the mode of learning that children use. It is a simplified version of setting reasonable goals and breaking the unattainable down into bite-sized pieces?of learning. Twigger tells us that doing this mirco-learning will help us to enter a state of flow – the idea of ‘flow’ was introduced by psychologist Mihaly Csikszentmihalyi as a state in which our energy is so focused on a single task at hand that even the passage of time goes unnoticed. I feel like flow is a feeling that I recognise?with nostalgia because?it is a state so rarely achieved in modern life. I observe it constantly in my toddler son however and I feel genuinely envious of his pure commitment?to arranging his cars or transporting piles of muck from one location to another.

“A micromastery, because it is repeatable without being repetitious, has all the elements that allow us to enter a flow state, which produces great contentment and enhances physical and mental health,” writes Twigger. 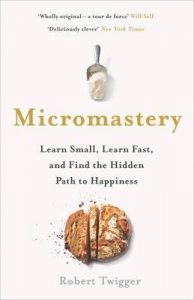 Micromastery is coming at a time when people are seeking shelter from the?accelerated age we are living in. Old school pursuits like?colouring,?cross-stitch, and decoupage are experiencing a renaissance as we struggle to simply slow down. We are now a race that needs to take holidays from our digital devices and make?concerted efforts to simply stop doing all the time.

“A micromastery is a self-contained unit of doing, complete in itself, but connected to a greater field,” explains Twigger.

Twigger calls this the ‘entry trick’ and highlights the pleasure reward we get basically from nailing something however small it may be. I had a long-held ambition to learn the guitar, but a lack of time coupled with laziness conspired against me, so instead I learned just one song Green Day’s Time Of Your Life (no shame) really well and trotted it out at parties. It was a completely superficial exercise but Twigger’s right, I did get a nice little buzz of achievement?from the minor success. And while learning to play the guitar is an ambitious and daunting goal, learning to play one song well was completed in a week and was a neat little payoff that while perhaps not impressive was still enjoyable.

Focusing on the ‘entry trick’ needn’t be a superficial cop out either as it does make the wider learning seem more accessible. “These are perceived as hard things to learn that signify a greater mastery of the field concerned. But with micromastery you start with the test piece and then – and only then – do you go back upstream to explore more.”

Many of us focus too much on what can’t be achieved but Twigger’s outlook is delightfully optimistic:

“Seeing the world in terms of micromasteries makes anything seem possible. Fancy bookbinding? Yoga? Tap dancing or tank driving? All have their micromasteries. It’s very liberating – you no longer have to feel trapped in your day job. You will start, in a small way, to get your life back from the idea that the world seems to push on us that we should do just one thing all our lives.”

It’s a happiness hack that’s well worth a go.