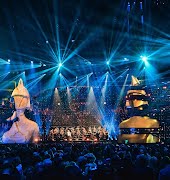 The Brit Awards will welcome a 4,000-strong live audience for the ceremony next month

As First Dates finally arrives to Irish TV, GILLIAN BRETT takes a look at how dating in the 21st century is a whole new game.

It sort of fell into my lap, and I was just at a place in my life where I was having fun and trying to live to the fullest …? Conor Doyle is telling me about the time, nearly six years ago, when he appeared on the dating show Take Me Out on TV3. The 30-year- old from Waterford is now reminiscing, as he has just married his long-term girlfriend Lauren Enright, the stunning Dubliner who he met after saying ?Sure, why not?? when he was asked to take part in the show in 2010.

Make-up artist Lauren, 27, also had no expectations of finding true love when she joined 29 other single girls on the match-making programme. ?I was actually booked to work on a photo shoot that clashed with the filming, and was intending to leave the show early,? explains the new bride. Luckily for Lauren, in what would have been her last round, Conor strode on set and convinced her to keep her light on with his witty VT and cheeky smile. After a drink in Shifters, the rest was history, and the pair have been living happily ever after in Vancouver for the past four years.

It all feels very fated, like a modern love story. But is the same ever said of the one in four Irish couples (according to a recent study) who manage to find each other online? Or is online dating still somewhat stigmatised and considered ?lowbrow?? ?We were talking about online dating the other day and how it has become the norm,? says Lauren. ?The probability of me meeting Conor would be the same nowadays; it’s just that in our case,it was televised.?

Speaking from personal experience, there are quite a few dates in my back catalogue that I’m very relieved were not for public viewing. Dating in the digital age is perceived as something of a minefield, and as such, my own investment in it was tenuous. Free apps that filled the time it would take for the bus to arrive was about as deep as I got into an industry that now offers hope for the most niche relationship preferences imaginable (have you heard of Sizzl? Bacon lovers rejoice – your BLT-loving soulmate awaits). The side effect being that I brought this ambivalence into all of my online interactions.

Perhaps I was overly influenced by the media’s misjudgement of it all: in a 2015 article in Vanity Fair, Nancy Jo Sales argued that Tinder is responsible for a ‘dating apocalypse?, with several twentysomething New York men admitting they use it to prowl for women to sleep with. They call their conquests ?Tinderellas? and pride themselves on getting women into bed after a few texts.

Yet, on the rare occasions that I did find myself on a date – be it via Tinder, Happn or the feminism-friendly Bumble – it was generally fun, took me somewhere new, and allowed me to meet someone outside of my immediate circle of friends who had a fresh viewpoint on life in London. And to my complete surprise, I soon stumbled upon ?the one?. My hardened approach to modern dating was contradicted when I realised there was a large possibility that the person on the other end of the phone was genuine about finding a serious loving relationship, a modern-day fairytale, and maybe even the one for him – not just a one night stand with a Tinderella.

This month, a new dating programme will air on RTE? 2 – First Dates. You may be familiar with the British version, which began on Channel 4 three years ago. Filmed at the upmarket Paternoster Chop House restaurant in Central London, the show makes for addictive, voyeuristic viewing as singletons of all ages and backgrounds embark on a blind date. The Irish version follows the same blueprint: matches are made by the show’s producers, who assure me: ?We get to know all the applicants very well throughout the process.

Casting is central to the success of the show, and the fact that it genuinely tries to help people find love.? Those who made it through from the 4,500-plus applicants will be relieved to hear that.

The overall message to be gleaned from the digital, or indeed TV, dating scene appears to be: have an open mind and expect the unexpected. If both of these really aren’t your thing, what’s the alternative – Coppers? We’ll let you know when season two starts taking applications.

Everyone’s favourite carpenter says he’s back for the ‘Sex and the City’ reboot, but SJP’s not sure