Festive nostalgia: Soon you can watch all your favourite Christmas films on the big screen

It’s that time of year! For the entire month of December, Light House Dublin and Pálás Galway will be spreading festive cheer, taking you right back to your nostalgic childhood years by showing all your favourite Christmas films on the big screen

Would it even be Christmas if you didn’t have Die Hard playing in the background (RIP Alan Rickman) or weep alongside Emma Thompson (and Joni Mitchell) in Love Actually? Who remembers the first time they watched The Muppet Christmas Carol? (Still Micheal Cane’s finest hour) or the time you laughed so much at the antics of ELF you momentarily forgot to breathe?

These films are rooted in our memories; we watched them as children, we watch them with our own and though they add to the merriment of this time of year, watching them on the big screen as if for the very first time evokes the same feelings from years ago – the true magic of their allure.

What movies will be shown?

Some of the highlights include:

Buddy The Elf back on the big screen daily from 4th December with a very special re-release of ELF, while Warner Brothers are releasing a very special 4k restoration of Joe Dante’s Gremlins from December 6th.

From 29th November, there will be limited screenings of a brand new 20th-anniversary restoration of Stanley Kubrick’s Eyes Wide Shut with a specially commissioned short documentary Never Just A Job.

And as has become an annual tradition, on December 7th there will be a massive Home Alone party (with a double bill of the first two movies during the month) with loads of mischievous fun and games throughout the building – Christmas attire and costumes are, as usual, encouraged. 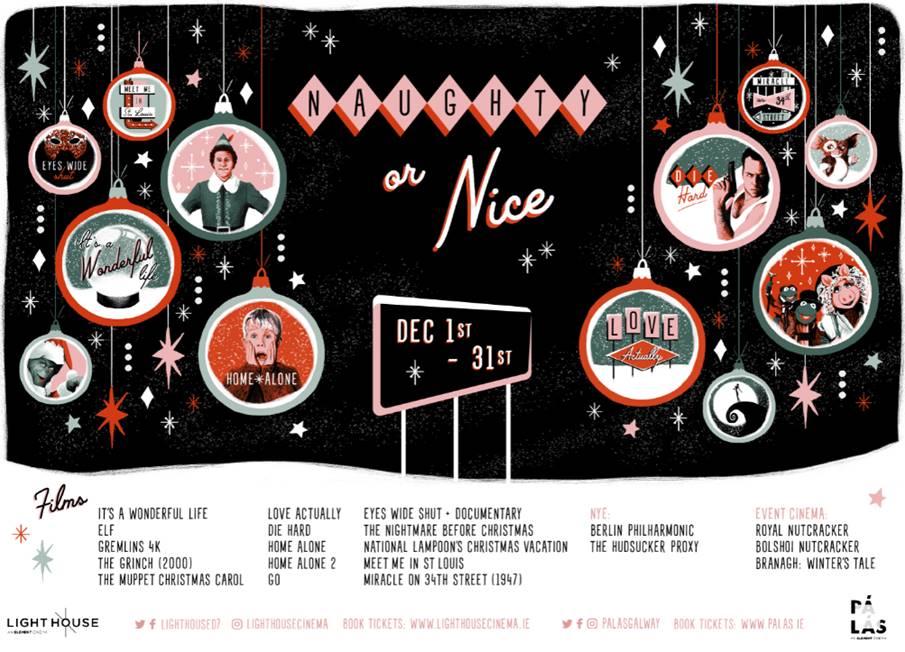 There will also be screenings of classic films such as Frank Capra’s It’s A Wonderful Life, Miracle On 34th Street and for the first time, you can experience the dazzling Judy Garland in Vincent Minelli’s gorgeous Meet Me In St Louis.

To celebrate its 25th anniversary there will be a chance to debate whether it’s truly a Christmas or Halloween film (both?) with special screenings of The Nightmare Before Christmas with singalong screenings included in the line-up for the month.

This is all alongside an array of festive goings-on, such as a very special The Room Christmas Party in Light House and there will be a Christmas Supper Club in Merrow Restaurant at Pálás, along with lots of other festive treats.