Ellen ‘Nelly’ Ternan was the Other Woman all her life. Born in 1839 she grew up in a theatre family and tried her hand at being an actress but was by all accounts talentless in that regard. She met the famous author Charles Dickens when she was in her late teens and became his secret mistress for thirteen years. There was a 27 year age difference between the couple and the relationship led to Dickens leaving his wife and the mother of his children.

After Dickens? death she received a tidy sum from his estate and married a young man she met while he was still an Oxford undergraduate. This partnership was also home to an age gap, of 12 years, but Nelly decided to not mention the fact she was 37 and passed herself off as a 23 year old. I guess if you can get away with it? She went on to have two children with the youthful George Wharton Robinson and died in 1914 of cancer. 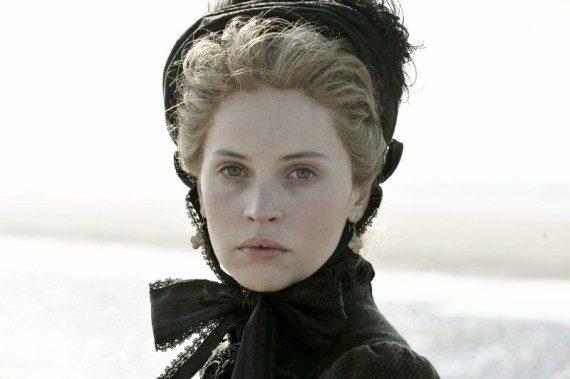 The scandalous life of Nelly Ternan was recounted in Claire Tomalin’s cracker of a biography The Invisible Woman and is now finally a movie. Directed by Ralph Fiennes, who plays Dickens, The Invisible Woman herself is played by Felicity Jones, an actress who is about to escape from under the radar and do Very Big Things.

Raised in in a village outside Birmingham, Jones? early filmography is a smattering of UK comedy dramas such as Cemetery Junction and Chalet Girl. She garnered notice in the romantic drama Like Crazy, winning a Jury Prize at Sundance for her performance.

Besides possessing the best fringe in the business and being the girl Fiennes had to have in his movie, Felicity has already proven herself a dab hand at high fashion. Her birdlike qualities brought a demure strength to Dolce & Gabbana’s make-up campaign last year. Her red carpet wardrobe has also been a smattering of minimalist elegance with her tending towards monochrome Dior, neat Burberry ensembles and sharp Viktor & Rolf jumpsuits.

Next up Miss Jones will be gracing multiplexes the world over in superhero franchise The Amazing Spiderman 2. In the meantime keep February 7th free for the UK and Irish release of The Invisible Woman.