Is Extinction Rebellion highlighting or distracting from the climate campaign?

Anything that brings climate change into mainstream conversation is to be encouraged, right? Not necessarily, writes Amanda Cassidy

Thousands have marched in cities around the world to protest against the perceived lack of action on climate change. But there has been criticism over the way in which these activists are going about highlighting the cause.

This week protestors in Dublin set up a makeshift camp and took part in a walk involving costumes, signs and a huge pink boat.

Some chained themselves to the Dail, traffic was held up, and TD Alan Farrell tweeted that he was trapped inside Leinster House last night in an incident that saw a number of protestors arrested. “Protesters who chained themselves to the Leinster House Merrion Gate at 6pm are still there having refused to unlock themselves. 60-70 Gardaí, a dozen Garda vehicles, an ambulance, a fire engine, the public order unit & probably more out of sight”.

Today, some of those involved in the protest were criticised for bringing along a huge generator for power. Others were called out for discarding  plastic bottles and disposable coffee cups.

“The path to change is never straightforward. And those who choose to lead the way always risk criticism as part of that battle.”

In London today, the environmental group has also set up outside the entrance to the BBC building where staff are also reporting that they can’t get in or leave the building. Campaigners are calling on the broadcaster to “tell the full truth” in its coverage.

But the path to change is never straightforward. And those who choose to lead the way always risk criticism as part of that battle. But is the contentious disruption inevitable and necessary in order to bring change? Or do Extinction Rebellion risk derailing the recent wave of goodwill and motivation coming from the mainstream when it comes to protecting the environment?

“Should it matter how you look when you are trying to save the world? Maybe…”

Boris Johnston’s dad wasn’t mincing his words when he described himself as proud to be “an uncooperative crusty” at a London Extinction Rebellion march recently. He reminded protestors that “your force comes from the fact that you are wedded to peaceful protest and you are not going to break the law.”

Eco-warriors have tended to be the butt of jokes until more recently when they began getting mainstream support as people woke up to the problems besieging our planet. The Oxford English Dictionary included the word “crusty” back in 1997 as “a group of homeless or vagrant young people, generally living by begging in cities, and characterised by rough clothes, matted, often dreadlocked hair, and an unkempt appearance. Also the name given to the sub-culture as a whole.”

Should it matter how you look when you are trying to save the world? Honestly…Maybe.

Maybe the negative associations of being a “tree-hugger” is harming what is a hugely important and essential fight. 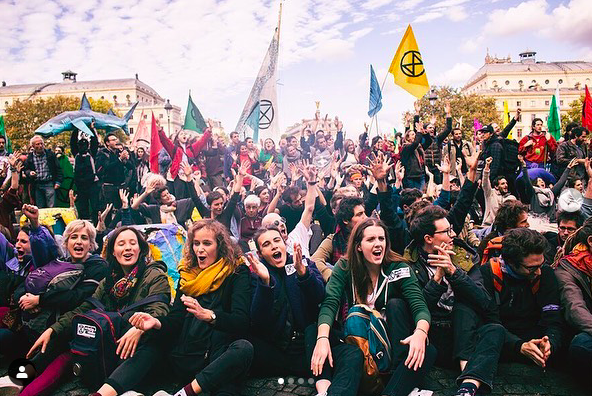 The new wave of eco-warriors call themselves Extinction Rebellion (abbreviated as XR) and describe themselves as an environmental pressure group who will use civil disobedience to compel government action on climate breakdown and ecological collapse.

But is breaking into an airport and lying on top of a plane the right way to go about this? A YouGov poll released recently found that people are seemingly tired of their city being “shut down” by campaigners. Over half of the public polled said they oppose Extinction Rebellion’s disruptive aim. Only around a third were in support.

“Informing is one thing, scaremongering is another”.

We know now that climate change is an urgent problem. Governments need to do more, all of us do, immediately. But along with dedicating days to the cause, diverting policing resources and gluing yourself to various places, it is essential for the credibility of any campaign that the facts are straight and that you can stand over the rhetoric compelling you to take this action.

Informing is one thing, scaremongering is another.

Zion explained to the veteran broadcaster than “billions of people would die in a relatively short time period due to global climate change” and that children would die in the next 10-20 years.

Quizzed on where the numbers had come from by Neils,  she said: “We don’t know exact numbers and it’s a little bit concerning to focus just how many deaths – there will be deaths and mass suffering…”

“Does meaningful change have to be so heavy-handed?”

You’re scaring people with this rhetoric”, Neils told his interviewee, to which she replied: “I think there’s a danger of scaring people simply because we’re not taking it seriously enough and people are feeling really desperate that we’re heard on this and unfortunately alarmist language works which is why we’re discussing it right now.”

Neisl accused her organisation of spouting “apocalyptic predictions” and questioned how much scientific backing they have. Lights responded; “We’re not trying to use alarmist language, we’re listening to what scientists are saying and using language that is appropriate to the situation.”

But does the hysteria risk distracting from actual progress when it comes to the environment? Does meaningful change have to be so heavy-handed?

As long as this action is productive, it will work. People power has always been a key part of driving global change and this should be no different. The well-meaning intentions are there, but perhaps its now time to tighten up Extinction Rebellion’s strategy.