Escape To A Secret Boutique Hotel In Berlin

Standing outside the Henri Hotel, off the swish shopping boulevard Kurfürstendamm, you’d be forgiven for thinking that Sally Bowles might run out to greet you with a prairie oyster. But while its bulb-lamp sign is distinctly Cabaret-esque, Henri’s high-ceilinged interiors are thoroughly Art Nouveau; even its front of house staff wear uniforms that hark back to the fin de siècle, making for a cinematic effect. 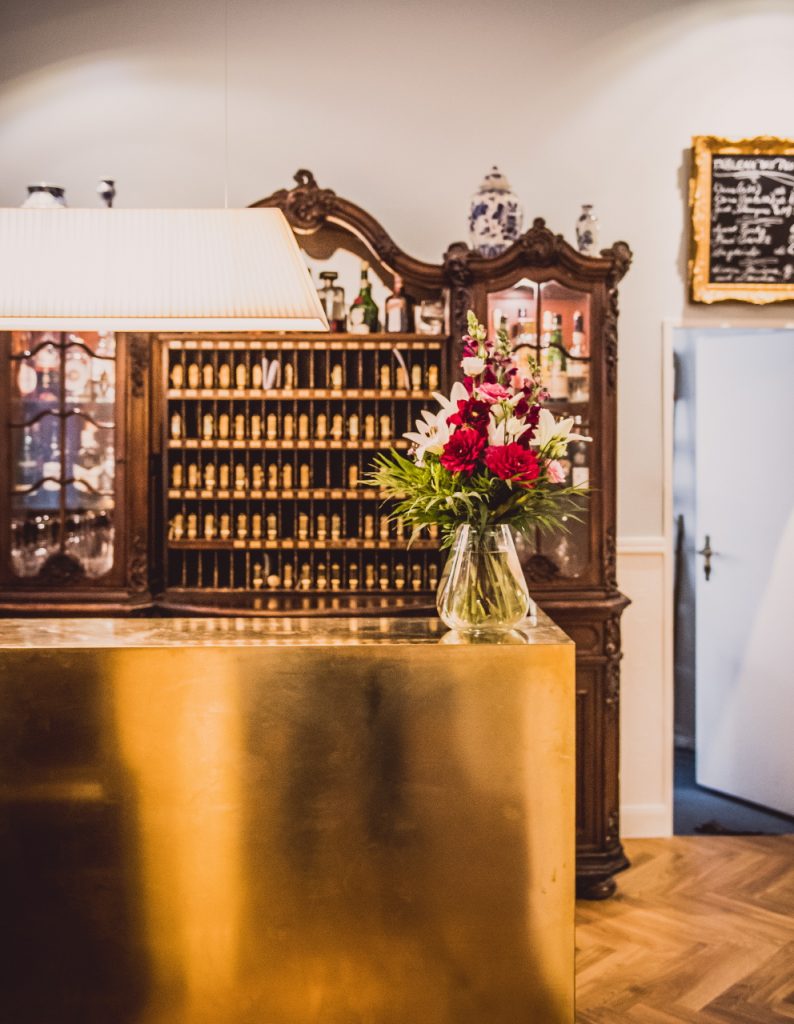 It wasn’t always thus. Before starting life as the Henri Hotel in 2016, it was the Hotel Residenz and before that, an apartment building. The restored ground-floor salons lend a genteel, residential air, not least at breakfast, when the hot and cold buffet is presented in a quaint “kitchen”, and also at abendbrot – the German tradition of breaking bread with cheeses, meats and dips, and here served free for guests from 7pm to 9pm each evening. There’s an honesty bar beside the reception desk, as well as in-room fridges, tea and coffee-making facilities.

From here, squeeze into the tiny, utilitarian lift and enter giant double doors to each Tardis-like floor where rooms cost from €108. Our spacious “Salon” is beautifully outfitted with a four-poster bed, antique furniture and vintage-style finds, the only nod to its former Hotel Residenz past being a small bathroom, where a tiled border has been painted over and a plastic flush button at the loo mismatches the elegant, era-appropriate sink and bathtub fixtures. The balcony, stretching across the length of one wall, is the cherry on top of our rather gorgeous boudoir.

There are also Hotel Bogota Suites, inspired by the former nearby apartment block turned eponymous Berlin hotspot where once Helmut Newton was trained by the photographer Yva in the 1930s, before the Third Reich Chamber of Culture set up camp. Some of the Hotel Bogota’s zimmer could cost as little as €40 per night, even in the noughties. But gentrification – Bvlgari, Cartier and swanky car showrooms moving into the area – sealed its fate when it closed in 2013.

These ubiquitous luxury brands that brush shoulders with the equally familiar H&M, Forever 21, Superdry, etc, speak volumes about the neighbourhood today, which was historically an affluent, central district in the West until a reunified Berlin made Mitte its commercial nucleus. There are also more furniture showrooms here than you can shake a stein at, but we bypassed those for Benedict, a Greenwich Village-style all-day-breakfast restaurant on Uhlandstrasse. Teeming with bright, young, handsome things – staff and clientele – and foliage-print wallpaper, its long bar is ripe for propping. We tuck into exceptionally good shakshuka (me) and Eisbein-Stulle (him; pulled pork with piquant sauerkraut on rye bread with mustard and poached eggs), each washed down with moreish mimosas.

Also on Uhlandstrasse, we sniff out the excellent Spice India, for great value and credible Indian cuisine served by some of the friendliest staff you’ll find anywhere. The two complimentary shots of plum wine at the end of dinner send us back to the hotel with a spring in our step – and vowing to stay at the new Henri Hotel opening in Düsseldorf this year, whose 1960s aesthetic sounds more Mad Men than Cabaret, ?old chum.

This review features in the all-new February/March 2018 issue of Cara magazine, which is on all Aer Lingus planes from February 1.