Emma Watson is a young woman on top of the world. Not only has she inspired girls around the world to embrace their inner brainboxes as JK Rowling’s Harry Potter character Hermoine Granger, but she’s also balancing a career in Hollywood with that of a UN Women Goodwill Ambassador.

So it comes as a bit of a surprise to hear the Brown University graduate and star of the upcoming Beauty and the Beast movie speak about how she sometimes feels like an ?imposter?. In an interview with UK Vogue, of which she covers the September issue, the actress reflects on her day job. When asked did acting come naturally to her – she was 11-years-old when she starred in the first Harry Potter movie – she said: ?It’s something I’ve really wrestled with. I’ve gone back and I’ve quizzed my parents. When I was younger, I just did it. I just acted. It was just there… It was just something I did.?

For years Watson was comfortable with acting, after all she was the female lead in one of the most successful franchises of all time. But as she got older she became more critical of her acting, she admitted, and described herself as an imposter. ?Now when I receive recognition for my acting, I feel incredibly uncomfortable,? she said. ?I tend to turn in on myself. I feel like an imposter.? 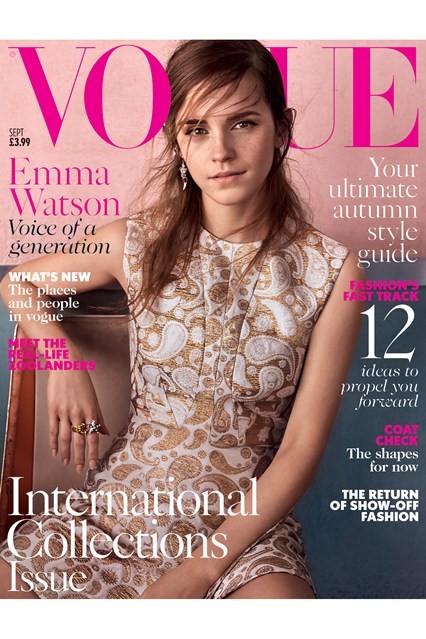 We’ve written before about Imposter Syndrome. In brief, it’s the feeling that tends to crowd successful women that they don’t deserve to be in the vaulted position their hard work and talent got them. Women like Meryl Streep, Tina Fey, and Kate Winslet have spoken about how self-doubt has plagued them. While it’s sad that Emma Watson feels this way, it’s also refreshing she’s talking about it in an era where young starlets are determined to be seen enjoying life via the medium of written-about Instagram accounts.

However, while Emma struggles with overcoming her Imposter Syndrome, she has plenty of personal achievements to reflect on. In the past year, she’s become the voice of feminism after she made a speech last September at the UN headquarters in New York. She was launching the HeForShe campaign, which encourages men to support gender equality, and spoke about what feminism means to her. It was a stirring personal story and launched a political tsunami. The campaign trended on Twitter and amassed support among some of Hollywood’s most influential actors.

The entire process changed the actress, even though she was very nervous before taking the plinth. “I was in my hotel room, thinking, I can’t do this. I was just terrified,? she said. ?And then I Skyped a friend who said, ‘Go through it again and ask yourself, if you were hit by a bus tomorrow, would you be comfortable with every single line?'”

Cue a final edit and one viral speech later everything fell into place for the activist Vogue have called the ?Voice of a Generation.’ ?Everything clicked into place, in a way that it hadn’t before,? she said of her new role. ?I understood what I’m here to do and knew where to channel all this energy that has been coming at me. I now feel this sense of peace. People say that I’m different since I did it.?