“We will never achieve gender equality unless everyone – girls, boys, women, men – are involved.” That, in a nutshell, was Emma Watson’s message in Davos, where she came to launch UN Women’s new #HeforShe website at the weekend.

The Harry Potter actress was?appointed a goodwill ambassador for UN Women, and so far she has excelled in her role. She is the face behind the powerful #HeForShe campaign – a gender equality initiative aimed at encouraging men to play their part in’supporting women’s rights around the globe.

Over the last two days, at this year’s UN World Economic Forum at Davos, Watson kept her pulse on the IMPACT 10X10X10 initiative (the current?phase in her #HeForShe project), and?interviewed 10 male CEOs who have committed to gender equality in their organisations to see how they are going about doing this. You can watch the full thing below. 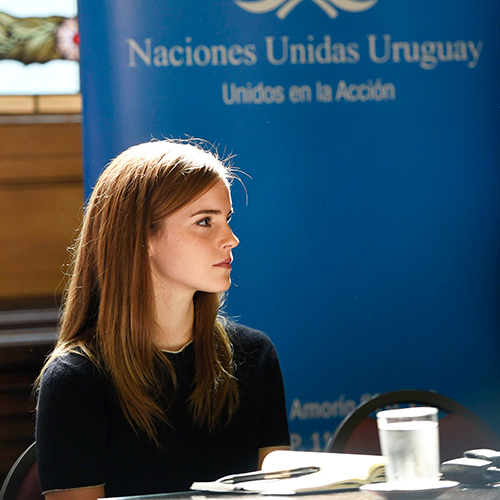 She also said?that full female participation in the workforce could boost GDP by $28 trillion within a decade, the “single biggest stimulus to the economy.” The?IMPACT 10X10X10 aims to end inequalities faced by women and girls around the world, ensuring that?governments, businesses and universities are’making concrete commitments to gender equality”, according to Watson.

In the last year alone it has managed to secure the assurance of top global brands, including Barclays, Vodafone and Unilever that they will address the issue in their corporations, according to Vogue. ?When it launched last year, she said that she wanted?to hear from “the human beings that are behind these organisations.”

“Girls, who have been your mentors? Parents, did you make sure you treated your children equally – if so, how have you done it? Husbands, have you been supporting your female partner privately so that she can fulfil her dreams too? Young men, have you spoken up in a conversation when a woman was casually degraded or dismissed? We want to know. We Want To hear from you.”

Watson’s dedication to promoting the feminist message has?been nothing short of admirable. As well?as encouraging millions of men (as well as women) to embrace this campaign – over the last 18 months alone it has sparked more than 1.2 billion conversations across various websites – she has also launched a feminist book club and continues to be a powerful advocate for women and equality in all aspects of life, not just the entertainment industry.

It’s hard to believe such a woman could suffer from imposter syndrome. She really is quite remarkable.