Editor’s Welcome – This is April

Every month is a busy one at IMAGE HQ, but throw in Fashion Month – the whirlwind that is the international catwalk presentations – and it can be difficult to remember what time zone you’re in, let alone what day it is. With social media, you might wonder why editors continue to put their bodies through such gruelling schedules (not to mention the temporary but significant shelving of personal lives), to sit front row at a show that can be viewed live on a screen anywhere in the world. The answer lies in the fact that the clothes presented are really only half the story. The other half is garnered from the overriding mood, nuances and minute details – all things Instagram (as much as we love it) can’t capture, regardless of how many filters they give us.
Take Gareth Pugh’s AW18 presentation, for example. I’ve long admired the designer’s vision, but had shamefully underrated his execution until I sat front row at LFW and witnessed the lights going up on Jacquetta Wheeler’s masterful silhouette. Part of Pugh’s inspiration this season was demolition, and out of the rubble of his AW18 garments, a clear and conscious effort to empower the women who wear his designs arose. (Even Graham Norton, sitting opposite me, looked mesmerised). Had I watched this show online or swiped through the images on social media, I would have dismissed it as too far from my personal reality to fully appreciate. But sitting there as the models emerged from the cavernous Ambika P3 exhibition space, the clothes on display represented solidarity and a form of beautiful protest. I felt the strength and force of the women walking in front of me and could envision how the looks might be reinterpreted up and down the high street for seasons to come. Politics, ideology and identity were so dramatically narrated throughout. I don’t mind admitting to you, dear reader, I was borderline emotional. Thankfully, the lights were kept dim on the audience, so I think I got away with it. As for Norton? I suspect he just had something in his eye. 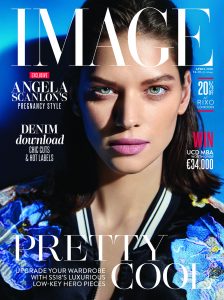 The April issue of IMAGE Magazine is on sale nationwide from March 22.