The new Dove Deodorant is incredible. Not only does it keep you dry and smelling fresh,’did you know it can increase your IQ by forty points? Or help you locate a missing two-year sock? Heck, it even knows a guy who can get you on the guest list this weekend. Okay, so it really only does the first thing, but their latest (genius) ad campaign is cheekily taking on Donald Trump with its own variation of “alternative facts”, and it makes for brilliant reading.

Dove is the latest to hit Trump right where it hurts – by making fun of him – with a large campaign entirely devoted to “alternative facts” – otherwise known as direct lies. Everyone knows Trump hates when anyone makes a parody of him (eh, his entire presidential campaign was the?basis for this?). Remember all the SNL sketches? If you can cause him to go into a Twitter rant for slagging him off, you’ve won a small battle.

And in this case, the Trump Administration has no one to blame but themselves; the whole notion of lying?via “alternative facts” came directly from them – ??Kellyanne Conway used the phrase to describe the White House press secretary Sean Spicer’s exaggerated proclamations about the public attendance of Trump’s inauguration, and the internet had a field day. 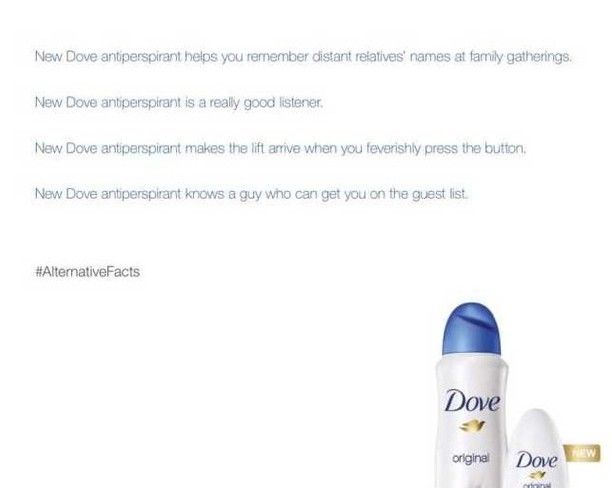 So using the deodorant won’t change the world, but it will give you a laugh this morning and probably annoy Trump, and that is an excellent way to start the day.