Every year, on June 16th, Sandycove is filled with men and women in hats and Edwardian garb walking proudly on the streets of the village, greeting each other with knowing smiles and nodding at bemused tourists. Some may be even found reciting literature at street corners or on the strand promenade. These people are celebrating Bloomsday and the right thing to do is join them.

Bloomsday is 110 years old this year and it promises to be yet another lavish celebration of Ireland’s most famous fictional hero, Leopold Bloom, the central character in one the most important novels of the 20th century, Ulysses. Starting from June 10th, a week-long odyssey of events from the North to the South of Dublin will delight Joyce fans. And hey, don’t feel guilty if you haven’t read the book, you can still partake in the fun. 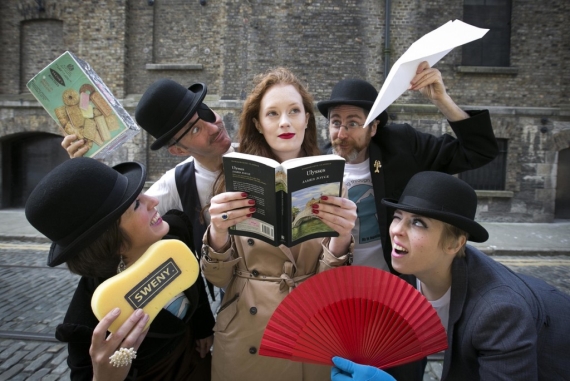 A couple of our favourite events this year involve food. Gastronomic indulgence featured greatly in Joyce’s books, it is why we’re excited about the Bloomsday Breakfast at the James Joyce Centre and, later on in the day, the Bizarre Bloomsday Brunch on and all over North Great George’s Street, in conjunction with the Street Feast Festival. Look for a foodie celebration in your local area here.

One of the best ways to celebrate the day and take in some of Dublin’s best sights is to walk the Ulysses trail. Every year, hard-core Joyceans make the journey from Bloom’s home in Eccles Street to the James Joyce Martello Tower in Sandycove, stopping in Davy Byrne’s pub for the gorgonzola sandwich and glass of wine described in the book. If you are interested in joining the pilgrimage, there are walking tours departing from various points in the city, some passing pubs, some not. The more artistically inclined can choose from period and modern performances of Ulysses, The Dead and The Dubliners, but you must book your tickets super spottum.

Finally, for a fun and alternative take on Bloomsday, join the musical procession, on the same North Great George’s Street, organised by the popular US-based The Here Comes Everybody Players. And to end a week of celebrations in style, party like it’s 1904 at the Bloomsday Rocky Horror Show and Wrap Party in the Sugar Club.