Ryan Reynolds, Ben Affleck, George Clooney – these are just some of the drop dead handsome names who all share one thing in common, besides various properties. They can all boast to have held the title of Sexiest Man Alive, the prize PEOPLE magazine bestow every year on a typically white celebrity. And this year David Beckham joins their ranks.

The former footballer and husband to designer superstar Victoria was declared the?Sexiest Man Alive in recent hours. Despite his status as a longtime veritable?ride, we’ll even forgive the dad-of-four those platinum highlights, this marks the first time Beckham has topped the list. Last year Chris Hemsworth was numero uno with Adam Levine notching up 2013’s honour. 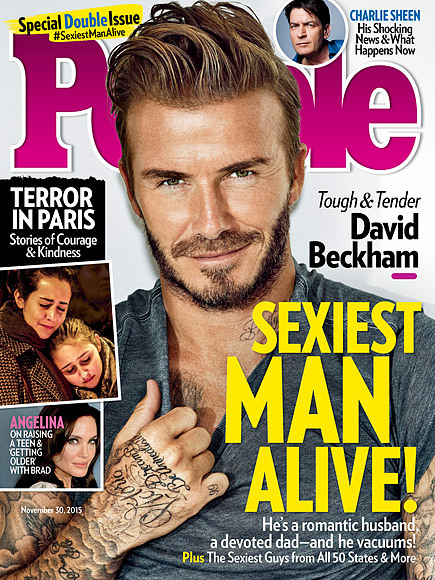 
This illustrious anointment will no doubt help David as he attempts to establish a film career in the coming years. Since his retirement from soccer, David has collaborated on fashion lines with H&M and Belstaff. However, it is his acting ambitions that people are watching closely. Guy Ritchie has cast his friend in a small role in the upcoming King Arthur movie with Charlie Hunnam and Jude Law and Beckham himself has talked about his Hollywood hopes.

We’re sure a little title like Sexiest Man Alive will help open some more doors.