Daniel Craig Moaning About Bond Is Not Doing Him Any Favours

After comparing taking on another Bond movie to slashing his wrists, Daniel Craig is coming under fire from industry insiders and fellow actors.

Sometimes actors aren’t the magnanimous people the Graham Norton Show would have you believe. For example, there was Jamie Dornan Google Image Search, and then there was Fifty Shades Press Junket Jamie. The latter of which nearly derailed a blockbuster movie, such was the Northern Irish actor’s attitude problem and real-life chemistry with his co-star Dakota Johnson. Remember this particular interview? It’s the person holding the iPad we feel for.

The latest actor who isn’t exactly endorsing his latest release is one Daniel Craig, AKA swimming trunks James Bond. The English actor is playing the famous spy for the fourth time in the upcoming Spectre, and his quotes about the movie and his role in the successful franchise haven’t been glowing. In fact, reports are saying that studio executives have requested he shut up after quotes he made about slashing his wrists before reprising the role of 007 garnered a get-over-yourself response.

Craig made the comments to Time Out London, and they immediately went viral. Grey’s Anatomy star Ellen Pompeo weighed in with a blistering, tweet.

Why all the attitude from Craig when he’s one of the world’s most lusted after leading men? Does he not like Sam Smith’s song for the movie? 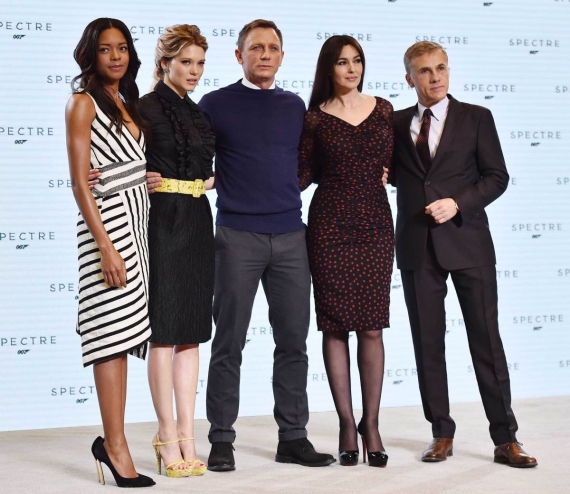 Is the movie in trouble?

Insiders are saying that the script was an initial issue, but that the shoot, in general, was just a bit of a constant headache for all concerned. Craig injured his knee on set and had to undergo surgery. Nevermind the reshoots in recent weeks. Others say the 47-year-old actor is just a ?pretentious? sort in general and thinks he’s above the spy.

Or maybe the movie isn’t great, and Daniel Craig wants to cover his tracks before the critics get typing. The suspense.