LANDMARK
Victorian cleverclogs John Ruskin described Lincoln Cathedral as ?out and out the most precious piece of architecture? in Britain. It’s still spectacular. Constructed between 1185-1311, it was the world’s tallest building for nearly 250 years, until 1549. Play ?Spot the Lincoln Imp?, a benevolent sprite turned to stone after running amok, admire the beautiful ten-sided Chapter House – featured in The Da Vinci Code film’s denouement – and immerse yourself in glorious acoustics during Evensong. (Minster Yard, +44 1522 561 600; lincolncathedral.com)

MEDIEVAL
Adjacent to the Cathedral is Lincoln Castle, whose major revamp last year coincided with the 800-year anniversary of Magna Carta – a pivotal charter issued by King John removing constitutional monarchy. Lincoln Castle has one of four surviving copies on display, and within the fortification’s walls is a Heritage Skills Centre, Victorian prison and a working crown court. (Castle Hill, +44 1522 782 040; lincolnshire.gov.uk)

ARTISTIC
Admire paintings by JMW Turner and LS Lowry, as well as contemporary and decorative arts at The Collection, a county museum and art gallery. There’s archaeology aplenty, a jammers children’s programme and a splendid Stokes caf?, a brand that has been serving Lincolnites fine tea and coffee for more than 100 years. (Danes Terrace, +44 1522 550 965; thecollectionmuseum.com) 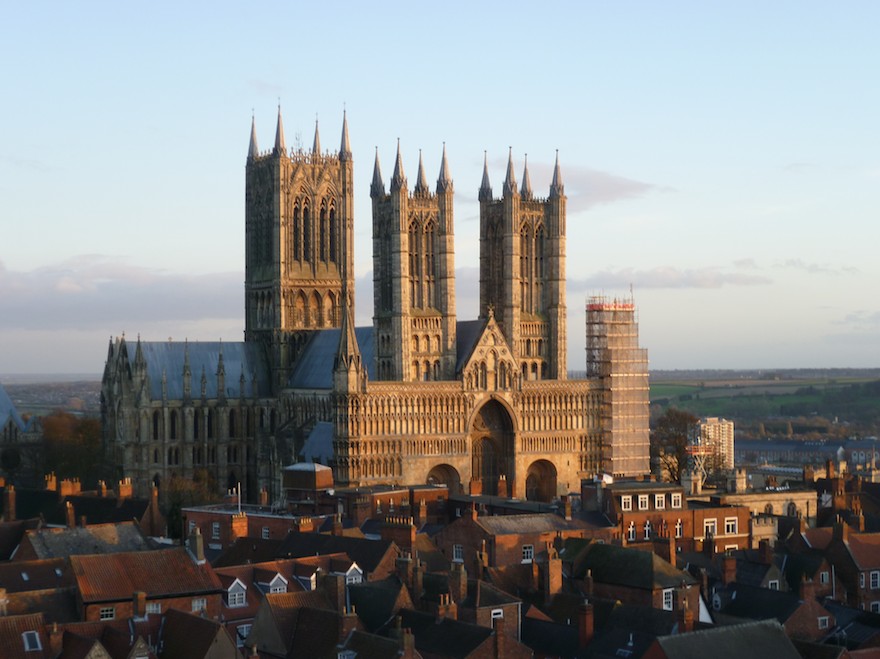 TAPAS
Olivares is a little slice of the Balearics between Lincoln Castle and Cathedral – and I mean little: it seats only 24. Intimate and atmospheric, it’s a muy buen backdrop to simple Spanish classics done well by a husband-and-wife team from Mallorca. Book ahead to bag a table. (3 Castle Hill, +44 7466 522 890)

QUAINT
The Cathedral Quarter has many a tearoom, of which Bunty’s Tea Room is one of the best. Vintage China, bygone tunes and fine loose leaf teas are a huge draw – but Bunty’s biggest USP is its MASSIVE homemade cakes, scones and savouries, including gluten-free options. (18 Steep Hill, +44 1522 537 909)

CONTINENTAL
Say fromage! The Cheese Society – MD Kate O?Meara has a grandfather from Templemore in Co Tipperary – has a splendid retail store on The Strait, where you can buy wedding cheese cakes – actual stacked cheeses. Just around the corner is their licensed daytime caf? offering prix fixe menus, blackboard specials and even gluten-free, vegetarian and vegan offerings. (1 St Martin’s Lane, +44 1522 511 003; thecheesesociety.co.uk) 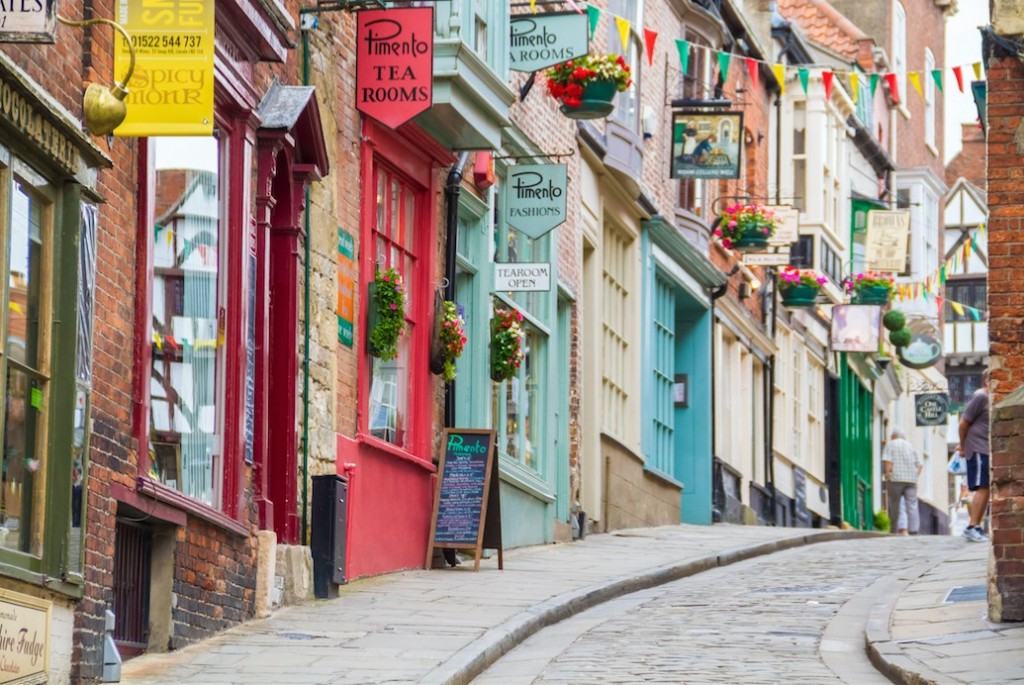 Lincoln excels at ‘dad pubs? thanks to the region’s historic love of real ale – so forgo the high street chains to quaff regionally brewed pints in eclectic surroundings.

QUIRKY
One-year old, The Cardinal’s Hat is in rude health thanks to its expansive range of beers and liquor from British artisan producers and a kooky layout. Its ever-changing cask ale (unpasteurised) and real cider menu keeps locals keen, its gin menu is extensive and its charcuterie the perfect accompaniment for all of the above. (268 High Street, +44 1522 527084; cardinalshatlincoln.co.uk)

GASTROPUB
The Wig and Mitre?is, pleasingly, a music-free zone – but high on chatter and hospitality. Nurse a craft beer and nibble on locally sourced, seasonal snacks in the downstairs bar, or head up to the dining room. Slow-cooked beef with truffled mash and Parmesan parsnips, anyone? (30 Steep Hill, +44 1522 535 190; wigandmitre.com) 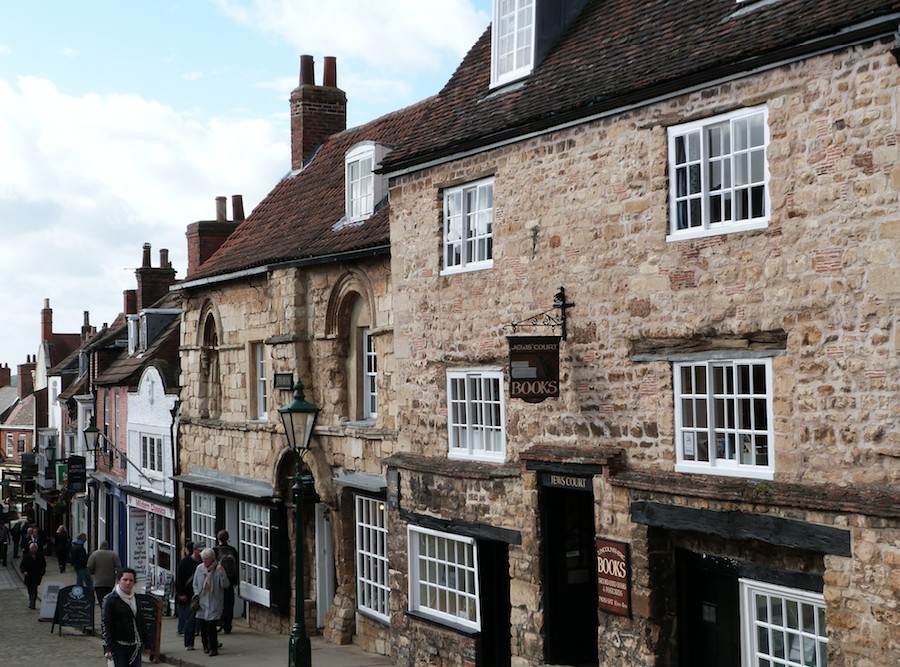 SNUG
It’s mostly standing room only at the spit?n’sawdust Strugglers Inn, whose name either derives from a former landlord who double-jobbed as a hangman or it once being where locals ogled the adjacent gallows in the adjacent Castle Tower (depending on who you talk to). Fancy it ain’t but its guest ales and old-timer punters are top draw. (83 Westgate, +44 1522 535 023)

Lincoln High Street has all the usual high street suspects but Steep Hill (exactly what it says on the tin, so brace yourself) and Bailgate are where the indie boutiques reign supreme.

VINTAGE
Tasty Vintage?began online before expanding to bricks-and-mortar premises in 2007. Its owner Harriet is a member of the Vintage Fashion Guild and has done a great job cherry-picking ladies? and gents? clothing and accessories from the 1920s-1970s, including bridalwear and textiles. (9 Steep Hill, +44 1522 510 524; tastyvintage.com)

HOMEWARES
Beyond the turquoise door of gifts and homewares boutique Forty Four lies super-cool stationery, lambswool cushions by Donna Wilson and a rainbow of melamine cups by Danish brand RICE – and much more. Be sure to leave some room in your suitcase. (44 Steep Hill, +44 1522 527 516; fortyfourshop.co.uk)

BRIC-A-BRAC
Launching this Saturday from 9am to 4pm – and running on the third Saturday of every month – is Brocante Lincoln, channelling French flea markets. Cue second-hand furniture, jewellery and food stalls, mellow live music and craft demonstrations. (Lincoln Central Market, +44 7811 462 355) 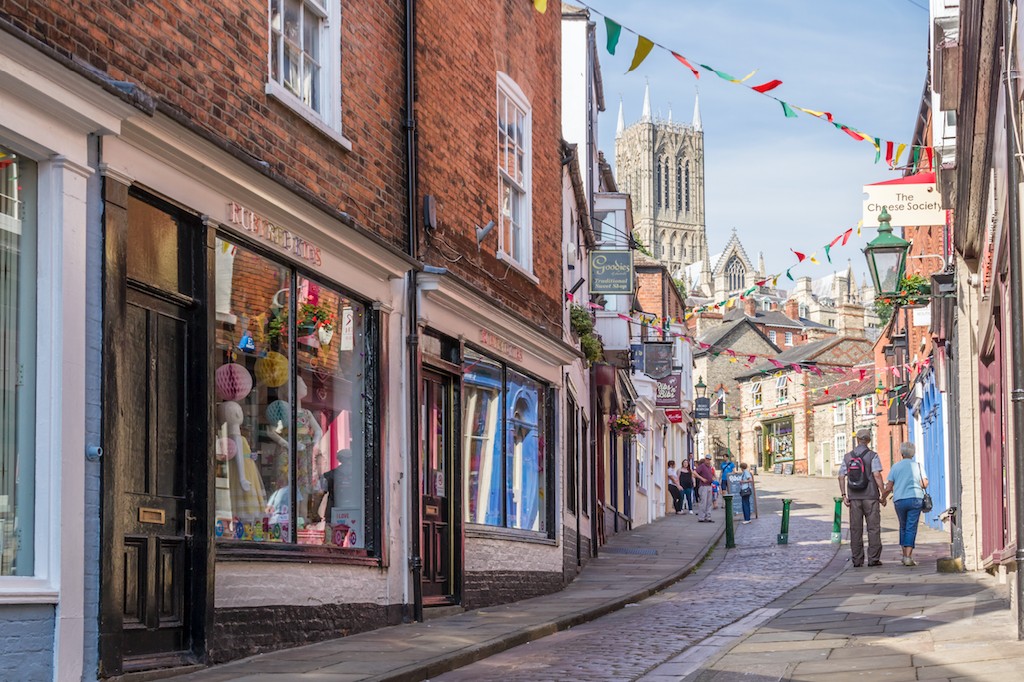 BOUTIQUE
Housed in a former Parish Hall, The Rest is nowadays a plush ten-room B&B around halfway-up the glorious cobbles of Steep Hill. Its licensed Coffee House spills neatly on to a front terrace (open to the public at weekends), Wi-Fi is free, and there are also two garden suites. Doubles from €89. (55a Steep Hill, +44 1522 247 888; theresthotellincoln.co.uk)

HEAVENLY
The Old Palace property dates back to 1720, it being the former residence of Lincoln bishops until 1948. It was respectfully gussied up as a hotel between 2007 and 2009, the adjacent church converted into beautiful guest rooms. And temperance be damned: there’s a fine Gin and Tonic Afternoon Tea. Doubles from €85. (Minster Yard, +44 1522 580 000; theoldpalace.org)

SELF CATERING
Families of four will love The Castle Hotel‘s Castle Cottage, a deceptively spacious heritage property in the Cathedral Quarter with two double bedrooms, two reception rooms, a full bathroom and fitted kitchen. Likewise, the Coach House luxury apartment is a home from home – but more swish. €230 for up to four persons. (Westgate, +44 1522 538 801; castlehotel.net)