Denis the Menace, Gnasher, and Rodger the Dodger are characters who have the ability to define childhoods. Many of us can stand up and proudly say that Beano played a part in our younger years. It made us smile and laugh and introduced us to mischief, much to the dismay of our parents. Those characters were solid friends. Ones you could rely on when days weren’t so good, when things seemed a lot more black than red.

For one 8-year-old boy from County Kerry, Beano was a guardian angel.

Christopher Lynch was diagnosed with autism at the age of two and a half. His mother, Lisa Curran, was studying music in Cork at the time, with a focus on music therapy. Through her interactions with autistic children, she noticed similarities in their behaviours to her son.

When Christopher was one, she realised there were milestones he was not reaching. But, on the other hand, there were ones he seemed to master despite his age. Lisa tells us, “He could arrange the alphabet perfectly before the age of one. It was like he could read everything but he couldn’t communicate.

“All his sounds stopped and it regressed. I started to panic a bit, and I know everyone was like, ‘you’re a new mom and the kids you’ve worked with had autism, so you are just thinking this,’ but my doctor was really good and said we will get him assessed.”

The waiting list in public healthcare was two years, so Lisa made the decision to go private where they waited just three months for an assessment. Christopher was officially diagnosed with autism and hyperlexia.

Lisa stresses that early intervention was vital, saying, “We discovered he could read, so we could communicate with him by writing things down. They were able to diagnose the hyperlexia side of things; knowing everything so early on was so important.”

Hyperlexia is a syndrome which is characterized by a child’s precocious ability to read, but results in a difficulty understanding and using verbal language. The syndrome is not stand-alone and usually accompanies other disorders such as autism.

Christopher is a vivid reader, particularly of Beano and Christmas cards which accompany gifts. This is where Lisa got the idea to get in contact with the comic. “Christopher doesn’t have an interest in Christmas presents,” she tells us. “He will look at the presents and say ‘thank you’, but what he really loves is reading the card. So for this year, to get him interested, I decided to contact his favourite brands and ask would they send out a letter – even to say thanks to Christopher for loving their products. For example, he loves red Dorritos and the Beano.” 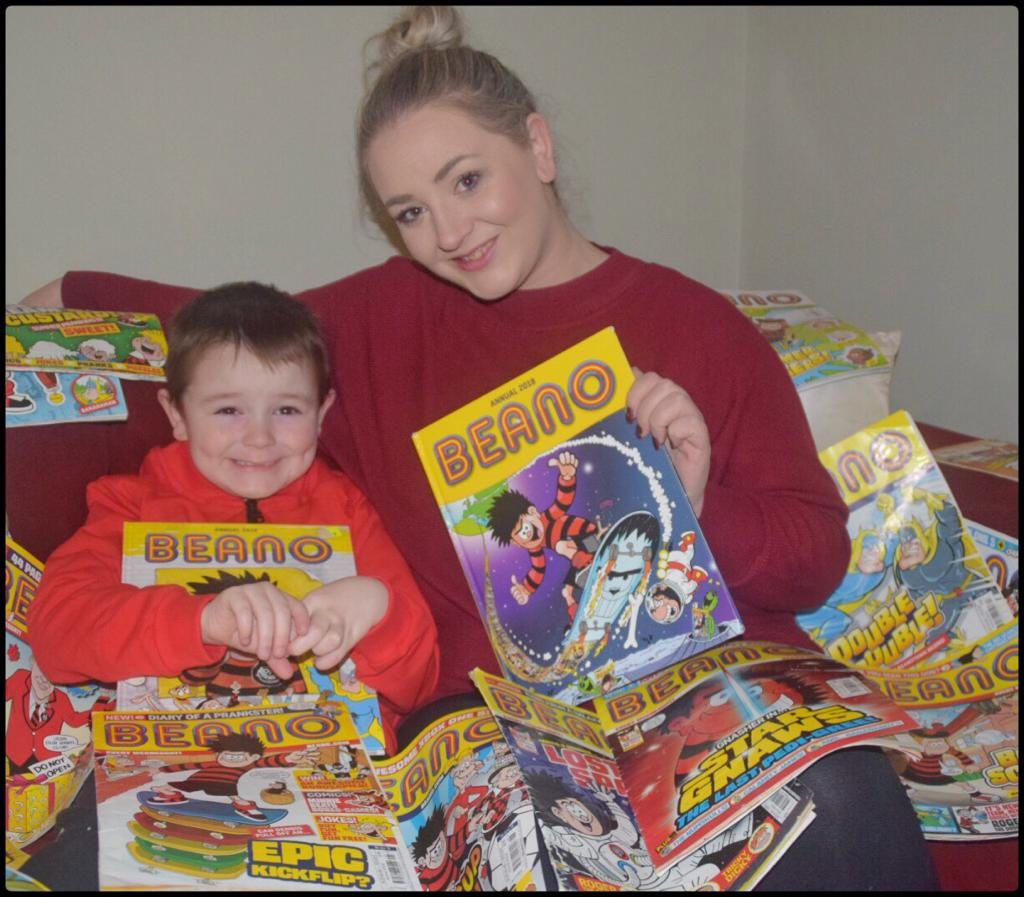 However, the Beano is so much more to Christopher than just a pastime. “I decided to write to the Beano because they have just been so helpful to us. Before children with autism talk, they use these things called PECS (picture exchange communication system), but they aren’t very exciting and can be quite boring. He came back one day from school with a copy of the Beano; he was all about it and Denis the Menace. When I was looking through it with him he was weak laughing because of their facial expressions which are really exaggerated.”

Lisa quickly realised that the Beano was helping Christopher gain an understanding of social cues and interactions that he was not grasping through the PECS, “He was learning how to deal with people being nasty to him. It taught him about consequences; that if you were playing a prank on someone they will be upset and that it will come back on you, which is Karma in a way. That’s very hard to explain to a child anyway, but from reading the Beano he understood.”

“Then they print jokes along the end of the pages, and Christopher had been working on social interaction and how to introduce himself to others. So he used to go up and just say, ‘what’s your name’, but kids don’t introduce themselves that way. But what he started doing was going up to the kids his own age and saying, ‘Hi, do you want to hear a joke?’, and he’d tell them and get a reaction and he loved it. Now he uses them in situations where he doesn’t know what to say, and if there is an awkward silence. He wants the reaction because before he would cowl away and want to leave.”

Lisa emailed Beano and told them snippets of how the comic had positively impacted Christopher’s life. They replied and asked if Christopher would like to be involved in their ‘Make me a Menace’ segment. “It’s usually English kids that they use in the comic strip,” Lisa explains, “and when they contacted me, they said that he would be the first Irish child to be featured and the first child with autism to be included. They said they would love to feature him and turn him into a superhero”.

Both Christopher and Lisa immediately agreed and they are now awaiting artwork from Beano. They are allowing Christopher to take creative control of what the character illustration will look like, from his hair colour to what type of jumper he will wear. He will receive his very own artwork to keep, and the comic will be officially published sometime in the new year.

Christopher and Lisa are unsurprisingly ecstatic with the development, but Lisa speaks clearly of just how important this inclusion is for her son. “His school is fantastic,” she says. “They are so open to him and they all understand him, but he is Christopher that has autism. Now, he’s Christopher that’s in the Beano. So I think it’s just nice for him to be known as something else for a change.”

Undoubtedly, Christopher will now have to tackle the challenge of fame as the newest star of the classic comic.

But with or without the Beano, Christopher Lynch is, most definitely, a superhero.