California in Flames: ‘We are surrounded by fire. We may not make it out alive.’

The death toll from the wildfires ravaging California has now risen to 31. Amanda Cassidy reports on the states most destructive fire and the harrowing effects on residents.

It is being called the “Camp Fire.” It began on Thursday and has destroyed nearly seven thousand homes. A rural fire that turned into an urban nightmare — an increasingly common occurrence in California. 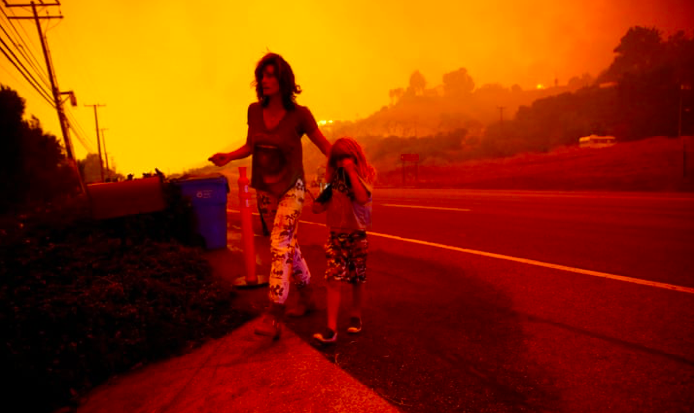 Today the death toll rose again and more than 100 people remain unaccounted for. The blaze to the North of the state has already spread over 425 square kilometres. Today, authorities have requested a team of DNA specialists to help identify victims as crews step up the search effort. Meanwhile, locals are demanding to know why more resources have not been freed up to tackle the blaze. It is not yet clear if President Trump will set aside federal funds to help those affected to rebuild their homes. The Governor of California, Jerry Brown has requested “major disaster declaration” from the President. It is hoped that these funds would bolster ongoing emergency assistance as well as helping individuals who need housing and crisis counselling.

Last night at a town hall meeting about the impact of the fire, Paradise local, Denise Pepper said everyone is in shock. “When you’re in this position, you’re homeless. There’s nothing. The air was so thick last night, you could barely breathe. Thank God I have my husband and we have our two dogs. You know, so, whatever help you can get. You want answers now, you do.” 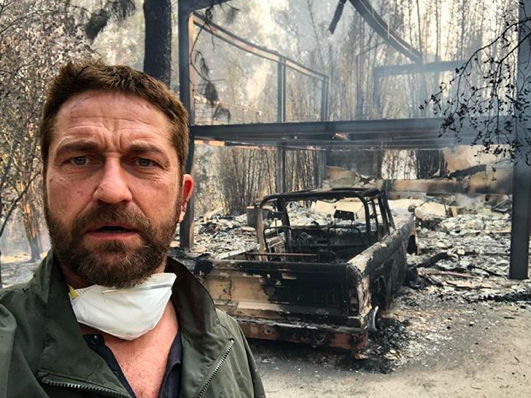 Actor Gerard Butler was among the celebrities whose homes were damaged in the fire. In a bleak Instagram picture, Butler shared a photo of himself standing in front of a burned out part of his house with the caption “half-gone”. Singer Miley Cyrus’ house was completely destroyed in the blaze. She took to social media to tell fans her and her partner, Liam Hemsworth were safe. “Completely devastated by the fires affecting my community. I am one of the lucky ones. My animals and LOVE OF MY LIFE made it out safely & that’s all that matters right now. My house no longer stands but the memories shared with family & friends stand strong.”

Tamara Ferguson is a neonatal nurse at the Feather River Hospital close to where the fire continues to rage. After fearing for patient’s safety, she along with colleagues started to evacuate out of the hospital but ended up in grave danger. “As the last of the patients were loaded into ambulances and staff cars, we hopped into an ambulance with a very critical patient. We started moving forward as we watched flames around us. It only seemed like seconds but I think we got about a mile when we heard on the radio traffic that the ambulance in front of us was on fire. We turned down a road into a driveway and stopped. We were told we can’t go any further right now.

I looked around as fire surrounded us, transformers were blowing up and the winds were so fierce. I realised we might not make it out at alive. We all got out of the ambulance and moved patients to the garage of the only house not burning. We laid them down and tried to reassure their scared faces while hiding ours.

I wanted to run, just get out and run down the street and dodge flames and get to safety but I remember, I am not faster than a fierce, fast-blowing fire. Do I stay in the ambulance? Hide in the garage with my patients? I looked around and it just kept surrounding me, growing bigger, I saw cars stuck in gridlock trying to leave, fire surrounding both sides of them, I felt so scared, hopeless, and desperate. I immediately thought of my kids, and the man I love so much ..my family, and I lost it.” 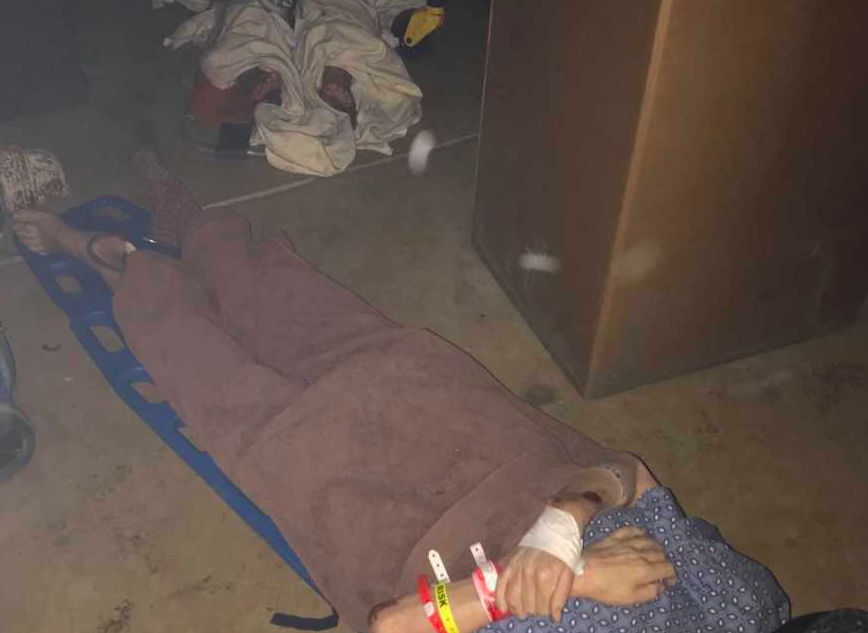 Tamara (42) wrote in her Facebook post that as they tried to help patients lying on the ground of the abandoned house and keep the fire away from the building, she got in touch with her children.

“I called them all and between sobs, I said how very much I loved them, how sorry I was that I let them down, or made mistakes and asked my oldest daughters to please make sure their younger siblings were taken care of and knew how much I loved them. As the fire continued to grow, I was scared but not enough to stop what I was doing. We helped a new mom who couldn’t walk yet after her c-section put her new baby skin-to-skin and helped him breastfeed.” 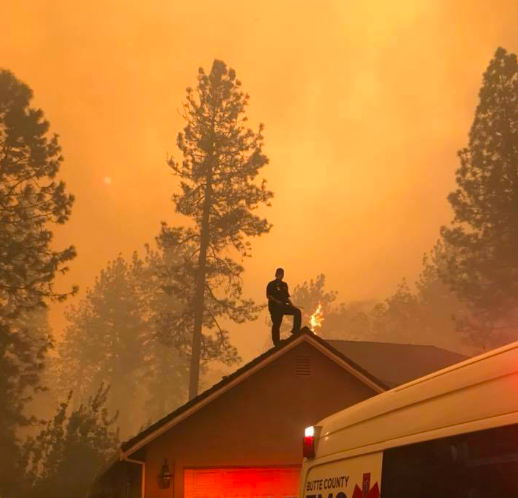 Tamara fought to keep the fire at bay. “A firefighter said, ‘clear all this brush so this house continues to keep us safe.’ Chrissy and I were clearing brush by handfuls. We found a broom, rake, planters, buckets, and didn’t stop. Sure, we had our breakdowns and felt hopeless and then our jobs and why we do what we do come back to reality.”

The group of staff and patients finally made it back to the safety of a nearby hospital but Tammy says she is forever changed by what happened over the weekend.

“We watched the flames beside us, burnt cars in the road, power lines down, and fresh homes burning. It went on for miles.”

“I honestly couldn’t believe I was alive and that I would see my family, kids, and boyfriend again. I called them and told them I made it. They were all crying before I even told them because they couldn’t reach me and thought I was gone. “ 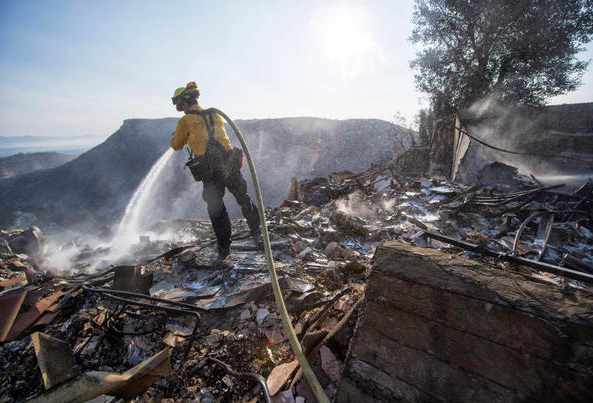 Some residents have been allowed back to their neighbourhoods as firefighters work to cut a perimeter around the flames. “It really seems like we are chasing it, it moves so fast, so aggressive and the fire behaviour is so intense” according to one LA fire-fighter. Climate change contributes to the growing destruction from California wildfires. The hot and dry weather help carry fires thousands of miles further. Urban sprawl is also to blame with encroachment into formerly undeveloped land a real catalyst. 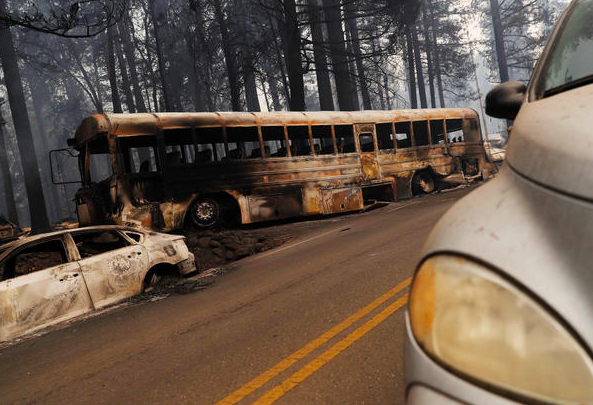 At the foot of the Sierra, the entire town of Paradise is still smouldering. As firefighters try to contain the last of the fires, residents are trying to understand the scope of the tragedy. Fire chief, Alejandro Saise was one of the first on the scene to survey the damage. Speaking to the LA Times, he says they have only seen one house still standing. “There is no easy way to say it”, he says. “I’ve texted, ‘Sorry, but it’s gone’ at least 30 times in the last 48 hours.”

At the nearby town of Oroville, hundreds of evacuees have set up camp in the church. A message board with the names and numbers of people searching for loved ones hangs on the wall inside. 40-year-old Anthony Campa says he began to panic when the sky turned black. “ Most of our friends are homeless. This is a whole town, just wiped out. The majority of the people need to know if they have a home or not. It is the not knowing that’s the killer. Paradise was an exceptional place to live for generations. It may be again, but not for generations to come.”