The recession of 2008 was a hideous one, and for many brought tough times. As editor, at the time, of Ireland’s most prolific glossy magazine, I had a grandstand seat view of what was going on (a rather rickety seat, I might add – none of us were immune to the effects of the recession). And while it was tough out there, it was a time of change. And whether they wanted to or not, women were rising to the challenge: they were pivoting in their careers, or returning to work, or taking over the role of family breadwinner in households where their partners had landed in unfortunate circumstances.

None of these situations directly applies to Brooke & Shoals’ founder Alison Banton, but the recession certainly forced her hand to reposition her luxury fragrance and candle business. It was a Sliding Doors moment in time, and the direction Alison chose led her to huge growth, success and happiness over the past decade. But obviously, Banton’s story starts before then.

Alison always had a creative streak, and was versed in the art of fragrance from an early age. As a child, she would visit her doting maiden aunt Mollie in Skerries, and the two would pick roses in the garden and make “perfume” by adding the petals to water. Aunty Mollie would tell her beloved niece that the “babbling brook and whispering shoals” would help turn her mixture into perfume overnight. When Alison would return the next day, the “brook and shoals” had performed magic. In reality, Mollie had sprayed perfume into the mixture. Years later, these memories were the inspiration behind Brooke & Shoals, and Mollie’s magic was switched up to professional qualifications in fragrance blending from the Grasse Institute of Perfumery and product development with industry legends Melinda Coss and Karen Gilbert in the UK.

The path to perfume didn’t run straight from Skerries to Grasse, however, with Alison’s business brain taking dominance for a good few years. An alum of UCD with a master’s in economics, Alison’s first job was with Goodbody Stockbrokers on their graduate training programme, before a career in financial services. All the while, she would paint at the weekends, encouraged by her artistic mother. When Alison was 26, her mother died from a brain haemorrhage. “She was very charismatic, intelligent and creative, and it was so sudden with no warning,” Alison remembers. “My brother and sister and I were in shock after it happened. I was completely heartbroken, and my grief affected every part of my life. I shut down my creative side and was so sad.”

Alison moved to London and took up a job with AIB Capital Markets. “I was actually grieving and didn’t know it.” But over that time, she had a Eureka moment. “I realised that to feel completely whole, I needed to embrace my creative side in work, just as my mum had advised me all those years ago; the corporate financial world was never going to satisfy me.” Alison returned to Dublin, married her long-term boyfriend Guy, and the two now have two teenage girls, Mia, 16, and Lara, 13.

“Life is precious, and we must be thankful for only having small problems to deal with every day… you never know when life may throw you a sucker punch.”

Brooke & Shoals was launched in 2004, a brand and a gift boutique in Greystones. It grew steadily to become Alison’s full-time focus in 2007, when she opened a second, bigger store in Dundrum Town Centre. “I ran it for 18 months before the recession hit – the economy fell off a cliff, and there was no soft landing; I fell fast and hard.” “We had to re-mortgage our house to restructure the debt of the Dundrum business after I closed it down. Luckily, Guy had never got involved in Brooke & Shoals and stayed in his safe corporate job, so we still had his income.” The next few years, Alison traded out of the Greystones shop, taking no income, but paying off the debts from Dundrum and paying the shop staff, who are still with her today. “Somehow, I managed to keep my business afloat. I found it hard to be creative, but resilience is my middle name, so I picked myself up and kept going. I knew my products were still great, and people kept buying them during the recession. Other retailers had started asking if they could stock my products. So I decided to scale up the wholesale side of the business and supply my products to other shops. I was determined to create a phoenix from the ashes.”

Since then, Brooke & Shoals has experienced huge growth. The collection of candles, fragrance, hand, home and body products consists of 60 different products, in myriad scents, from the bestselling Grapefruit & Lemongrass to the heady Saffron, Patchouli & Oud; soon to launch is Lemon, Mandarin & Magnolia. All are priced in the “affordable luxury” space. “Candles are €20, so you won’t be hesitant to light them,” says Alison. Sold in Ireland, the UK, Germany and Denmark, Brooke & Shoals’ plan for 2018 is an expansion into the US. Alison is the creative catalyst behind each new blend, and oversees an expanding team of 14, from retail to distribution to marketing. At her core? In addition to the aforementioned creativity and business acumen, it’s a gentle tenacity, resilience, and lots of energy.

“My mum’s death was a pivotal moment that changed my whole life, and my outlook,” she reflects. “I realised that life is precious and can’t be taken for granted, and we must be thankful for only having small problems to deal with every day, because you never know when life may throw you a sucker punch. Mine is a story of hope and rebirth; of how I eventually found and embraced my creativity. This journey has finally helped me define what makes me happy, and what’s important in my life.” 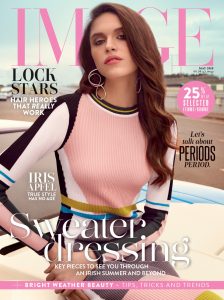 This article was originally published in the March issue of IMAGE. For more beauty features, check out the May issue, on shelves nationwide now.