‘It’s about bringing it to life’: Irish sports star Nicci Daly on motorsport and being a role model for younger girls

We sat down with Irish Hockey International and motorsport ambassador Nicci Daly to discuss that World Cup silver medal, as well as her hugely successful initiative to increase the awareness of women in motorsport.

Dubliner Nicci grew up surrounded by all things racing. Her dad, Vivion, was one of Ireland’s most successful racers; her uncle Derek Daly made it all the way to Formula 1 in the 1970s and she told us she spent most of her childhood in Mondello watching her father compete.

“I studied engineering here in Ireland and then I went across to Cranfield University in the UK to study a masters in motorsport engineering. From there I went on to the States and worked for an Indycar team as a data engineer so I got a lot of experience working trackside which I loved” the 31-year-old tells us, her face lighting up at the memory.

Related: Why Katie Taylor should make us rethink how we support women in sport

But what is it like being part of a world so historically dominated by men?

“There were females working at the highest level and it was really encouraging for me”.

“Well, I used to feel a little bit aware of it at the start especially when I went to college. I was one of two girls in a class of 28 so that was quite daunting. Being so new to the sport from a technical level, it was intimidating but I think if you want to achieve something you don’t let those things get in the way. If anything, it makes you more motivated and determined to actually get there.” 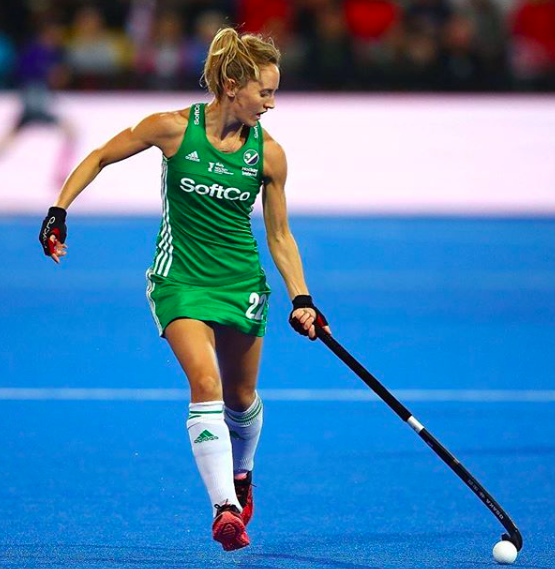 Nicci has spent the last few years working as a Data Engineer for their Indy Lights program and plans to return to Juncos Racing when she finishes her hockey career.

In fact, Nicci says it was her experience stateside that made her realise not only was it achievable but there were a lot more women involved than she’d realised. “I noticed that there was a few more who had made it to the highest level, working for teams like Chip Ganassi racing who are big names in Indycar racing. There were females working at the highest level and it was really encouraging for me. I think that since then, awareness of women in the sport is only growing which is great for people who are starting out, or maybe planning to do a course because they can see more people involved. It might give them that extra encouragement to go ahead and do it”.

While making history for women’s hockey last year, reaching the final in the World Cup, Nicci has also been focusing on Formula Female, an all-female racing team which hopes to inspire, educate and help open more doors in motorsport for women.

“Formula Female is something that I wanted to set up to increase the participation of women in the sport on and off the track. I wanted to bring a little bit of education around how STEM subjects play a role in motorsport and the opportunities that are now there. There are drivers out there that have made it to the top — the likes of Danica Patrick (the first female ever to win an Indycar race) and Rosemary Smith, who is an Irish motorsport legend, and Nicole Drought from Tipperary who is our leading female racing driver in this country. She’s achieved so much and has probably not even been given the recognition she deserves. Formula Female is trying to highlight the achievements that Nicole and others have made, and use her visibility to encourage younger girls to get involved in all aspects of motorsport”.

So, when it comes to working in motorsports, how do people react to what you do?

“They think it is kind of cool. People are more open now to trying new things and getting involved. The whole push for women in sport in general is great because it means that girls are being exposed to all sports and motorsports is just one of many. I think that there has never been a better time for young girls to get involved in motorsport and hopefully we will see that over the next couple of years.”

“It is about bringing it to life and showing that it is possible.”

How do you feel when people describe you and your determination as ‘inspiring’?

“What we achieved with hockey was amazing and it is brilliant for young hockey players to see that, wow, they can actually reach levels like that and they can see it on their doorstep here in Ireland. I feel that it is the same in motorsport. It is about bringing it to life and showing that it is possible. I think it is great to have that responsibility as a role model in a sport I actually enjoy. If it is inspiring to others, then that’s great.”

Read more: Female sports coaches are inspiring so why aren’t there more of them?