Brand Sussex: The biggest thing we’ve learnt from the Harry and Meghan saga

We can’t get enough of the latest scandal to befall the Royal family. But, as Amanda Cassidy discovers, fading from the spotlight has actually put a lot of details normally kept private, under the spotlight

I may not be the biggest Meghan fan (based on pretty much nothing expect raggy media coverage) but when it comes to getting the most out of your life, I’m all for walking your own walk.

The couple have been under an enormous amount of pressure in the media since their marriage in 2018. And despite Harry being raised in the glare of such a spotlight on his life, he never developed the thick skin some believe is necessary to survive this type of role. But as Meghan herself put it, it isn’t good enough just to survive, you have to thrive.

Go your own way

Reading between the lines in their most recent documentary Harry & Meghan: An African Journey, they talk about the difficulties of being public fodder. It was clear to anyone that the actual message here was that their mental health was under threat.

So fair play to them for deciding to move in a different direction.

But what isn’t yet clear is how this royal-but-not-royal at the same time life will pan out. Do they want to have their cake and eat it? Probably. Shouldn’t their duty be restricted to upholding the throne? Not necessarily. If William and Kate didn’t exist in such a dutiful capacity, this might be the ‘abdication crisis’ the papers love to shout. 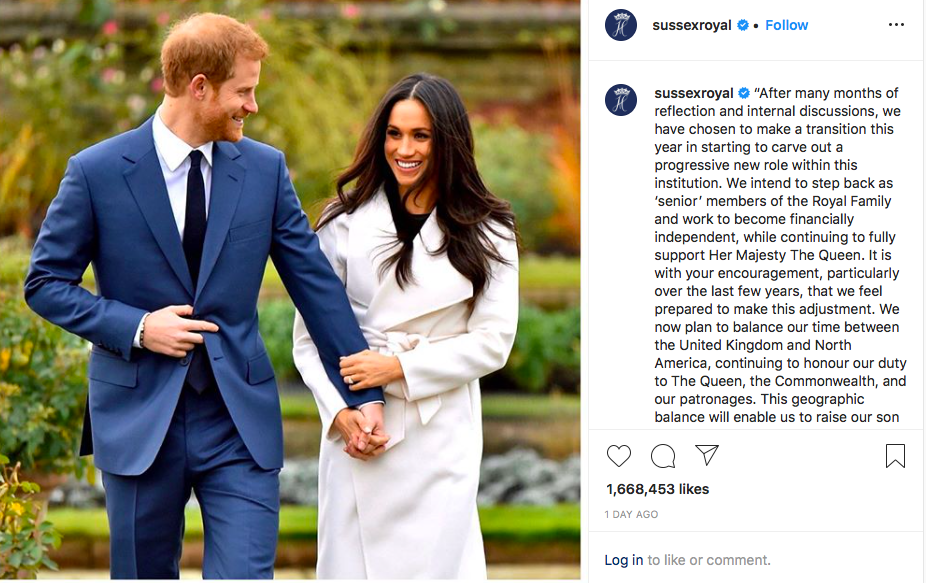 But Harry is The Spare, as everyone likes to remind him. And as such, he has more freedom to spread his own wings.

But what we weren’t expecting from this semi-detachment of the Windsors was to be let in on a few insider practices.

Published just moments after that Instagram announcement, the couple’s brand new shiny website is quite telling. With a no-nonsense approach, it lays bare details of exactly how the current financial arrangement works. It points out that they get just 5% of their funding for official duties from public money. This excludes the high costs of their armed security detail or their domestic and overseas travel. The remaining 95% of their funding comes from Charles’s private income from the Duchy of Cornwall.

According to the Guardian, Harry inherited £7m from his late mother’s estate, which will have grown with investment. He and William also inherited her dresses and valuable jewellery. He is also thought to have received money from a trust fund left by the Queen Mother.

In their new financial arrangement, Harry and Meghan want to give up the money received from the Sovereign Grant. They claim that this will enable them to continue “charitable endeavors as well as establishing new ones,” while also allowing them to earn a professional income — which they are at present forbidden from doing.

The aim is to be as transparent with the media, while also controlling what is released about them, rather than working with the Royal Rota — an outdated system where a few select newspapers and correspondents get the first dibs on images and statements from the Royal family.

“The goal is to focus on what connects us, instead of what divides us” their website promises hopefully, with the naivety that comes from being a woke, actress from LA.

Another interesting aspect of what is outlined on the couple’s website may be in response to the usual slags about the taxpayer funding their lavish lifestyles. “The contribution from UK taxpayers towards the full overhead of the British Monarchy is equivalent to approximately £1 per head per year,” it states. But also points out that “the British Royal Family generates an estimated £1.8 billion a year in tourism revenues for The United Kingdom.”

“They will never be left alone. They will be hounded like Diana was hounded”

If you scrape away the hysteria, Harry and Meghan just want to be left alone to do their own thing — probably in the more casual, A-list glow that the US can provide.

Although born into this respected institution, that doesn’t mean Harry wants to live it. Or should live it. This is the next best option, in his mind.

Mixing stuffy pomp and ceremony with the glitzy world of Hollywood is like putting oil with water. And something had to give. Meghan probably did get her own way but that isn’t to say it would be good for Harry. He never really seemed very comfortable in his Royal shoes.

Who really cares if they are being selfish or dutyless or spoilt, let them and their young son have their space. Live and let live.

But they are mistaken about one thing — they will never be left alone. They will be hounded like Diana was, stripping her of any privacy or new-start-ability.