Her Mrs. Carter Show World Tour was the highest grossing female tour of 2013, whilst the no-frills digital release of her new album sold a whopping 6 million copies in the matter of days earlier this year. 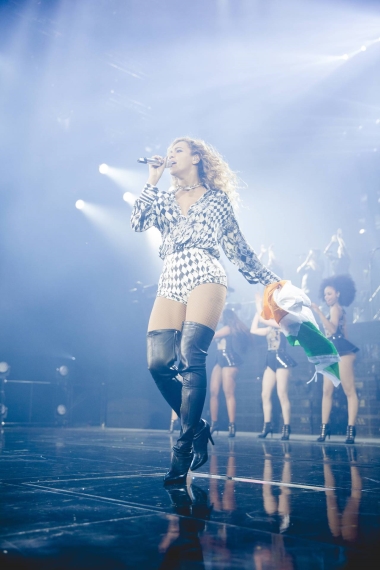 Accounts of her Dublin show have been coming in fast and furious, with her showmanship hailed once again as unparalleled ? Queen Bey reigns supreme. Tomorrow will be the last of the four Dublin shows, and while frenzied fans continue to haunt the Fitzwilliam Hotel where she is staying with hubby, Jay Z and their daughter Ivy, over in IMAGE HQ we are obsessing over her outfits. 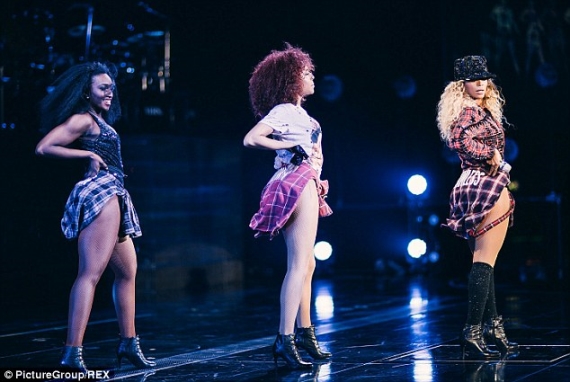 Reportedly there are 7 outfit changes during the Dublin shows, each jaw-dropping and gorgeously OTT. Most of them were made bespoke for her by Versace, with gems and hour-glass shapes galore and all for our delight. Ranking among her boldest choices are the 1990’s inspired shirt-skirt worn with fish-net tights, along with the Harlequin themed monochrome shirt and shorts. But hands down, the most sensationally memorable outfit of the tour is the gem encrusted, figure hugging gold jumpsuit which she wears for Drunk In Love – the performances have also seen a surprise duet with Jay Z. Bey can make all the bold decisions she wants, but she stays our golden girl. Always.