Sometimes all you need to do is start. Success and glory will follow, but it’s the starting that’s the hard part. IMAGE’s community of smart, sassy,  bright, switched-on women and men are the people brave enough to take those first steps. They’re the game-changers and the wave-makers and we have so much to learn from them. Barry Finnegan is an Irish artist whose work stops you in your tracks. Throughout his career, he’s been brave and followed his heart, as well as his instincts. The result is a collection of huge, charcoal, photo-realistic portraits known throughout the country. We took five minutes to find out what drives him, his inspirations, and hear about a chance encounter with Robert De Niro. 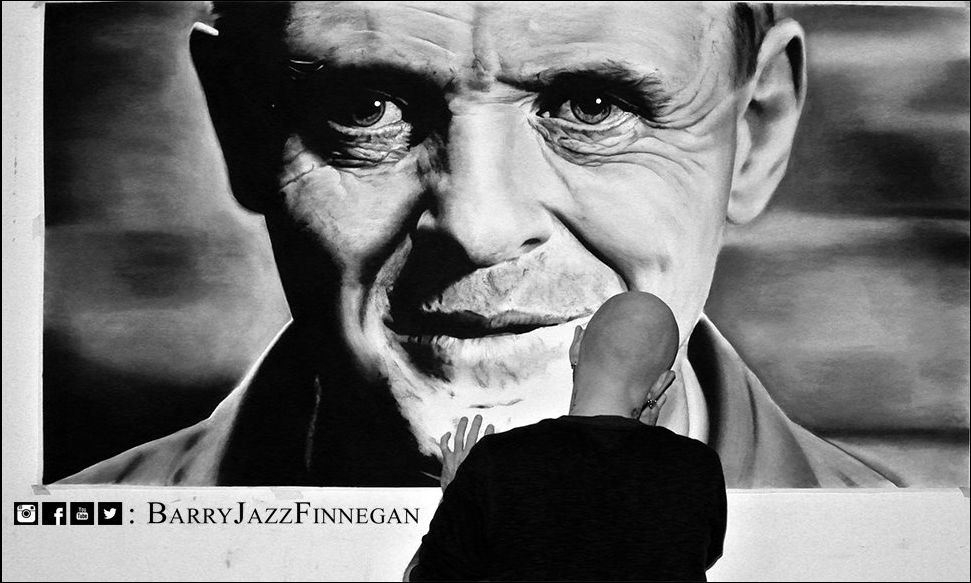 When did you know what you wanted to do for your career?
Since I was very young, I always had a passion for art, and as I grew older and the question “what do you want to do when you grow up” came along, art was the only true heartfelt answer.

What kind of difficulties did you have early in your career?
Coming from a small town, saying you wanted to be an artist wasn’t easy. I left my hometown pretty much as soon as I completed my leaving cert. It’s very hard indeed to get taken seriously as an artist. I don’t believe college was the way to go about it, even though I went to college for a related field. I believe that every artist will find their own style and techniques. Then each piece produced is 100% theirs.

What’s the best piece of life advice you’ve ever received?
Wow, there are plenty, but one I try to abide by is simply “live every day like it’s your last”.

What has felt like the biggest risk in terms of your career?
Art is always risky. There is no guaranteed weekly income which is why I still work part-time.

What has been your biggest failure and what did you get out of it?
I never saw a mistake as a failure, only as a learning exercise. I have plenty of those.

What do you feel has been your biggest success?
I have had a few big breaks in my art career. I was drawing a picture of Robert De Niro from Raging Bull in Madison Square Garden a while ago during a boxing event. I was positioned right beside the ring. De Niro’s son, Raphael, ended up buying the piece. The money went to a fantastic charity that supports the families of troops who had passed on and the drawing now hangs in Roberts country estate.

Do you believe in setting goals and, if so, what is your approach (five-year plans? yearly resolutions? vision boards?)
I don’t have a “five-year plan” as it would go against my “live every day” philosophy but I’m a big fan of making lists. My father’s advice, make a list every day and enjoy the simple act of ticking the things you get done. It’s like making your bed in the morning, no matter how much you did or didn’t get done in the day, you thought enough of yourself to have a made bed to come home to. It’s comforting and so simple.

What is the element of your work that gives you the biggest buzz?
The eyes. If I can capture an emotion in the eyes, I’m happy. I get involved with the emotion, try to think what that person was thinking at the time.

Do you find the work-life balance thing a struggle?
Definitely, I work mostly at home. It’s hard to know when work ends and life begins. It’s a constant struggle for any creative mind.

What personality trait (positive or negative) do you think has helped you achieve your successes?
Everyone has a positive and negative side. I couldn’t pinpoint where anything comes from specifically, but my family and friends support is definitely paramount to why I’m still doing this.

BMW want to give you €1,000 to pursue your dream. Just like that. Click here to enter, it takes five minutes.

Sneak preview: Paul Mescal is a sitter on tonight’s Portrait Artist of the Year

VIDEO: Inside the studio of Galway artist Finbar McHugh