Angelina Jolie is one hell of an inspiring woman. Earlier this year she made the decision to speak out about her brave choice to undergo two preventative cancer surgeries: a double mastectomy (she did this when she discovered she carried the gene that increased her risk of getting breast cancer by 87%), and the removal of her ovaries and fallopian tubes (she also realised she had a 50% chance of developing ovarian cancer). She is frequently praised for her humanitarian efforts, still has a movie project or two under her belt and combats all this while raising her large family with husband Brad Pitt. She has done an awful lot for a woman of 40.

Her decision to speak out about her treatments was lauded the world over and now the actress/activist and opened up in an interview with Vogue and explained that reaching 50 has a more significant meaning to her than most.

“I feel grounded as a woman. I know others do too. Both of the women in my family, my mother and my grandmother started dying in their 40s,” Jolie-Pitt told Vogue in its November issue. “I’m 40. I can’t wait to hit 50 and know I made it.”

The now Mrs Jolie-Pitt lost both her grandmother Lois Bertrand and mother, Marcheline Bertrand, to long battles with ovarian cancer. In the interview, she said she now looked to the future with optimism after her surgeries and added that she had absolutely no regrets about speaking out. 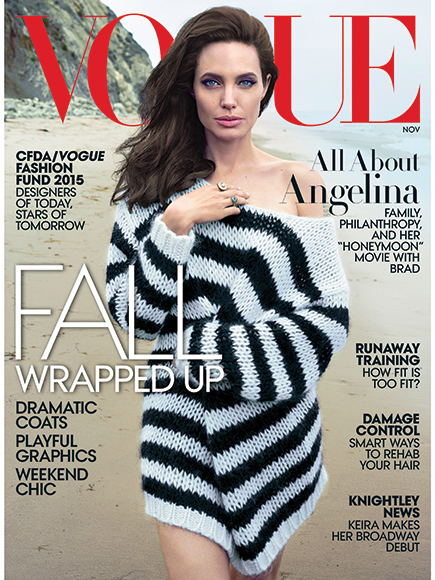 “My mother’s ovarian cancer was diagnosed when she was 49,” she wrote. “I’m 39,” she wrote in a powerful New York Times op-ed.

“[Speaking out] really connected me to other women,” she said. “I wish my mom had been able to make those choices,” she continued, adding that her mother was the major influence in her decision to have both procedures done.

“I know my children will never have to say, ‘Mom died of ovarian cancer,’, ” she said.

She acknowledged that she was confident in her decisions, but said both surgeries were not easy to go through. “It’s hard. They are not easy surgeries. The ovaries are an easy surgery, but the hormone changes – interesting,” Jolie continued.

Being the strong woman that she is, she said that she managed to try to laugh during the testing time. “We did joke that I had my Monday edit. Tuesday surgery. Wednesday go into menopause. Thursday come back to edit, a little funky with my steps.”

As always, we applaud Jolie for her inspiring words.