Amy Schumer: ‘I Want To Empower Women And I Want A Jet’

Amy Schumer is a breath of fresh air. Compared often to Lena Dunham, we’re thrilled to see more and more figures emerging on the scene who represent women in all guises. They’re not stick thin, they’re not drop dead gorgeous in the conventional sense but they’re incredibly talented and they’ve always got something interesting to say. They’re honest and they’re happy in their own skin. Through their work as comedians, writers, actors, they’re reassuring women from here to Timbuktu that it’s okay to eat a kit-kat if it makes you feel good, that sex is nothing like it’s depicted in the movies, that even the most successful of people feel like sh*t sometimes and that cellulite isn’t a reason to self-loath.

In a recent interview with Glamour magazine, for which Schumer graces the cover, the comedian had some insightful points to make on feminism, her life goals?and why she doesn’t regret her comments made in a recent acceptance speech. Read the full interview in Glamour?and check out some choice quotes below.

Amy on sexism: ?Every woman deals with it most every day of their lives. Growing up, it’s just in your day-to-day. There are all these preconceived notions of what it means to be a woman or a girl, and straying from those ideas of femininity is sort of shocking to people. I felt angered by that as a kid. I felt like that was unjust. Like that was not right.? 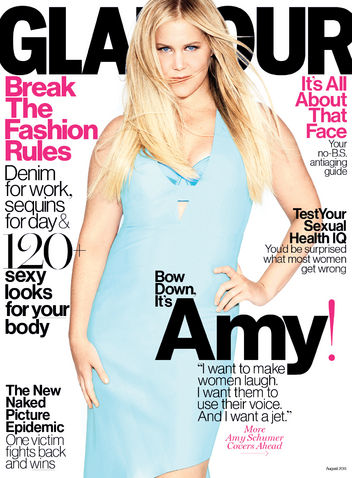 Amy on her ‘I can still catch a d**k’ comment during her recent award acceptance speech: ?If a guy was like, ?I can get p’sy whenever I want,? that guy would be a dickhead. But to deny that there’s a major difference is ridiculous. For women, we’re taught to eat less until we disappear. And trained to believe that if you don’t look like everyone else, then you’re unlovable. And men are not trained that way. Men can look like whatever and still date a supermodel. I’m proud of what I said. I think it’s good to see somebody saying: I have a belly. And I have cellulite. And I still deserve love. And to catch the old D. And to not apologize.”

Amy on becoming the new face of feminism: ?It was very unexpected. I don’t try to be feminist. I just am. It’s innately inside me. I have no interest in trying to be the perfect feminist, but I do believe feminists are in good hands with me.?

Amy On feeling beautiful: I remember feeling very beautiful and not even thinking about it. In fifth grade, this boy, a friend, was like, ?You have a big butt.? That was the first time it occurred to me that people were shaped different. In sixth grade I had a new outfit?tight pants and a tight ribbed shirt?and [another boy] was like, ?Whoa, Big Bertha.? I was like, ?Oh, big, that’s not good.? But then when I was a freshman, I heard the senior boys were coming to our volleyball games because they liked how I looked in booty shorts. So I got feedback on both ends of the spectrum. But I had good confidence. Appearance has so little to do with where we should get our confidence from. But everywhere we turn we’re told we’re supposed to look this certain way. Sometimes I don’t know the difference between J.Lo or Beyonce or Kim Kardashian, if I look quickly! I have looked at myself in the mirror and thought, This is how you look. Embrace that and move on. And Leesa Evans, who was the costume designer on Trainwreck, explained that the way clothes fall on people is never right just out of the gate. You have to get them fixed! But confidence has nothing to do with how you look. I feel happiest when I’m with friends and I’m working really hard.

Amy on influencing other women: ?I hope I do influence other women to set better boundaries for themselves. You’ve got to be vocal. You let people know. Their ego’s a little bruised. Then they adapt? I have gotten death threats?that was scary. But it just made me want to use my voice more.?

Amy on her life goals: ?I just want to get the most money I can. Sorry. I want to make women laugh. I want to make them feel beautiful in their own skin. I want to empower them to use their voice and not apologize. And I want a jet.?