‘A woman in a hospital nightgown is wandering the corridor outside the Labour Ward… She is looking for something she has lost: her baby’

In her new book, author, journalist and founder of the Positive Birth Movement Milli Hill writes about the birth room power imbalance.

The year is 1975. A woman in a hospital nightgown, shaky on her feet, is wandering the corridor outside of the Labour Ward, using the wall to support her. It’s 3am. She is looking for something she has lost: her baby.

On the previous day several things happened to her that were ‘routine’. When I say ‘routine’, what I really mean is that nobody asked her permission. She was induced because she was past her due date. Her pubic hair was shaved off. She was given an enema.

The opioid pethidine was injected into her thigh shortly before delivery. And her perfectly healthy baby was given to her and her husband to hold for a while, before being taken off to the hospital nursery for the night. She did not actively consent to any of this. It was just ‘how it was done’.

Ushered back to bed by the stern but kindly matron, my mother never questioned her experiences of birth until, several decades later, she began to hear a new narrative from the baby they had taken to the nursery – me.

In the midst of my own pregnancy journeys, I started to ask questions. ‘How far past your due date were you?’, ‘Why did they shave women – was there any evidence to support this practice?’, ‘Did you ask for the pethidine?’, ‘Did they give me formula in the nursery?’.

‘I don’t know. You didn’t really ask questions then.’

‘Why didn’t you just tell them you wanted to keep your baby with you?’

‘Well… they just didn’t let you do that I suppose. It just wasn’t allowed.’

‘They did not let me’, ‘I was not allowed’… you would think these two phrases would be confined to the history books. And yet 32 years later, they were to become part of the fabric of my own first daughter’s birth story, when I was ‘not allowed’ a home birth but instead ‘had to’ be induced because I was past my expected due date, and then ‘had to’ have a forceps delivery, because current policy ‘did not let me’ spend longer than two hours in the pushing stage.

There were countless other small incidents during my pregnancy, labour and birth in which what was about to happen to me was presented as ‘policy’ or ‘procedure’. The professionals I met were kind and caring, but I did not feel like I had been given a choice.

As a new mother, I contemplated all of this as I sat on my stitches and nursed my newborn in the long, isolated hours so typical of modern motherhood. I wondered – as an educated woman with a reputation for being ‘opinionated’, ‘persistent’, even ‘nasty’ (depending on the viewpoint of the observer) – how had this happened to me?

I had laboured, as I had wanted to, free and naked, in a nest of blankets and cushions on the hospital floor. I had groaned and chanted, unfettered by drugs. And as I lay on that floor I had connected with my inner wild woman, with my maternal lineage, and with all the women who had been on this epic journey to meet their babies before me.

But somehow, I had been woken from this deep, almost hallucinatory trance, and moved from this place. A man had come and told me my time was up. I had been taken to the bed. I had been made to put on a shirt and cover my breasts. My feet had been placed in stirrups. I had said no to all this, but I had been told I ‘must’.

Indeed, ‘laminated’ birth plans seem to stand as a metaphor for a really organised and strong-minded woman who misguidedly thinks she can have any power in the birth room. In his bestselling memoir, This is Going to Hurt, former obstetrician Adam Kay recollects a woman with a ‘nine page birth plan, in full colour and laminated’, who has abandoned it – ‘hypnotherapy has given way to gas and air has given way to an epidural’ – and is now headed for surgery due to ‘failure to progress’.

This, he says, does not surprise him: ‘Two centuries of obstetricians have found no way of predicting the course of a labour, but a certain denomination of floaty-dressed mother seems to think she can manage it easily’, is his summary.

Such attitudes pervade modern maternity care. I hear them embedded in women’s birth stories daily, but if you don’t believe me, you only need at look to the media reaction to celebrity births to find more of the same. My first ever paid gig as a journalist was to write about how the press were bullying Kate Middleton about her plans for a natural labour and hypnobirthing, and we’ve seen similar mockery of Meghan Markle in the run up to the birth of her first baby. “A doula and a willow tree”, a leading obstetrician apparently joked, “Let’s see how that goes!”.

The willow tree, like the floaty dress, is an attempt to poke fun at ‘earth mothers’ who want everything to be ‘natural’, and neatly portrays Meghan as demanding enough to want a particular kind of tree at her birth. It’s all intended as humour, but underneath the surface is the rather chilling idea that a kind of satisfaction or sense of triumph might be gained from seeing a woman’s ideal hopes for her birth go to the wall.

In Ireland, the Eighth Amendment – which gives the pregnant woman and the foetus equal rights in law – has recently been repealed, but the legacy of hundreds of years of blurred lines between church and state mean that women’s rights in birth still have a long way to go.

Here, midwives in Dublin reliably inform me, a woman with a birth plan and strong ideas about what she wants is commonly referred to as ‘a difficult woman’ by her care team. Indeed, in early 2018 an obstetrician from a Dublin maternity unit, Dr Aoife O’Malley, described women who make birth plans as ‘middle-class birthzillas’, adding that her audience of fellow birth workers would ‘know the women because we’ve all had them’ who ‘think they are the only woman who’s ever given birth and they certainly think they are the only woman giving birth in the labour ward that day’.

Selfish, opinionated, controlling and difficult: women can often be to be treated like wayward children when they try to create this grown-up document. Lawyer and board member of Human Rights in Childbirth, Bashi Hazard, has described the birth plan as ‘the closest expression of informed consent that a woman can offer her caregiver prior to commencing labour.’

Hazard also reminds us that the medical institutions where we birth will always have a birth plan themselves; ‘one driven purely by care providers and hospital protocols without discussion with the woman.’ An intelligent consideration of birth plans reveals that they are a fantastic opportunity for women to consider their many birth options and open a meaningful dialogue with their care providers about their choices.

Why would anyone find this problematic, one wonders? 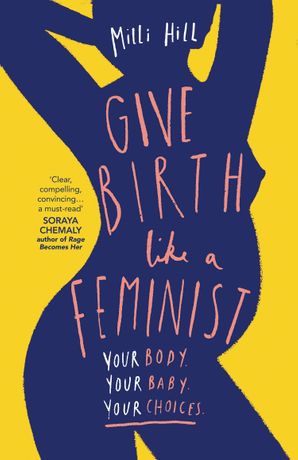 Extracted from Give Birth Like a Feminist by Milli Hill (HQ by HarperCollins, approx €17), out now.