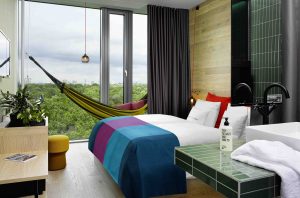 Berlin – 25hours Hotel Bikini Play “count the exotic animals” while swinging from one of the many hammocks, dining in the rooftop restaurant or ensconced in a window seat at this quirky, millennially-minded hotel overlooking Berlin Zoo. Interiors are as plant-festooned as they are eclectic – guest rooms come in two themes, “Urban” and “Jungle” – and there’s an in-house bakery, plus bikes to borrow. Rooms from €170. 25hours-hotels.com 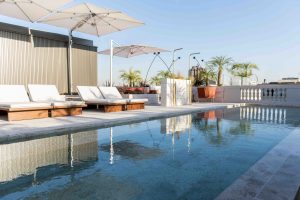 Barcelona – Almanac The first in a new chain of boutique boltholes, Almanac Barcelona made a grand entrance to the city’s luxury hotel scene when it opened its doors in late 2017. From contemporary design and swirling staircases to rooftop bars and treatment rooms, it guarantees a memorable experience from start to finish – the hotel even has a signature scent created for it by master perfumer Jimmy Boyd. Rooms from €400. almanachotels.com 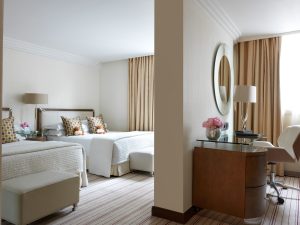 London – The Marylebone Bright colours, delicious food and a trendy neighbourhood are all part of the charm of The Marylebone. Vibrant soft furnishings sourced from local designers showcase the best of British across its 244 bedrooms and its 108 Brasserie spills out on to the street, making for ample people-watching opportunities during the summer months. Amazing rooftop terrace suites too. Rooms from £168. doylecollection.com 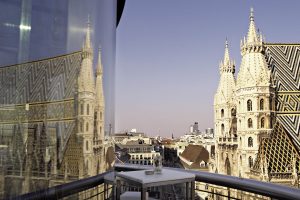 Vienna – DO & CO Hotel Designed as a futuristic shopping mall by Hans Hollein in the 1980s, the Haas Haus building’s curved windows overlooking St Stephen’s Gothic cathedral work equally well in the swish Onyx Bar on the sixth floor. This 43-room five-star has an enviable central location for those seeking in-the-thick-of-it sightseeing, while its high-spec – and high-tech – interiors marry teak, stone, marble and glass. Rooms from €266. designhotels.com

This article featured in the April/May issue of Cara magazine, the inflight publication of Aer Lingus. For the best fares, visit aerlingus.com.