3 Exhibitions to See in Dublin This Month

From ?a?concise’selection of drawings by the archetypal Renaissance man to an influx of new contemporary Irish art, May is shaping up to be a’marvellous month for exhibitions in Dublin. Here are three you should do your best to catch…?

The selection of drawings by Leonardo da Vinci currently being displayed at the National Gallery of Ireland is the sixth in a series of touring exhibitions on loan from the Royal Collection at Windsor Castle, but the first to make it across the water to Ireland.

Each of the ten drawings has been carefully selected to?express the broad scope of da Vinci’s interests: Spontaneous sketches of an infants limbs in various states of movement at one end of the spectrum, complicated astronomical diagrams at the other. An exquisitely detailed map of the Arno river sits somewhere in between.

Taken together, the drawings provide a fascinating insight?into both the intricate workings of da Vinci’s’mind and the cultural and political context in which he developed his skills. A sheet of studies of cats in different positions (incidentally a major a crowd pleaser at the showing I was at) demonstrates the growing interest in drawing from life during the Renaissance, while another page depicts pen and ink plans for a casting of an equestrian monument that was never finished. After the French invasion in 1494 the bronze intended for the sculpture was appropriated by the Italian army to create a cannon, and da Vinci’s clay model was ultimately used for target practice by French archers.

Tickets for the exhibition are free but pre-booking is essential.

Having focused primarily on the work of Scandinavian artists since establishing their Dun Laoghaire store last year,?Dr Louis Weyhe Funder and Klaus Kristian S’rensen of Nordic Makers?have decided to expand their scope this year and include works by exciting young Irish artists.

Jenny McConnell’s pieces are on display at Nordic Makers until June 4. See here for opening hours.

Famous for his small-scale still-life oil paintings, award-winning Tyrone-born artist Comhgall Casey is a regular at the Solomon – this is his fourth solo show with the gallery.

This exhibition features his trademark intimate studies of everyday objects like fruit, vegetables and children’s toys, of which Casey explains that by not imbuing them with any sense of narrative his intention is, “to give an importance to these objects, to convey their tangibility, to freeze their presence.”?It also includes?his’most recent annual self-portrait. 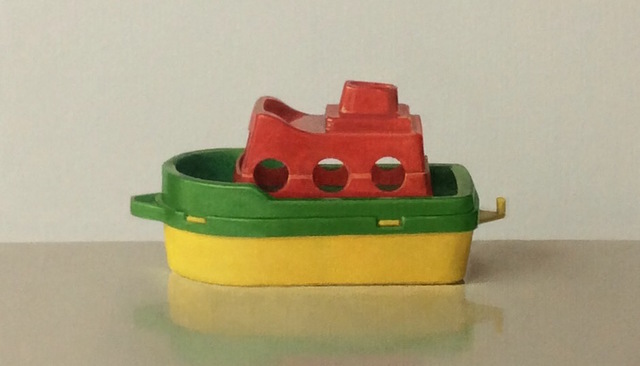 The exhibition at the?Solomon runs concurrently with a’mid-career retrospective, currently taking place at the Strule Arts Centre in Omagh and charting his development from his early school days to the present day.