‘The internet is our everything’: running a small business in rural Ireland

Leaving cities for home places in rural Ireland has been a necessity for many during the pandemic, and now it is quickly looking like an appealing long-term prospect. But how feasible is it? We catch up with a small business owner who left Cork City.

Although she always wanted to run her own small business, Olya Bazyliuk paid her bills by working in the cities of St. Petersburg and Cork doing IT, social media management and portrait photography. However, two years ago, her position was made redundant at Apple and she saw it as her chance.

“I thought that it was destiny to start doing something I was passionate about. First, I started as a soap maker, and then last summer I created Little Leaves Studio, selling air plants and macrame. At first, my only clients were friends and family members, but soon word of mouth worked and people began to arrive.”

While the business is figuratively – and literally – flourishing, it wasn’t a complete linear line for Olya and her partner Ken, a freelance text editor. “We always wanted to live in the middle of nowhere, in the mountains, near the ocean. At first, we were looking for a house in Bunbeg, and we found a small cosy place on the Atlantic coast and signed the lease.”

The joys of Donegal were short-lived, however. “Unfortunately, the house had a huge problem with internet and we broke the contract.” They couldn’t get connected as the copper wiring would have needed to be completely reinstalled, which they only found out after a technician came to test the connection.

With a pretty broad mission to find somewhere nice on the west coast, near to the ocean, the couple landed on a nice place, with reasonable rent. This time, they checked out the broadband situation first.

“We found this beautiful house near Glenbeigh with the most wonderful landlady and the kindest neighbours. We had visited the area a few times previously and were quite familiar with the it. We actually had to rely on a local ISP Ivertec with wireless line of sight internet for about a year because it took so long to install, but they did a very good job in the meantime.” 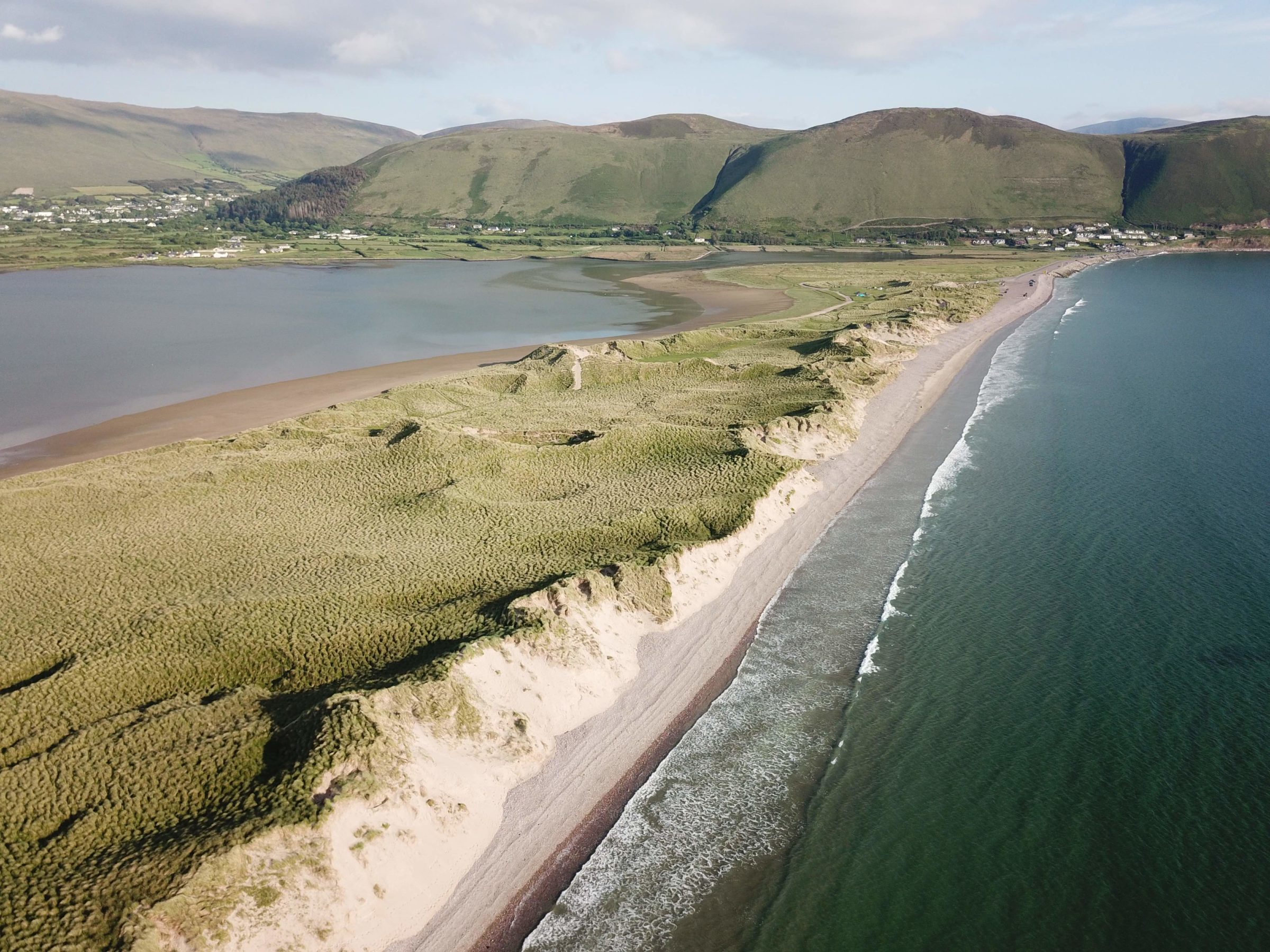 The couple now live on the Ring of Kerry, on the top of a mountain with a view of Rossbeigh beach. “If you ever take a drive from Cahersiveen towards Glenbeigh by small rural roads, you would definitely be jealous of people who live here. I still see myself as a city person though. Sometimes I miss city life, the social life and the culture but I also really enjoy the quiet country life too.”

Of course, working rurally needs supports, and Olya is grateful for the kindness of neighbours who helped get them online. “The internet is our everything, especially as we rely on it for work. When we moved in, it was surprising that the house wasn’t even connected to a phone line. Luckily, there is fibre broadband on our road so we eventually got connected.

“Our very kind neighbour Paddy helped us to get connected by doing some excavating and connecting the house with the phone lines. I don’t know what we would do without him. Now we have super-fast, unlimited internet.”

Working hubs in towns have been suggested by some as an alternative to getting high-speed broadband into every home in Ireland, which would see people commuting short distances to work. “It would be good for the sense of community,” Olya says. “Realistically though, I think that many people would prefer to have a good internet connection at home and have the possibility to work to their own schedule out of a home office.” 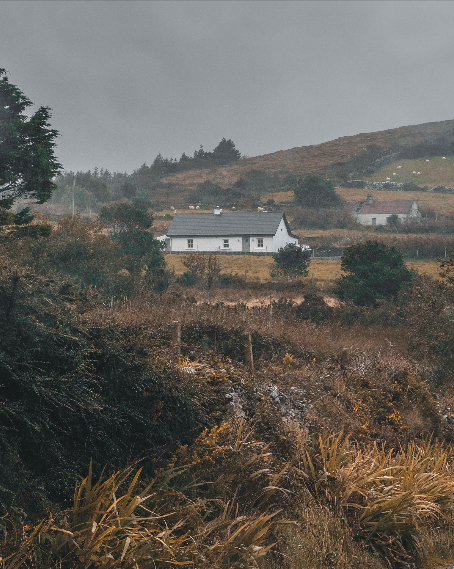 The landscape feeds into her work as she collects driftwood and shells from Rossbeigh beach, and these gifts from the Atlantic Ocean often set the mood and tone of a future piece. Olya also chronicles her travels around the west of Ireland, and beyond, with Ken, at @theislanders.ie.

“The first thing that amazes you in Ireland after living in a big city, is how everything is so close to you. You are surrounded by beautiful nature, wild landscapes, a real ocean, and picturesque mountains are just an hour’s drive from home.”

After moving to Kerry, the couple renewed their camera equipment and started travelling around Ireland taking landscape photographs. “We are trying to look at it with fresh eyes and bring something new, to show the same Ireland but from our perspective.”

The Irish landscape, and especially the landscape of Kerry, is a huge source of inspiration. “I have never lived somewhere so beautiful. The view from my windows is just like music for the eyes. Sometimes I’m even jealous of myself, especially nowadays, when we don’t have the freedom of travelling.”

For creative minds, Olya enthuses that being surrounded by beauty makes you want create something beautiful. “The shapes, the colours, the textures I see every day, I use them in my work.” 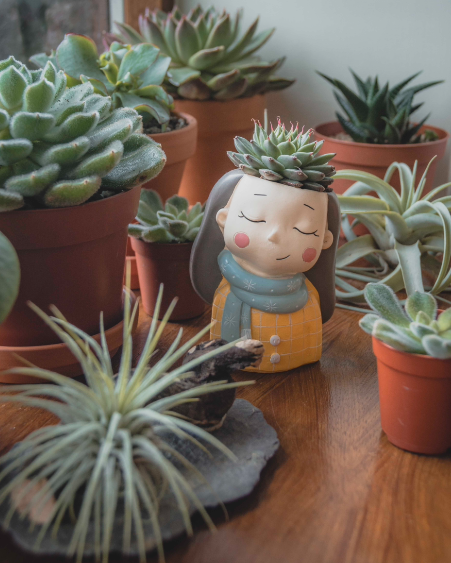 Hard lessons have been learned in the last few months. “This pandemic situation taught me to be thankful for what I have, and to be patient,” says Olya. “There are thousands of people working to keep our lives and businesses running. In this situation, the best thing to do is to help the community and to share.”

Both Olya and Ken are making a living from their combined incomes, “Business on Etsy is very sales-dependent,” she warns. “There are weeks when I do not make many sales, but overall it is a good way to make a living.” 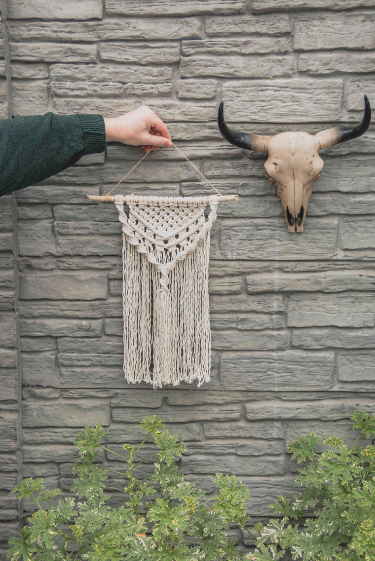 Having grown up surrounded  by her mother’s plants and a self-described “macrame nerd” as a child, Olya has made a business from a hobby, but would she recommend it? “I think it’s great to take something you are truly passionate about and make it a profession, but you should be prepared for all the possible pitfalls. I go to the markets and sometimes I see people with amazing products struggling to make money,” she says.

“But at the same time, I see happiness in their eyes. People do what they love. At least you should use the chance. We live just once, so why not try? You can always go back to your office job.”

Tried & Tested: ‘I went to a plant-based hair salon (with edible ingredients!) and my hair has never been shinier’