Getting noticed both for her cutting-edge couture collection, and for the methods she uses to make her designs, Sarah O’Neill is the Irish creative you’re going to be hearing a lot more of this year.

The woman behind the fabulous hats that appeared in the December 2021 issue of Vogue (you know, alongside Lady Gaga), Sarah O’Neill has always been drawn to fashion.

Deciding to turn her passion into a career, she went straight from secondary school to NCAD where she studied Textile Art and Artefact. From there, she moved to LIT to study Art Direction for Film and TV. Ultimately textiles won her over again though as it allowed her to focus on her two favourite things: colour and textures. “It’s a well-known fact in my family that I never wear black,” she jokes. 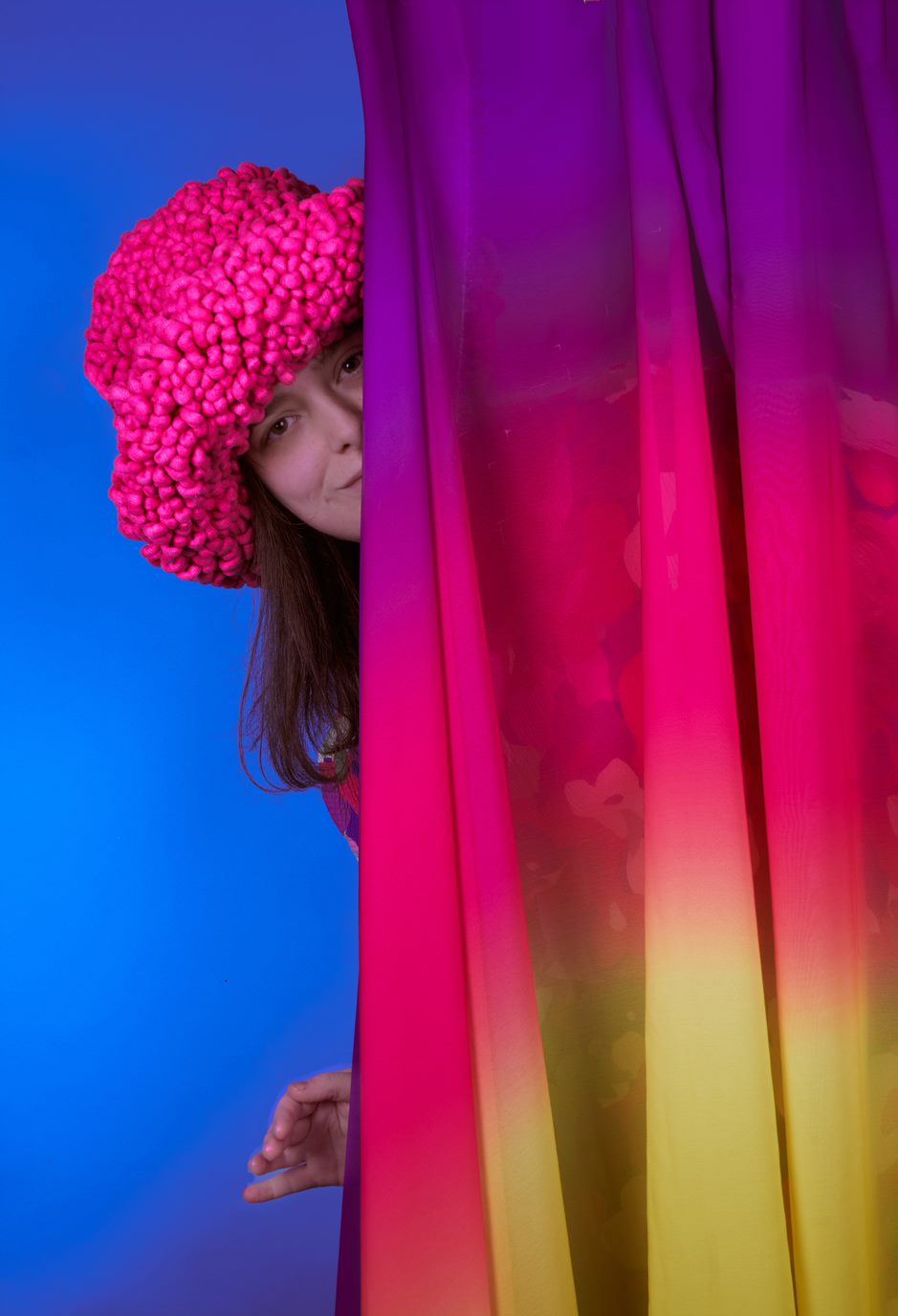 The proud recipient of the staff prize during her time at NCAD, Sarah bought a 3D printer with her winnings which later earned her the Thomas Dammann prize and enabled her to travel to Japan.

“During my time at NCAD, I taught myself how to use 3D software and aimed to explore its potential for textile design. My final graduation piece there was a 3D-printed fashion collection where I hacked the printer to make silicone embellishments and 3D prints. A few years later I discovered hat design as a platform to allow me to explore complex textiles and use animation and 3D software to design wearable hats that wouldn’t have been feasible to do on a large clothing piece,” she explained.

Recently launching her new collection, this one centres on the theme of how technology can be used to transform the digital into the physical. “The aim of our hats is social; to trigger touch, conversation, inspire joy, to use technology to bring people together through textiles.

“In the age of the digital touch screen, we aspire to human connection. The hats evoke the reaction of touch through their tactile nature both at the shop stage and the wearing stage. Customers often say that their friend’s automatic reaction to seeing them wearing one of my hats is to reach out and touch it. This prompts a human connection and conversation,” Sarah continues. 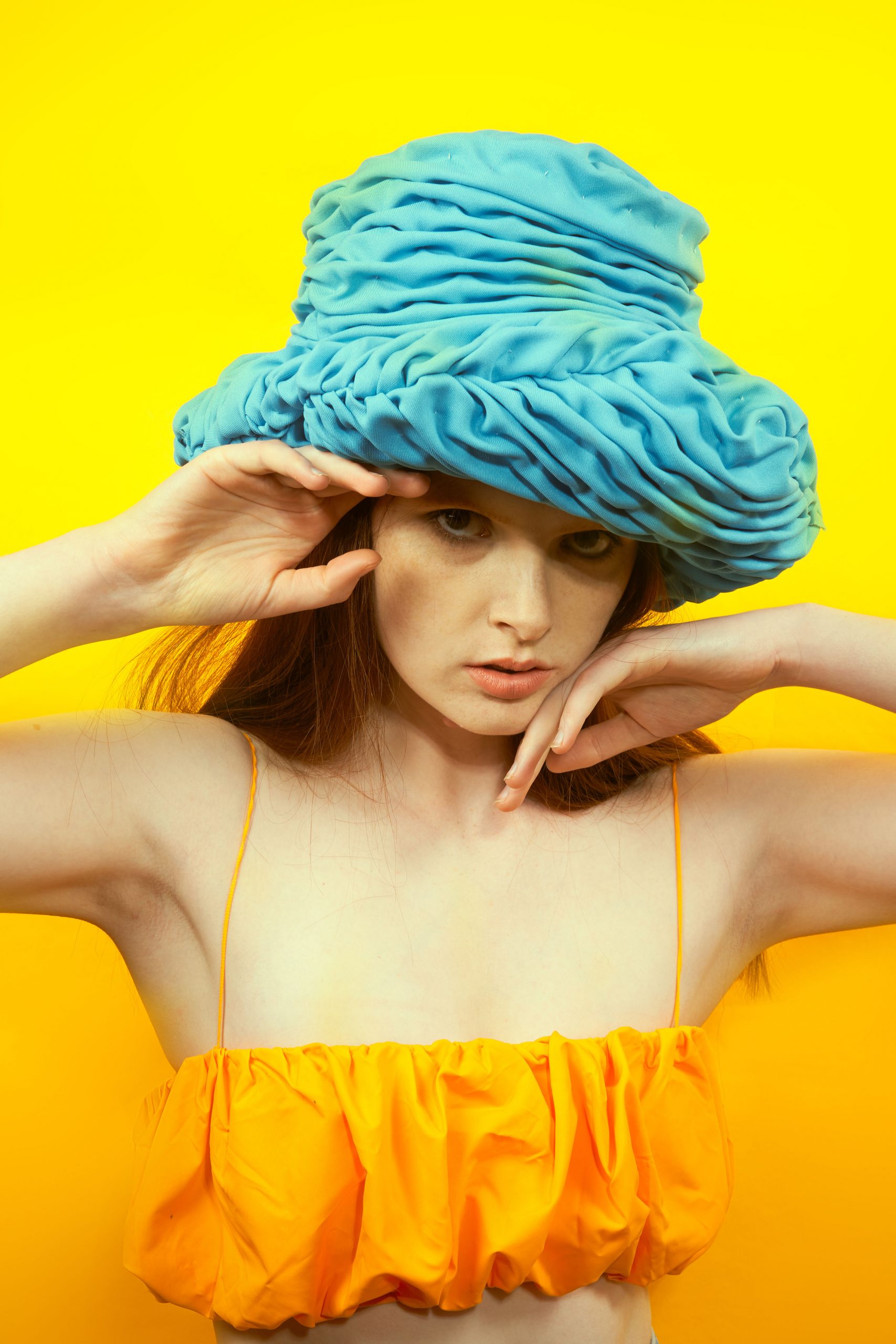 How exactly does she make each hat? There’s quite a lot involved, actually. “I begin by sculpting digitally on 3D software to get a sense of the texture of the hat. Then, I digitally paint if it involves a print. Next, I transfer the 3D model to Japanese software where I can print or further edit the design on Illustrator.

“After that, I go back to animate the hats for my Instagram page or website where they can be seen floating, exploding or dancing (@sarahonstudio). After I have printed off the hats, I subvert traditional techniques such as smocking (which is the gathering of thread hand-stitched to create texture) or tufting (which is the punching of yarns into cloth – a technique typically used for creating rugs) among other techniques. All the fabrics in the collection are hand manipulated so each hat has its own unique look and each one takes two weeks to make by hand.”

Asked about her proudest achievement to date, the young designer says that the Vogue feature was a definite highlight. “I am really proud that my work was chosen for the Lady Gaga December issue ‘It’s a Trip’ shoot styled by Kate Phelan and shot by Rafael Pavarotti. The colours and atmosphere of the shoot couldn’t have been more in-line with my brand.”

Describing her own personal style as “colourful and bright, but never black”, the resulting images very much reflect that and definitely make a bold statement. How did it all come about? Quite organically, actually. “The fashion assistant at Vogue emailed me out of the blue one day and asked for specific hats from my Instagram.” All she knew was who the shoot was going to be styled by and who the photographer was, everything else was a surprise. A good one at that.

Very much in favour of the slow fashion movement, Sarah later touches on the importance of sustainability in her work, telling me that it’s a great way to support local people. “Slow fashion encourages slower production, unifies sustainability with ethics, and ultimately invites consumers to invest in well-made and lasting clothes. The fabrics are bought as needed and not in bulk so there is little waste. I try to buy locally where I can and my printed fabrics (which are going to be launched at Showcase Ireland) are made in Donegal with sustainable inks. All the hats are made in my studio by hand in Rathfarnham which helps to bring local people together.” 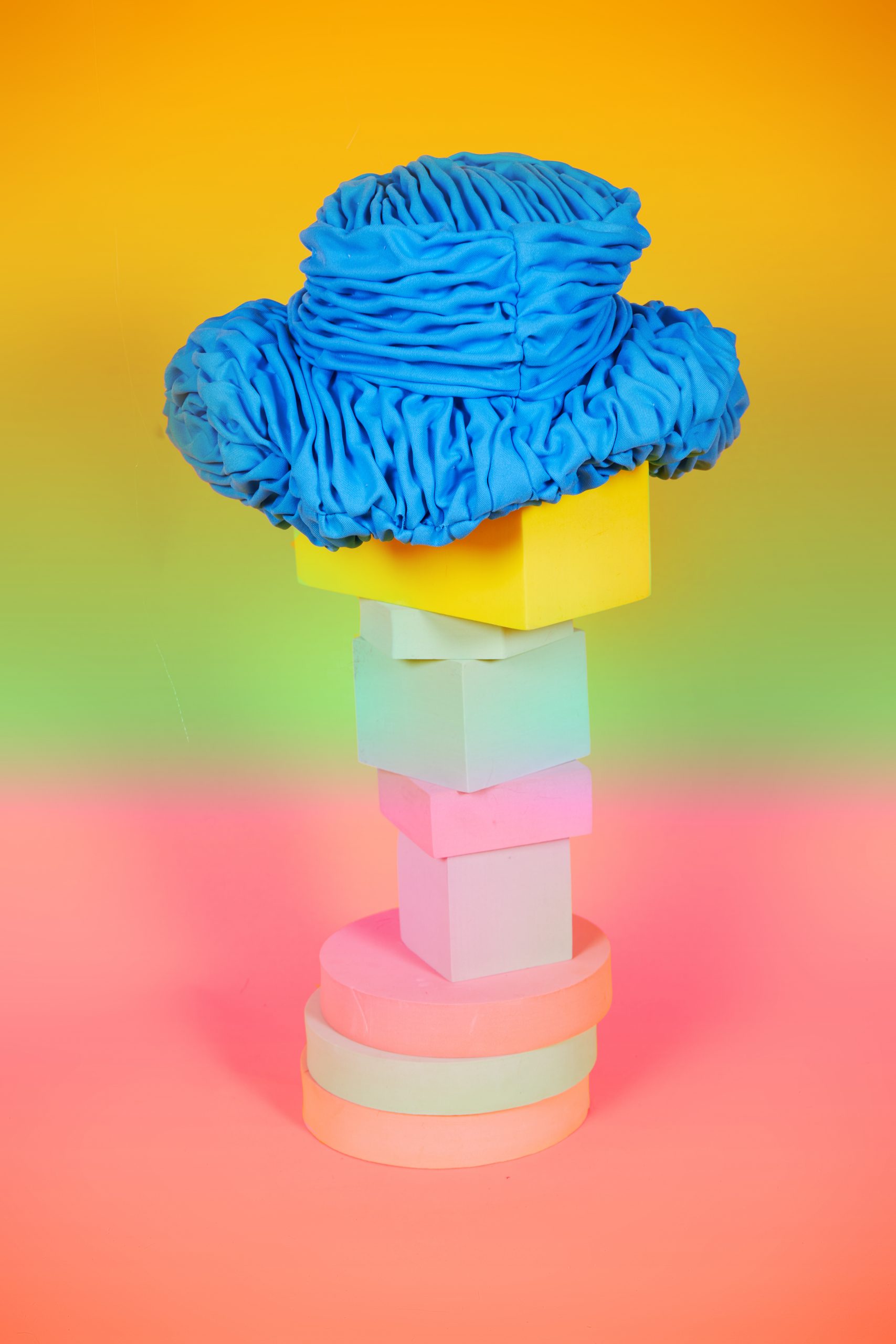 Already having achieved great success with her work, the Irishwoman still has big plans for the future and lists off several different designers she’d love to collaborate with. “I really love Japanese designers like Junya Watanabe or Comme Des Garcons. They really appreciate craft and texture. The Japanese really have a unique sense of style and craft.

“Naoshima Art Island in Japan was a true inspiration. It’s an island with a small population, but it’s full of modern art for tourists to explore, including work by James Turrell and Yayoi Kusama… I wish Ireland had an art island like Japan, but full of work by Irish artists!”

Irish Design Shop’s spring collection has sustainability at its heart

WIN a teeth whitening bundle, including a sonic toothbrush

The Internet’s favourite sustainable haircare has landed in Ireland