In just three days a racially aggravating video campaign has tainted 33-years of heritage at Dolce & Gabbana, leaving the future of the house in uncertainty.

The ‘instructional’ videos entitled “eating with chopsticks”, (part of Dolce & Gabbana’s #DGLovesChina campaign) feature an Asian model in ornate clothing being instructed, in Mandarin, how to eat pizza, cannoli and spaghetti by a male voice-over. The video goes a step further by targeting the Chinese demographic as a tired and false stereotype of people who are “lacking refinement/culture to understand how to eat foreign foods and an over-the-top embellishment of cliché ambient music, comical pronunciations of foreign names/words, and Chinese subtitles”, according to Diet Prada, the industry-famous Instagram account noted for exposing corruption, designer imitation, discrediting slander, lack of representation, exploitation, sexual harassment, and general unwelcomed behaviour in the world of fashion.

#DGlovesChina ? More like #DGdesperateforthatChineseRMB lol.  In a bid to further appeal to luxury’s covetable Chinese consumers, @dolcegabbana released some hella offensive “instructional” videos on the usage of chopsticks.  Pandering at it’s finest, but taken up a notch by painting their target demographic as a tired and false stereotype of a people lacking refinement/culture to understand how to eat foreign foods and an over-the-top embellishment of cliché ambient music, comical pronunciations of foreign names/words, and Chinese subtitles (English added by us), which begs the question—who is this video actually for?  It attempts to target China, but instead mocks them with a parodied vision of what modern China is not…a gag for amusement. Dolce & Gabbana have already removed the videos from their Chinese social media channels, but not Instagram.  Stefano Gabbana has been on a much-needed social media cleanse (up until November 2nd), so maybe he kept himself busy by meddling with the marketing department for this series. Who wants to bet the XL cannoli “size” innuendos were his idea? Lmao. • #dolceandgabbana #altamoda #rtw #dgmillennials #stefanogabbana #shanghai #chinese #italian #cannoli #meme #wtf #dumb #lame #chopsticks #foodie #tutorial #cuisine #italianfood #asianmodel #asian #chinesefood #dietprada

The video was posted ahead of the fashion house’s “Great Fashion Show” in Shanghai, a $12 million production that was abruptly cancelled following co-founder Stefano Gabbana posting racial slander on his personal social media. In screenshots posted by Diet Prada, the verified account of Stefano Gabbana is seen sending out messages which read, “From now on in all the interview that I will do international I will say that the country of [series of poop emojis] is China” and “China Ignorant Dirty Smelling Mafia,” among other insults. 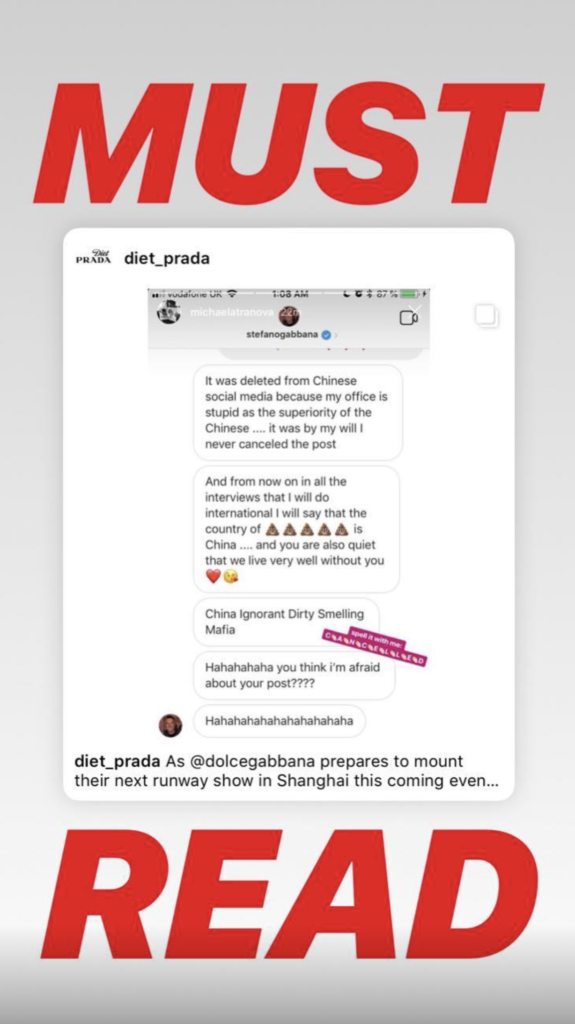 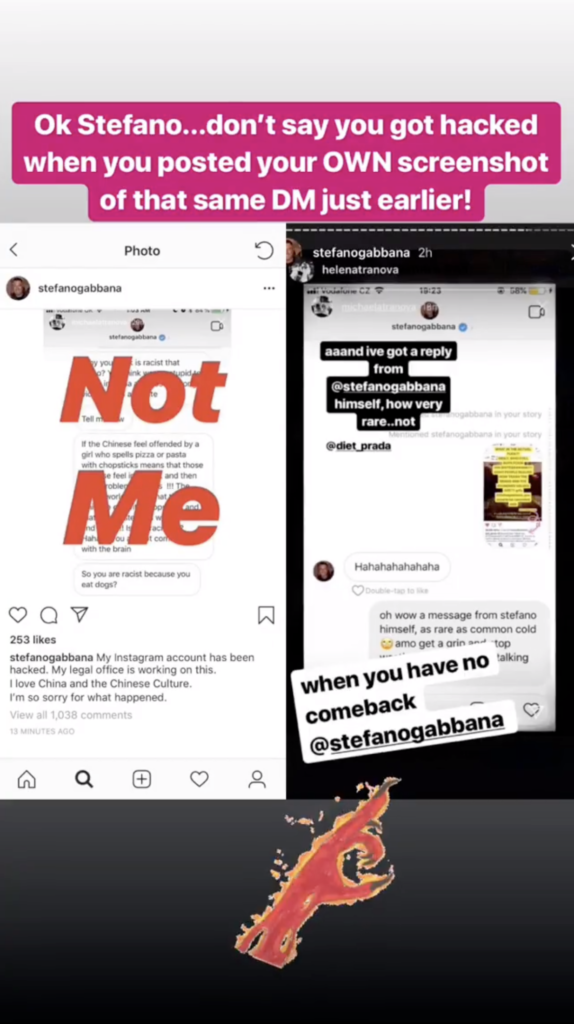 Following the series of distressing instant messages on Instagram, Stefano Gabbana reported that both his and the official Dolce & Gabbana Instagram accounts had been hacked. The VIP guest list due to attend the multi-million dollar show, which included China’s biggest influencers and celebrities, quickly abated. It’s reported on WWD that China Bentley Modelling agency released an official statement to say that 24 of their models who planned to walk in the show were boycotting the event.

“My Instagram account has been hacked. My legal office is working on this. I love China and the Chinese culture. I’m so sorry for what happened,” Gabbana wrote on his personal page.

The fashion house also posted on social media saying: “Our Instagram account has been hacked. So has the account of Stefano Gabbana. Our legal office is urgently investigating. We are very sorry for any distress caused by these unauthorized posts. We have nothing but respect for China and the people of China.”

Arguably two of the most iconic figures in fashion, Domenico Dolce and Stefano Gabbana have been celebrating the glamour and culture of Italy through clothes since the ‘80s. Dolce & Gabbana has since been dropped by multiple retailers across China as well as international retailers including the YOOX Net-a-porter Group, and the catwalk showcase has been cancelled indefinitely by the Cultural Affairs Bureau of Shanghai.

Former fans of the brand took to social media to record videos showing themselves discarding D&G-branded clothing, while police have been dispatched to flagship stores in Shangai because of threats of violence to staff.

The question on everyone’s lips: can D&G ride out this social media storm? Or will Stefano Gabbana’s lack of online filter be the abolition of his own label?