‘Trust me, guys’: The sell-out post that prompted Kardashian fans to finally turn on their idol

We all know that worshipping at the altar of appearances and gimmicky weight-loss fads is so 2019. So why didn’t Khloe Kardashian get the memo?

“The only way to lose weight is to eat more healthy food and train” ranted fitness fan Vogue Williams who accused Khloe Kardashian of tricking fans into buying a Flat Tummy Shake for the ‘sake of a quick buck’.

The US-based mogul faced backlash from her followers after urging them to buy a ‘shake-like’ product that could help them achieve a slimmer-looking midrift.

She told her followers: “I’ve posted with @flattummyco’s Shakes many times in the past and YES, I also use a personal trainer and a nutritionist. But seriously guys, everything counts. THESE SHAKES WORK to help get that tummy back to flat, especially after a super busy holiday season, and that’s exactly what I’ve been doing.”

Mother to the adorable Theodore, Dubliner Vogue Williams hit out at reality star saying that the post ‘annoyed’ her and that the shakes were ‘ridiculous’. Vogue posted on her Instagram stories: “Flat tummy shakes DO NOT WORK. This is all done for money, please don’t believe it. The only way to lose weight is to eat more healthy foods and train. Shame on you Khloe Kardashian, you know this is bulls***.”

She added that although she is a fan of the Kardashian franchise, this was a step too far. “Money isn’t everything and they shouldn’t be pushing ridiculous products on people who trust them.” 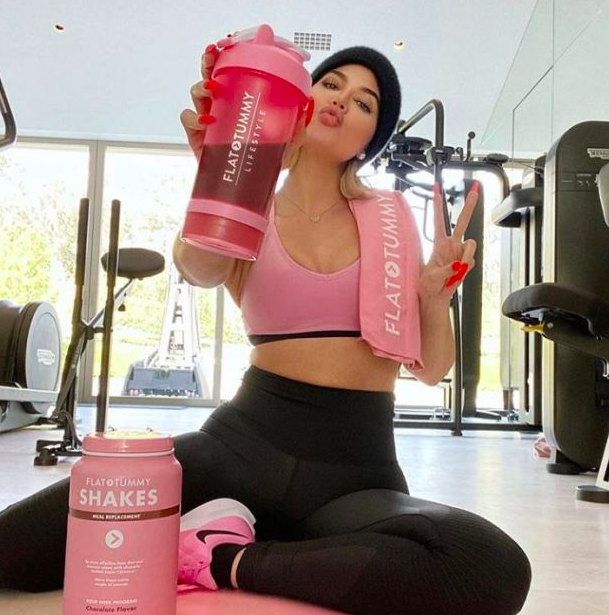 In the post uploaded by Khloe Kardashian, she is sitting cross-legged at the gym on a yoga mat, posing in fitness gear and showing off a pink Flat Tummy Shake bottle to the camera. She continues: “Start 2020 off right and get back on track, their New Year, New Tummy Sale is in full swing. Trust me, guys…”

Former Britain’s Next Top Model contestant Holly Carpenter was one of the first of her followers to call her out. She wrote: “Ffs girl” with a hand-in-your-face emoji indicating the misstep. Meanwhile, body-confidence activist Jameela Jamil also added her own take to the controversial paid partnership. She has been critical of Khloe Kardashian in the past for promoting weight-loss products, urging her to please be ‘smarter than that’.

This week she shared a screen-shot of the post writing ‘Blah blah blah eating disorder culture blah blah, captioning the picture with: IS SHE POOR?’

She messaged the Keeping Up With The Kardashian’s star directly months back, writing: “It’s incredibly awful that this industry bullied you until you became this fixated on your appearance. That’s the media’s fault. But now please don’t put that back into the world and hurt other girls the way you have been hurt.”

Many fans too felt that this latest post was a step too far for their idol. “Stop posting this garbage,” wrote one. Another said: “Love you and love your commitment to health and fitness. But pushing these products is wrong. They are not about health.”

There are thousands of comments calling her out for collaborating with the brand that promotes the so-called ‘diet culture’, saying they are disappointed in such an alignment. “You were the only real one, in my opinion. But this…. no, we are done.”

Instagram user Mimi86 hit the nail on the head. “Stop posting this nonsense. You have such a good platform to be a great role model. What the hell are you doing?”

‘Selling out’ to your fans and asking them to ‘trust you’ risks exploiting the already confusing relationship between celebrity and follower. Could this be the beginning of the end of this type of advertising by this type of celebrity?