During her recovery from an eating disorder, Vicky hired a personal trainer to rebuild

After struggling with an eating disorder,  Vicky Cornick hired a personal trainer to help her rebuild her fitness and strength, against medical advice.

It’s hard to imagine Vicky Cornick, a bright, beautiful and strong young woman, ever struggled with body image and self-acceptance. But at the age of 15, the young Dubliner moved to Florida alone to train as a professional tennis player.

“It was amazing and terrifying. Everything I did was controlled and I developed an eating disorder in my second year.”

Things got so bad that she was flown home and admitted to hospital, where she stayed for 14 weeks in recovery. On being discharged (and against medical advice), Vicky hired a personal trainer to help her rebuild her fitness and strength.

A journey of self-discovery began and a year later, she decided to train as a personal trainer.

She is now teaching clients how to embrace health and fitness in their lives.

What does beauty mean to you?

When I was younger, I probably would have said it’s how you look. But I’ve met people who look beautiful but are not very nice people, so I think beauty comes from the heart as well as what you look like. It’s not about how pretty you are, but could be about how you smile. Everyone has it, but it’s about how they express it. Someone who is happy and confident and likes themselves.


When have you felt most confident or beautiful?

I feel like a superstar today having my hair and make-up done! I was very down on myself as a kid. I used to look to my older friends or cousins and think they looked amazing, but never felt that way about myself. But now, doing a job I love and helping other people brings me joy and a lot of happiness and I feel I’m on the right track.

Strength plays a huge part in it. I’m probably the strongest I’ve ever been and this is the most confident I’ve ever felt.

How has your perception of beauty changed?

It’s changed a lot. Going through that time when I suffered from an eating disorder, I criticised myself so much. It was difficult when I was regaining weight and my clothes were gettings smaller.

That was hard, but now I couldn’t care less because I’m getting stronger. Now, I’m trying to show or teach other women that getting their focus on strength and off dress size is so important.

It’s not bad to want to look good, but it’s got to be about strength too. 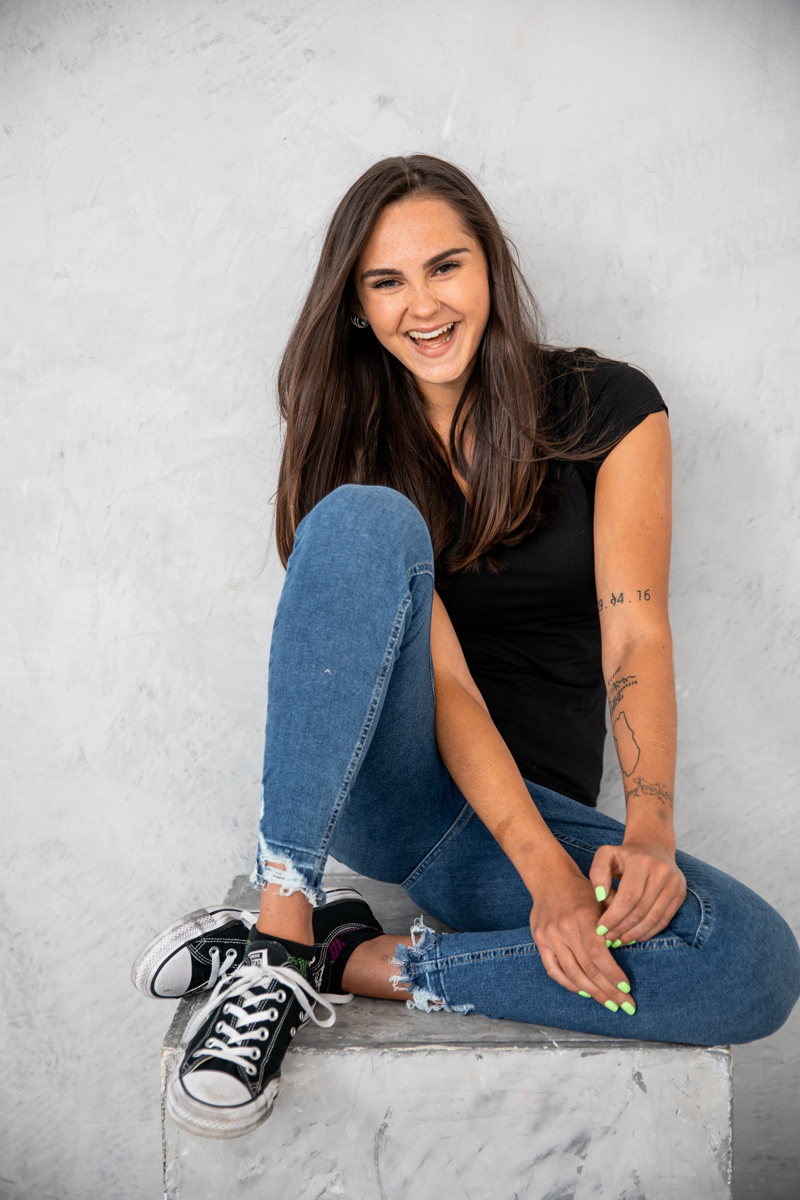 Where do you think the pressure to look a certain way comes from?

Social media. As great as it is at times, I wish we didn’t have it too. I still compare myself to famous models or bloggers who have thousands of followers.

I’m better at it now because I’m stronger, and I realise they probably don’t even look like that.

Social media definitely has a part to play in how we view ourselves as women and we’re all our own worst critic. A lot of people love us more than we love ourselves.

What would you say to the child you were back in Florida if you could?

The first year I had the best time and was the most sociable person. In the second year, it was like I flicked a switch and became so shy and introverted I couldn’t speak to people.

I would tell myself there’s so much more to life than worrying about food and numbers and being the best at everything. There is so much more you have to experience. Don’t waste it.

I’m trying to remind myself if it doesn’t matter in five years time don’t worry so much about it. I’d tell myself to chill and enjoy school.

It’ll all get real very soon.