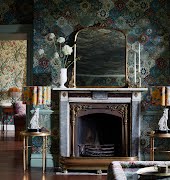 A young couple bid on the wrong property at an auction, but have spent over two years restoring it themselves on a shoestring budget.

It had the potential to be a total nightmare: spending tens of thousands on a property you didn’t intend to buy, one that was recommended to be torn down. However, a determined, can-do approach has seen one young couple turn this potentially catastrophic mistake into an inspiring restoration project.

Cal, now 28 and Claire, now 26, met skiing in the French Alps, road tripped across Europe, and spent a summer in Claire’s native Canada. After a few adventurous years, they wanted to tackle a project together, and decided that refurbishing a house would be a good place to start.

They did their research and picked out a property in Glasgow to bid on at auction. They had visited the site and were confident that the work required was within their abilities. However, the lot before the one they were bidding on, Jameswood Villa, was split into several units, which hadn’t been mentioned in the auction booklet, leading to the couple mistakenly bidding for (and winning) a property they didn’t want.

What they had bought was half of Jameswood Villa, a Victorian stone building located in a small village about an hour and a half from Glasgow. It had been left empty for 20 years, had huge holes in the roof, and such serious structural problems that they were advised to knock it down by their structural engineer. None of this was obvious from the information provided by the auctioneer.

Before they could do anything, they had to address the problem that they owned just a half of a derelict house. At the auction, the third apartment from Jameswood had been sold to a different buyer, but when this man saw what he had purchased, he offered his apartment to Claire and Cal immediately, which they were happy to buy from him.

However, the owner of the fourth apartment was unknown. The couple eventually tracked them down, and offered to buy it, but the owner put it up for auction instead.

On their blog, the couple say “We didn’t want someone to over-bid on the apartment, thinking they were getting a great deal. If the price was pushed up too much, we wouldn’t be able to afford it, and buy the whole building. So we made a blog.”

It had up-to-date photos of the house (the ones on the auction site were ten years old) and its full address listed on every page. They hoped any prospective bidder would come across it, but unfortunately it didn’t work, and someone bought the apartment for more than they should have.

But a few weeks later, the new buyers’ solicitor saw the blog, and showed it to his clients. They were shocked at the real condition of the house, and happy to see a couple who was determined to fix the building, and kindly sold the apartment to Cal and Claire at a price they could afford.

This was just the beginning of their long journey. Over the last two years, with very little budget, the couple have taken on the restoration of the house themselves, with the help of friends and family. They live in a small caravan on the property and have slowly become experts on bringing an old house back to life.

They have documented their progress on their Instagram page, which now has 185,000 followers, while those that want more in-depth information on everything from digging foundations by hand to DIY-ing a painted-glass window can go to their blog, where they have shared lots of helpful information.

The house is still unfinished, but the amount of work that the couple has achieved is remarkable. We’re going to be eagerly following the rest of their journey on Instagram, and can only imagine how emotional it will be the day they can finally move in.

What to eat this weekend: Oh, Mon Dieu, French Toast