You know the feeling. It rises up from the pit of your stomach almost before you even remember that embarrassing thing you did approximately 3 years, 8 months and four days ago. The heat sizzles on your cheeks, you get that feeling in your toes like you’re looking over an edge from a great height and you probably make some kind of involuntary noise that is totally out of context with where you are. It’s such a universal feeling that there’s an entire TikTok trend about it.

Rachel Bilson was on Dax Shepard and Monica Padman’s Armchair Expert podcast earlier this week and recounted exactly one of those moments. “I get really hot and start sweating… I’m all nervous, like, ‘Oh god! What did I do?’”, she told the hosts. She was talking about receiving a DM on Instagram from her high school friend Rami Malek.

It all stemmed from a photo of the two of them that she had recently shared. Malek had been sweeping the awards season with his performance as Freddie Mercury in Bohemian Rhapsody and was just about to win his Best Actor Oscar. Wanting to show her support for her childhood friend, she posted a picture of the two of them on a class trip to New York. “Rami was a good friend of mine [in school],” she explains “We were in the same crew, we did The Crucible together senior year, we were the leads in it together, all these things.”

So Bilson posts what she describes as “just the dorkiest picture of the both of us. But I throw it up because it’s funny and I think it’s so important to be able to make fun of yourself.” A week passes by and she checks her DMs, only to see a message from Rami. Which is, shall we say, concise. 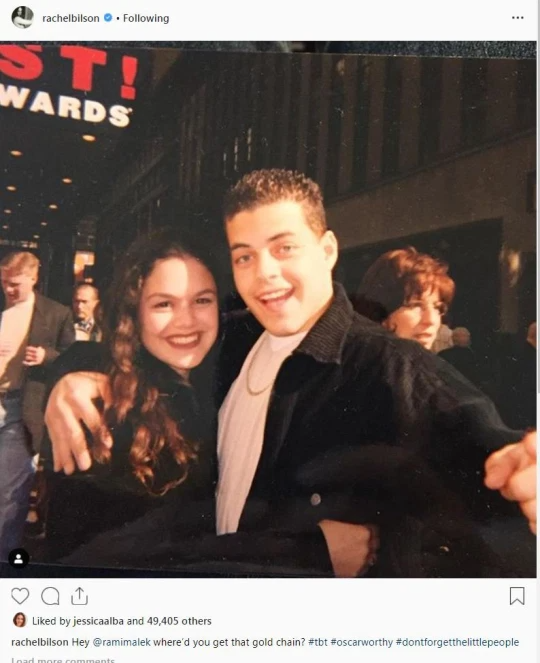 “It wasn’t like, ‘Hey, how are you?!’”, she says, “it was straight to: ‘I would really appreciate if you take that down, I’m a really private person.'” Cue the sweaty palms and inexplicable heat.

She quickly removed the post and responded to him, apologising and wishing him luck at the Oscars, to which she got no response. While Bilson felt that it was a light-hearted poke at an old friend, she later heard from a stylist friend that Rami wasn’t thrilled with her choice of photo, apparently not loving how he looked. Bilson said she was “just a little bummed at how it was handled.”

The sidenote here is that she’s Rachel Bilson. She’s cute even when she’s young and dorky. That was her entire M.O. on The OC (hello, Princess Sparkles). Rami, less so and I can kind of understand why he wasn’t thrilled with the picture. But still, at least it’s good to know that we’re not the only people who manage to accidentally stick our foot right in it and then dwell on it for years after.

And really, the joke’s on Rami, because when you Google “Rami”, currently the third auto-fill option is “rami malek rachel bilson photo”. Maybe the real lesson is that the internet lives forever.