LOS ANGELES, CA - SEPTEMBER 10: Jacob Pechenik (L) and actress Zooey Deschanel pose at the after party for the premiere of Roadside Attractions' "The Skeleton Twins" at The Argyle on September 10, 2014 in Los Angeles, California. (Photo by Kevin Winter/Getty Images)

UPDATE:?Zooey Deschanel has revealed the name of her baby daughter, who she welcomed to the world in the summer. Like Carey Mulligan and Keira Knightley, Zooey and her husband Jacob Pechenik went with an old-fashioned name:?Elsie Otter. Well, about 50% traditional English garden old fashioned. The other half is veering on Gwyneth Paltrow territory, but we think it works? Especially considering Zooey’s queen of quirk status.

Zooey shared the details on the red carpet for the New York premiere of her new movie Rock the Kasbah,?clarifying that Elsie’s unique second name was the same as the riverside creatures.??Like the animal,? she told the press, Stylist reports.

What do you make of Otter as a second name? Cute, or potential playground insecurity issues?

Deschanel and Jacob Pechenik have been engaged since January, just shortly after the news of their pregnancy broke. Pechenik is a movie producer and met his wife on the set of Rock the Kasbah in the summer of 2014. They began dating soon after meeting but have generally kept out of the public eye. 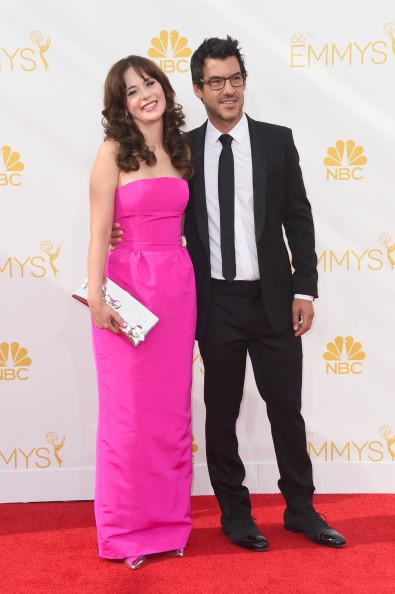 The actress’s representative confirmed the couple had made things official, referring to Pechenik as Deschanel’s husband in a statement announcing the birth. This is the 35-year-old actress? second marriage. She was married to Death Cab for Cutie’s Ben Gibbard for three years, with the couple separating in 2012.

As for the baby news, Deschanel and Pechenik’s daughter was born in Austin, Texas, her daddy’s hometown, and the couple’s representative said the new arrival was ?a beautiful healthy baby girl.? No news on a name yet, but expect to wait a while. After Blake Lively and Ryan Reynolds kept James under wraps for so long, the usually private Deschanel might let her daughter’s name slip in maybe two years time. Celebrity fact: Jamie Bell and Evan Rachel Wood still haven’t told the press the name of their son who was born in 2013.