Shop Irish this Christmas: Meet the shopkeepers of Hen’s Teeth in Dublin

THE CAREER COACH: Seminar 3 Your Boundaries

The top baby names of 2021 have been revealed and there are a few surprising...

“Tell me about your despair, yours, and I will tell you about mine.” The words of American poet Mary Oliver have given many hope at this time. Amanda Cassidy looks back at her wild and precious life…

“I had a very dysfunctional family and a very hard childhood. To this day, I don’t care for the enclosure of buildings. So I made a world out of words. And it was my salvation.”

Pulitzer Prize-winning poet Mary Oliver died at the age of 83, on January 17, 2019. She first began writing poems at the age of 13 while walking in the woods with her dogs. The American writer was best known for her simple prose based around details from the natural world. Nature with its endless cycles of death and rebirth fascinated her.

In interviews, she often described her vocation as the observation of life – but it was the spirituality of her words that prompted critics to liken Oliver to poets like William Blake and Gerard Manley Hopkins. Her mantra-like words connected with those who couldn’t always pinpoint what they were feeling, or why.

Her prose jarred beautifully with those of us who craved that kinship that comes when you find words that put it better than we can sort out in our heads. 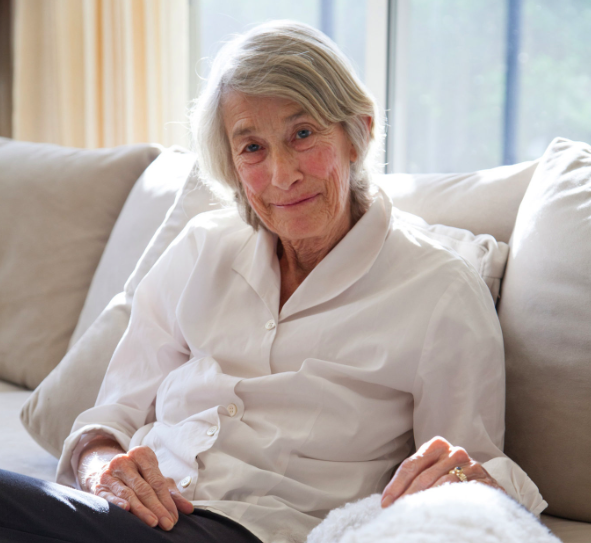 Oliver was born in 1935 in Ohio. Her father was a teacher and her mother a school secretary. The New York Times wrote, “In one of her rare interviews, with Maria Shriver in O: The Oprah Magazine in 2011, Oliver spoke of having been sexually abused as a child, though she did not elaborate”. She studied at Vasser College but took no degree. She eventually moved to New York. In the late 1950s, Ms. Oliver met Molly Malone Cook, a photographer ten years her senior, who became her life partner and literary agent. The two women remained together until Cook’s death, in 2005, at the age of eighty. All of Oliver’s books, to that date, are dedicated to Cook. 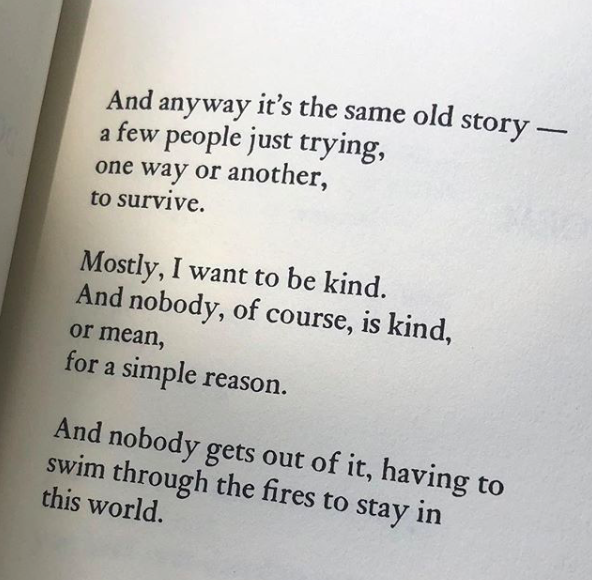 Oliver was just 28 when she published her first collection of poems “No voyage and other Poems”. Twenty years later, she won the Pulitzer Prize for her fourth full-length book, American Primitive. And yet still her prose divided critics. The subject matter of nature, animals and God was often dismissed as old-fashioned and too simplistic.  Critic David Orr laughed at the idea of using poetry to overcome personal challenges—“if it worked as self-help, you’d see more poets driving BMWs.” 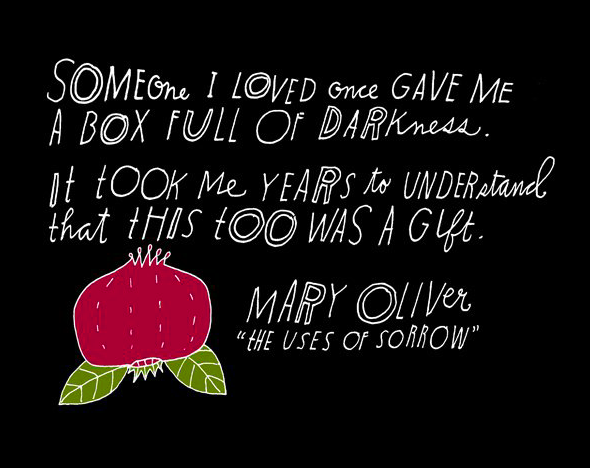 But the collision of poetry and popular culture was set in motion. Oliver’s popularity wasn’t so much the simple elegance of her observations but how the reader could interpret them as their own – a consolation of sorts. “Mary Oliver is saving my life,” wrote one of her many followers on her fan page just a month before her death. Her quotes are plastered all over Pinterest and Instagram as inspirational memes.  Gwyneth Paltrow reads her, and so does Jessye Norman, in fact, Cheryl Strayed used the final couplet of ‘The Summer Day’, as an epigraph to her popular memoir, Wild;

“Tell me, what is it you plan to do with your one wild and precious life?”

American journalist, Krista Tippet interviewed Oliver for her podcast, ‘On Being’ and referred to her poem ‘Wild Geese‘ as a “poem that has saved lives”. 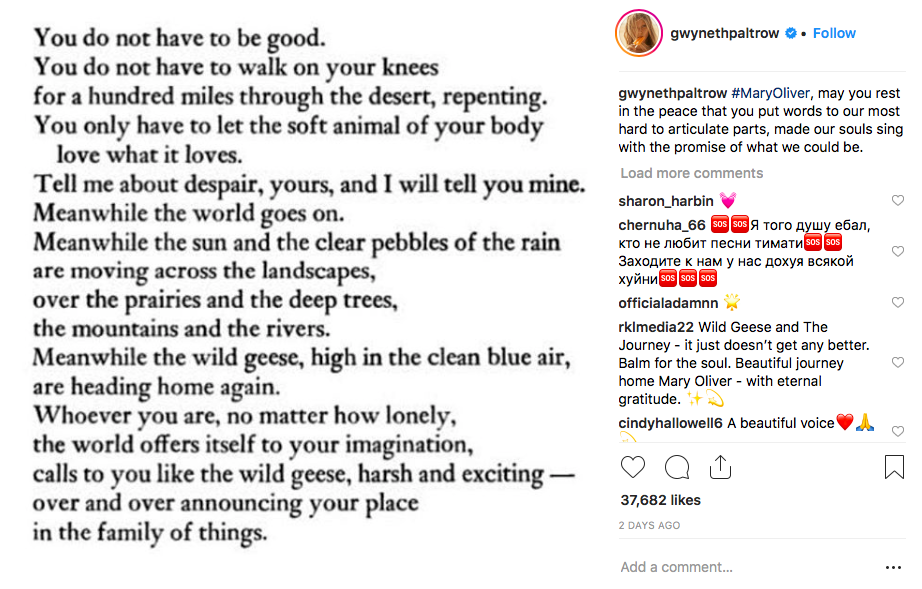 That consoling vision of the redemption possible in ordinary life is really what resonates with so many and the reason for Oliver’s unusually wide appeal to the mainstream. She seems to understand the internal battle between the primal joy and the primal despair of being alive. There is healing in reading that overcoming is organic, and that melancholy is matter-of-course. 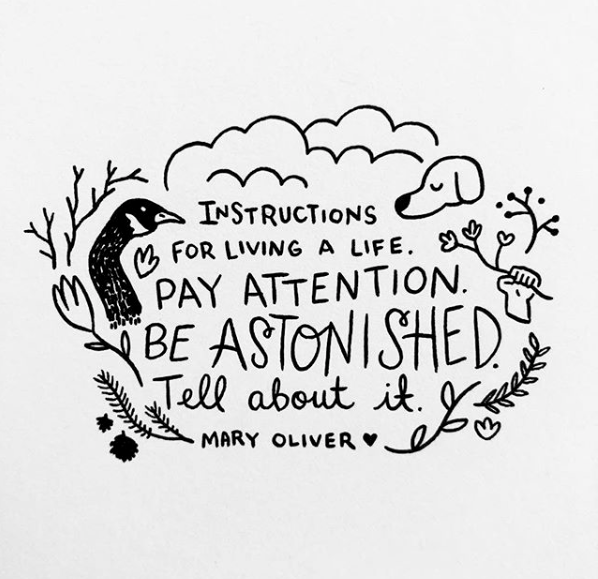 Journalist Ruth Franklin puts it best when she wrote in the New Yorker that, “Part of the key to Oliver’s appeal is her accessibility: she writes blank verse in a conversational style, with no typographical gimmicks. But an equal part is that she offers her readers a spiritual release that they might not have realized they were looking for.”

Her popularity comes from pointing out that the world goes on, that one’s despair is only the smallest part of it—“May I be the tiniest nail in the house of the universe, tiny but useful,” Oliver writes elsewhere; Whoever you are, no matter how lonely, the world offers itself to your imagination, calls to you like the wild geese, harsh and exciting— over and over announcing your place in the family of things”. 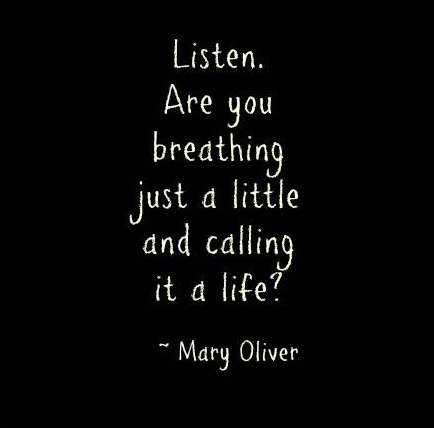 Part prayer, part self-belief mantra, part understanding our rightful place in the universe, there is a romance and loneliness to Oliver’s work that people want to hear.

She stood up and encouraged us to confront our dark places (under toadstools and into stagnant ponds) and she found grace. She discovered that she was allowed to love the world, with all its imperfections, and that it was ok to question how it felt along the way.

In one of my favourite poems “When Death Comes” she writes “I want to say all my life I was a bride married to amazement.” I think Mary Oliver’s poetry has helped us all to stay amazed. 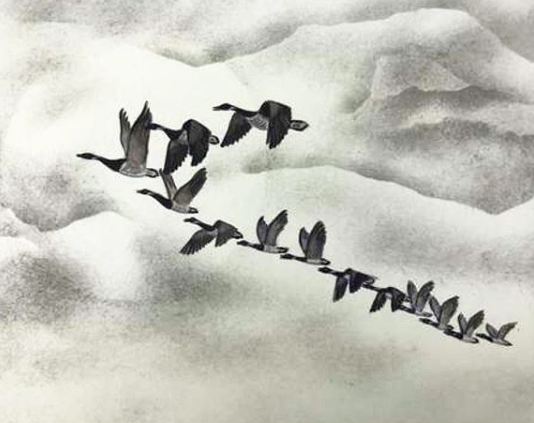 You do not have to be good

You do not have to walk on your knees

For a hundred miles through the desert, repenting.

You only have to let the soft animal of your body

Love what it loves.

Tell me about your despair, yours, and I will tell you mine,

Meanwhile, the world goes on.

Meanwhile the sun and the clear pebbles of the rain

Are moving across the landscapes,

Over the prairies and the deep trees,

The mountains and the rivers.

Meanwhile the wild geese, high in the clean blue air,

Whoever you are, no matter how lonely,

The world offers itself to your imagination,

Calls to you like the wild geese, harsh and exciting –

Over and over announcing your place

In the family of things.

When death comes like the hungry bear in autumn;

to buy me, and snaps the purse shut;

I want to step through the door full of curiosity, wondering:

what is it going to be like, that cottage of darkness?

And therefore I look upon everything

as a brotherhood and a sisterhood,

and I look upon time as no more than an idea,

and I consider eternity as another possibility,

and I think of each life as a flower, as common

as a field daisy, and as singular,

and each name a comfortable music in the mouth,

tending, as all music does, toward silence,

and each body a lion of courage, and something

precious to the earth.

When it’s over, I want to say: all my life

I was a bride married to amazement.

I was the bridegroom, taking the world into my arms.

When it’s over, I don’t want to wonder

if I have made of my life something particular, and real.

I don’t want to find myself sighing and frightened,

or full of argument.

I don’t want to end up simply having visited this world.