‘Without me, you are nothing’: The embarrassing celebrity sibling feuds being played out publicly

Psychologists suggest that parents should let young siblings fight it out. Conflict is good for them because it teaches them how to work out things with other people. But what happens when the bickering continues into adulthood? And in the public eye? Amanda Cassidy on the topsy-turvy world of famous sibling feuds.

When we were younger my parents often reminded us that we had a familial responsibility to have each other’s back as we grew up. We were raised to be loyal and to stick up for each other at every opportunity. Of course, that didn’t stop the raging rows and name-calling, but we eventually grew out of it and started treating each other as actual people and friends rather than doll-stealer or teddy-destroyer.

As we grow older, disagreements are only natural. We become our own people. While it is also common to hear of adult siblings who fall out, but ultimately there is always that tiny gap, the space in time that exists where we know how to get over it, how to compromise or how to move on. Pushing each other’s buttons is second nature and we are become very, very good at it.

But when arguements among brothers and sisters spill over into the public eye, things are never as easy to row back on. Ego surface, insults are exchanged and once you commit to writing a derogratory tweet about your relative, calling them a ‘bitter liar’ or worse… it is much more difficult to resolve.

When it comes to celebrity feuds, Liam and Noel Gallagher immediately spring to mind. These two brothers playing in a successful rock band is bound to stir up certain disagreements but the former Oasis members took things a step further when they ended up in court. In 2009, Noel accused Liam of not showing up at the V-festival where the band was headlining because he was ‘hungover’.

Liam took his brother to the High Court in 2011 saying that his brother was responsible for the band’s break up. Their relationship remains not only broken but toxic. Liam left the stage during Champagne Supernova at a gig in Italy. In an interview with Spin magazine in October that year, Noel said of his brother: “I’ve kind of learnt that instead of arguing stuff out with him and ending up in a fight, I work on his psychology and he’s completely freaked out by me now, He’s actually frightened to death of me.” The brother’s tweets are equally as painful. The back and forth exchanges are vulgar and designed to destroy the other.

Most recently Noel Gallagher told The Guardian: “I’ve got one fatal flaw in my otherwise perfect makeup as a human being, which is I don’t forgive people.” When asked if an Oasis reunion was possible, Noel responded that “Unless they’re doing it without me,” he said, “But without me, it would be rubbish.”

If intimidation and bravado is the way Liam and Noel Gallagher relate than it is passive-aggressive bitterness that prevails between sisters Nadia and Julia Sawalha. Best known for her controversial opinions on ‘Loose Women’ older sister Nadia this week discussed her volatile relationship with her actress sister Julia. Nadia believes their feud began in their childhood when their father pitched the two sisters against each other. 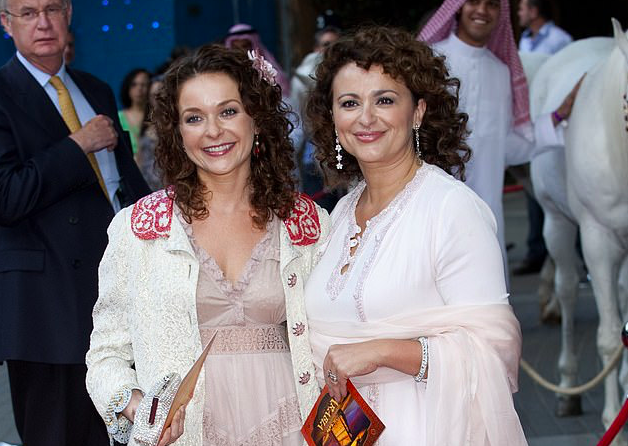 They also took to social media to play out their arguements. Speaking on Loose Women, Nadia explained how her father encouraged them to compete with each other. “My dad always says “formidable women”. That’s all he wanted. He came to this country with £50 in his pocket because he wanted six daughters who were free.’

“You have destroyed our family”

She admitted that growing up she was jealous of her little sister. “When my mum had Julia, I was so excited I kept wanting to pick her up and cuddle her. My mum, who was a bit postnatal, got scared and sent me to her mother’s. Julia was a beautiful baby and everyone was crazy about her, so my sister Dina and I were a bit jealous. And as she grew up she was very much “Daddy’s little girl”.’

The tiff seems to be based around her sister Julia’s former partner.  In a horribly public post, the Absolutely Fabulous actress hit out at Nadia accusing her of spouting ‘lies and rubbish’ to get attention.

She tweeted: ‘So tired of #nadiasawalha talking about our’stormy’ relationship which she created. I’ve kept my privacy for 6 years to protect my family, whilst she talks lies & rubbish. You have destroyed our family so don’t sit on TV with your fake tears to gain sympathy & attention”.

Blood might be thicker than water but that also means that they know exactly how to hit you where it hurts. But some advice to all those who want to air their dirty sibling laundry in public, it isn’t helping. All it is doing is giving tabloids the fodder they crave. Send a text, better still, meet up in private and sort things out (or don’t) but slugging it out on Twitter is never going to help.

Image via Irish Mirror
Read more: Celebrity causes: Activism or tokenism?
Read more: Why siblings are good for your health
Read more: Do these models owe their famous sisters?