The plot is simple: When aspiring Icelandic musicians Lars (Will Ferrell) and Sigrit (Rachel McAdams) are given the opportunity of a lifetime to represent their country at the world’s biggest song competition, they finally have a chance to prove that any dream worth having is a dream worth fighting for. It’s fun, it’s funny and it doesn’t take itself too seriously – much like the event itself.

“Lars and Sigrit come from the fishing village of Húsavík, Iceland. Sigrit is this music teacher,” Ferrell explains. “Lars gives out parking tickets in a town of 3,000 people. They have their own band, Fire Saga, and they’re very serious about their music — especially Lars. Despite everyone else’s misgivings about Lars, Sigrit is the only person who stands by him. She’s fascinated by him and his myopic journey.”

When an accident claims the top performers vying to represent Iceland at Eurovision, Fire Saga is improbably selected instead. “They’re fish out of water, and the competition is as spectacular as they ever hoped it would be,” Ferrell says. “They’re over the moon that there’s a minibar in their hotel room! It was key to make them two sweet and naive misfits who — when you finally get to see them perform — actually have some talent.”

The Eurovision Song Contest is an annual festival that began in 1956 and now spans 40-plus nations — including non-European countries like Israel and Australia — and is a beloved excuse for sensory overload. Widely seen as both a source of immense national pride (Ireland has still won the most overall with seven wins)  and international zaniness, this rhythmic extravaganza regularly boasts television audiences of 180 million.

Occasionally participants become iconic. Take Celine Dion: she claimed victory for Switzerland in 1988. Abba also won in 1974 with Waterloo and we’ve sung along with then in Broadway shows ever since.

Producer, co-screenwriter and star Will Ferrell who stars as Lars Erickssong (an innocent but driven man-child), has long loved the Eurovision experience. He spends every summer in his wife’s home country, Sweden, and her cousin got him hooked on the singing contest years ago.

“We watched this crazy spectacle for three hours,” he says. “There’s a level of camp that is unlike anything we have here in the U.S. In Europe, everyone has a Eurovision watch party. Some people are legitimately watching while others are making fun of it. But everyone tunes in and has to know who won. I immediately thought this would make a great backdrop for a movie: it’s a great playground for comedy. I assumed I would get beaten to the punch by someone in Europe — but no!”

Although Ferrell appreciates the competition’s hallmark melodrama and kitsch, he explained he was more taken with the overall spirit of positivity. “At Eurovision, winning is not as important as creating music and community,” he says, noting that the European Broadcasting Union (EBU) created the event as a way to reunite the continent after World War II.

To be as authentic as possible, in 2014, the filmmaking team travelled to Copenhagen to watch the finals and learn more about the competition’s planning and execution. “The EBU’s a unique organisation,” says Ferrell. “They know some people are a bit tongue-in-cheek about the whole thing, and they have a sense of humour. But they also know that this event is a big deal musically. I didn’t realise what a production it is until I actually went and saw the huge show they put on. They build the whole set from scratch only to tear it down when it’s over. It was really important for us to capture the scope.” 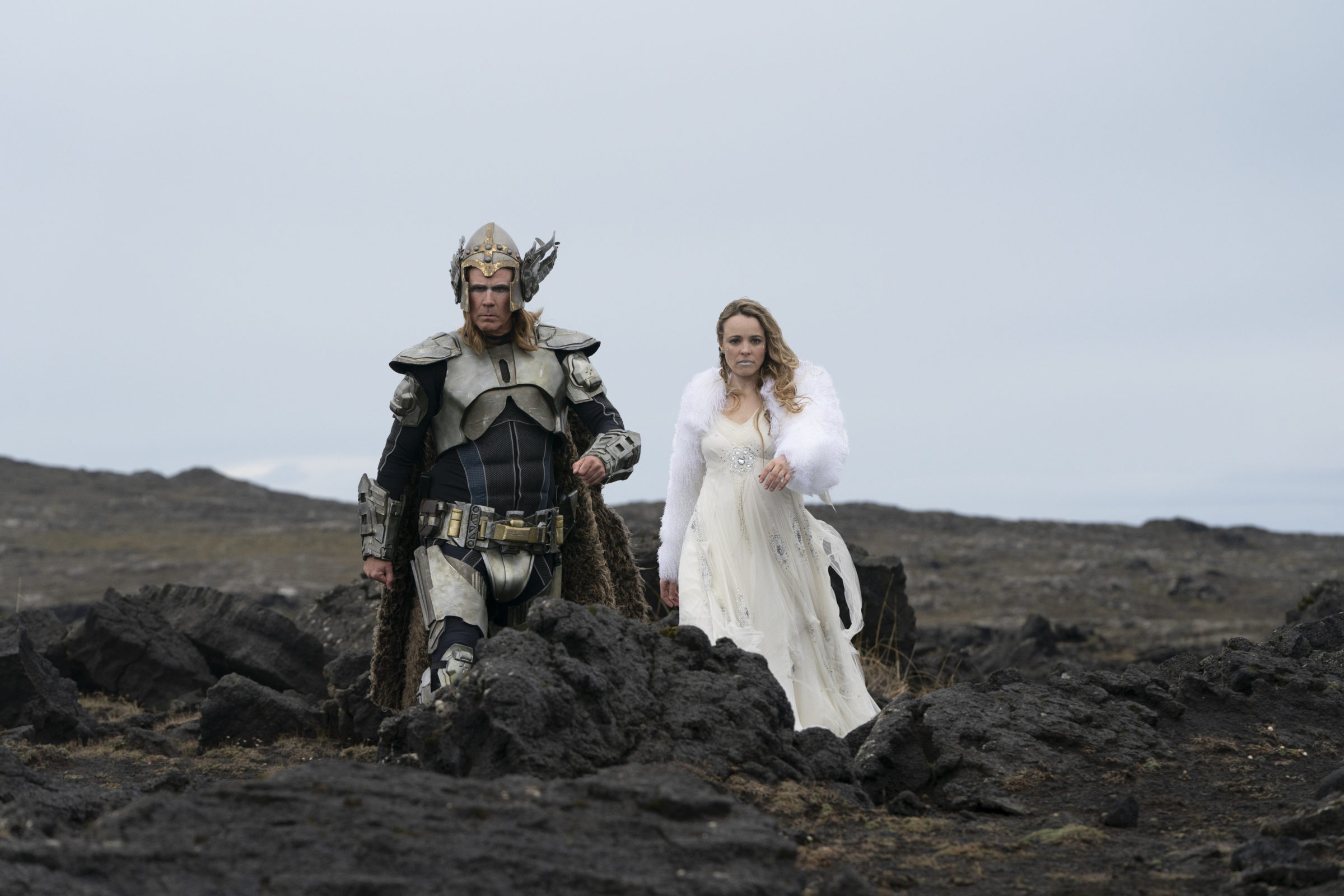 “I didn’t know much about Eurovision at first,” says McAdams, who is Canadian. “When I started digging into it, I couldn’t believe that the actual contest had been happening for so long. When we went to Tel Aviv to watch the rehearsals and finals, I understood why Will had been such a fan. It is just so massive, it’s kind of hard to digest all the moving parts. And the audience knows all the words to the songs in the finals. I got so carried away — we had to leave before the results and I had to be dragged out by the hair!”

Thanks to a number of cameos from real Eurovision stars, the film truly embodies what makes the Eurovision Song Contest great: the music. It features 12 original songs, including the song that propels Fire Saga to the Eurovision stage  “Double Trouble” one of the four co-written by Savan Kotecha, the film’s executive music producer. Kotecha has written pop songs for everyone from Ariana Grande (God Is A Woman) and The Weeknd (Can’t Feel My Face) to Demi Lovato (Confident), so you know the film is in good hands. 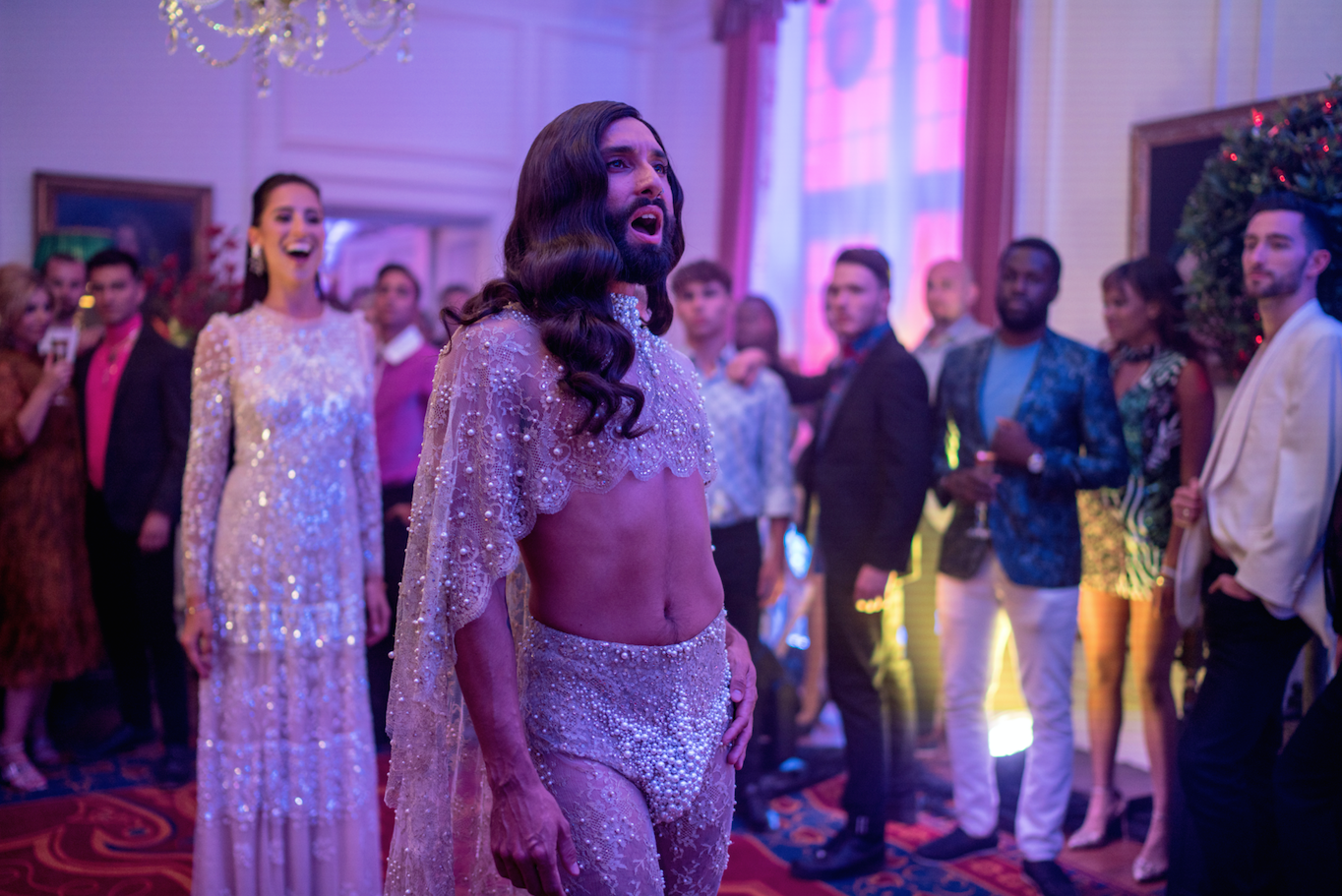 Each of the singers featured in the film is either a winner or fan favourite from past competitions, including stars like Conchita Wurst, Loreen, Netta, Alexander Rybak, Jamala, and last year’s star, John Lundvik from Sweden. There are even a few former contestants who you don’t see on screen, but you hear instead. The movie’s creators tapped Swedish singer Erik Mjönes and former Junior Eurovision Song Contest winner Molly Sandén for the singing voices of Alexander Lemtov (played by Dan Stevens) and McAdams’ Sigrit.

“It’s a film made with love,” says Ferrell.

“And for people who weren’t aware of Eurovision, it’s a great starting point,” adds McAdams.

Read more: Socially-distanced cinema: Why some films are meant to be watched alone