The death of legendary broadcaster Gay Byrne has been met with a national outpouring of grief, but in grief, the Irish come together

If there’s one universal truth about the Irish, it’s that we know how to grieve.

Death, with all its heartbreak and wretchedness, can sometimes offer the most sparkling moments of light and joy. It’s an odd juxtaposition but it’s a mix that us Irish have mastered. This has never been clearer than in the past few days. The death of legendary broadcaster Gay Byrne has brought the country to a standstill.

We aren’t quite sure what to do. But, at the same time, we do.

We know how to celebrate a life. To talk openly and lovingly and to offer a helping hand. We honour while we ache, and most importantly, respect who we have lost.

I visited the book of condolences for Gay Byrne in the Mansion House yesterday and I have never been more proud to be Irish. It was a sombre affair. A framed photograph of Gay was positioned on a table, while a candle was lit close by. I got chatting with a Mansion House employee who told me that an estimated 4,000 people had passed through the doors of the building to pay their respects. Four books were opened when I arrived, which had to be done to keep the queue of mourners moving freely.

I was told people of all ages had come from all over the country to send their message. The outpouring of grief has been astonishing, I said to the employee. “But sure, he was a great man,” he replied.

A family was leaving just as I arrived – the children born after Gay’s reign but it didn’t seem to matter. There was the older generation, who grew up with Gay and then there was my own age bracket – we were always aware of him. The man next to me wrote his message and then looked at his phone to write for others who couldn’t be there.

A message of thanks

There were thousands of messages. I read as much as I could before I began to feel like I was trespassing on another’s land. Those messages belonged to other people. They were not mine to share – each had their own stories and secrets to tell.

Looking through the books, I grasped that the prevailing message was one of thanks.

Thanks for making me feel less alone. 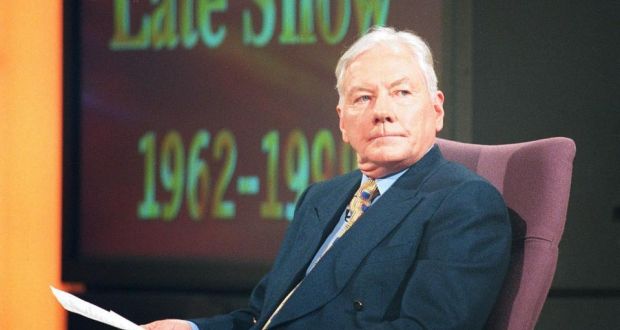 In a country of over 4 million people, very few would have personally known Gay, but for so many people they felt he was a friend. It’s easy to understand why. In an Ireland where the holy gospel was taken as absolute truth, Gay was a loveable maverick. Through a black box, he entered into the homes of Ireland like a welcomed visitor. He soothed the airwaves and accompanied people through the best and the bleakest days. In a world without streaming and satellite television, he was all they knew.

On RTÉ’s Late Late Show special which celebrated Gay, Tommy Tiernan spoke of the tribe mentality which accompanied the show, saying, “I think we really enjoy times where we come together as a tribe. The Late Late Show and his radio show were daily and weekly moments where Ireland as a country… it was like an international rugby match every weekend. We focused on this thing. We miss that.”

The TV special felt like the ultimate Irish wake. We gathered together like a clan. We sat around a television, enjoyed the stories and music, and reminisced. In grief, we come together for support. When death comes knocking, neighbours and strangers do their upmost to lessen the load. For families, this is a gift. For Gay’s wife and daughters, the support and outpouring of affection must be overwhelming.

I just missed Gay’s daughter Crona, who had left as I arrived at the Mansion House. She had called to say thanks and to read the messages left for her beloved Dad. The employees spoke of the kindness behind the gesture, and it was clear to see how much it meant to them too. This was a testament to the man. His kindness, which is spoken of in high regard, has passed to the generation below him.

I was 4 years old when Gay presented his last Late Late Show, but I knew even as a child that this man was important and most of all, brilliant. In the past few days, this has only become more evident to me. Without Gay and his radical broadcasting, the Ireland I grew up in might be a lot different. As a woman, my rights were so often hindered by oppression. Contraception, my bodily rights, my sexuality and my choices were frowned upon and discarded.

Gay gave a voice to women who made a difference. The country I live in now is more liberal and safe than many others in an increasingly troubled world. The cornerstones of the society which we now have were pushed through by Gay and his contribution to public service broadcasting. He gave the people what they wanted – a safe place for those who were marginalised. We are a better Ireland because of him.

So, I decided to say thanks too.

I wrote: Thanks, Gay.

Thanks for helping a nation to come alive.

Read more: Gay Byrne: 6 of our favourite Gaybo moments from years gone by

Grief at Christmas: ‘We won’t ever forget him but we will try to cope without him by doing things a little differently’